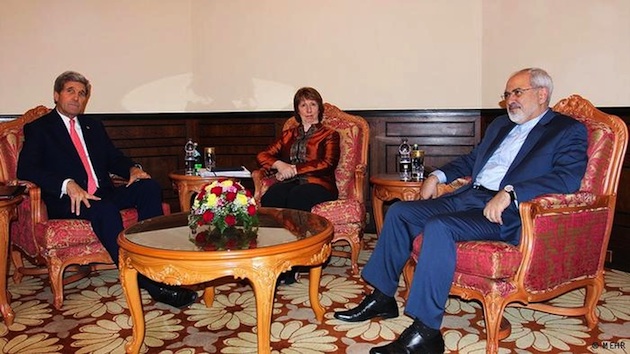 The Iran nuclear talks between Western diplomats and their Iranian counterparts hit a stalemate Sunday as the deadline to reach an agreement looms. The Wall Street Journal reported late Saturday that reaching a final agreement by a Monday deadline was “impossible,” according to a senior Western diplomat, despite the base principles of an agreement all but settled.

“We have reached a point in the talks where probably we can’t have an agreement without some very significant moves from the Iranians,” the diplomat told the Journal. “No one can say this is finished … The only thing is we can’t do the job for the Iranians.”

Reuters reported that the Iranian state-run ISNA news agency cited a member of Iran’s diplomatic negotiating team, who also said an agreement by Monday was “impossible.”

“Considering the short time left until the deadline and number of issues that needed to be discussed and resolved, it is impossible to reach a final and comprehensive deal by Nov. 24,” the official is quoted as saying. “The issue of extension of the talks is an option on the table and we will start discussing it if no deal is reached by Sunday night.”

On Saturday, U.S. Secretary of State John Kerry said that there remained “serious gaps” between the two sides. However, Kerry’s German counterpart, Frank-Walter Steinmeier, said the fate of the talks is “still completely open at this point.”

The Iran nuclear talks involve the United States, Britain, France, Germany, Russia and China. The nations began a final round of talks with Iran on Tuesday, which they hope will force Tehran to curb its develop of a nuclear weapon in exchange for lifting economically crippling sanctions.

While Kerry spoke on the telephone Saturday to Arab foreign ministers in the Gulf, many of whom have joined the alliance against the Islamic State, the leaders of the countries expressed their fear Iran’s potential abilities will move forward even if an agreement is reached on their terms. Canadian and Turkish counterparts expressed to Secretary of State Kerry much the same concerns. He also talked Israeli Prime Minister Benjamin Netanyahu by phone, but the State Department curiously gave few details of the discussion.

There are reportedly two key sticking points in the talks. First, the speed of sanctions relief and, second, the amount Iran would reduce its production of nuclear material. Iran wants the vast majority of U.S., E.U., and U.N. sanctions to be lifted if and when a deal is reached, but the West has said that sanctions levied by the U.N. in response to Iran’s nuclear program can’t be lifted before Iran has proven it holding to the agreement.

The U.S. has already scaled back sanctions at the direction of the Obama administration, which a bipartisan majority of senators have opposed.

As far as enrichment of nuclear material, Western officials told the Journal that any permanent agreement must ensure that Iran is at least a year away from producing enough nuclear material to build a nuclear bomb.

Meanwhile, The New York Times reported late Saturday that Western intelligence agencies are attempting to insert language into the final proposal that would ensure inspections, including a method of tracking the parts and fuel to and from any Iranian nuclear complex.

Iran reportedly has three major “declared” nuclear facilities, but it is know that there is at least two covert facilities located in Iran. U.S. officials believe that any nuclear bomb made by Iran would likely come from one of those places.

Fordo, which is know to be one of the covert facilities located in Iran, was outed publicly for the world to see by President Obama in 2009. The second such facility located at the city of Natanz is believed to house thousands of uranium-enriching centrifuges.