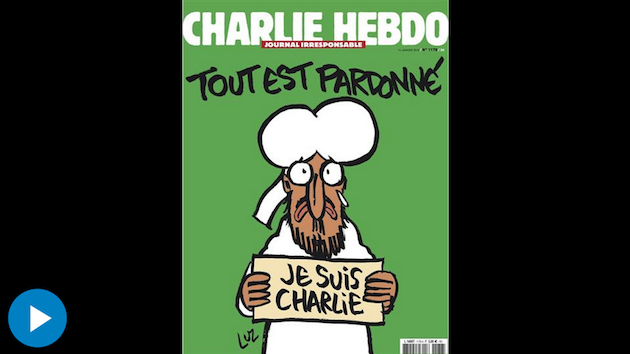 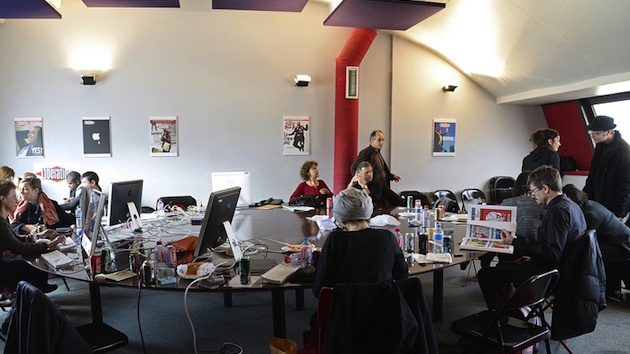 Contributors for the post-attack edition of Charlie Hebdo work on Friday at the offices of the newspaper Libération in Paris. (Photo: AP)

The Prophet Muhammad will be back on the cover of the next edition of Charlie Hebdo, below the message from surviving staffers “Tout Est Pardonné,” or all is forgiven. The French satirical magazine lost 8 out of the 12 people killed last week in an Islamic terror attack, including the magazine’s editorial director, Stephane Charbonnier, better known by the name “Charb.”

“It is we who forgive, not Muhammad,” editor-in-chief Gérard Biard said in a Tuesday radio interview with France Info. Biard said tomorrow’s issue is meant as both a memorial to fallen co-workers and proof that the magazine’s mission continues.

“We needed to figure out how to continue laughing and making others laugh,” he said. “We wanted to analyze, say something about the events. This drawing made us laugh. We did not want masked men on the cover. We didn’t want more of that. That’s not us. We didn’t want to add to the gravity. It helps to be able to breathe a little.”

While the paper’s usual print runs around 60,000 copies, the issue due out Wednesday will see a circulation of around 3 million. It will be released to the French newspaper Liberation.

The cover was created by cartoonist Renald Luzier, better known by the name “Luz.” Biard called the cartoon a “moving but not sad” work.

“Seen by Luz, Mohammed is much more sympathetic than even the Muslims see him. He’s a ‘nice little guy'” said Luz. “Those assassins killed people who draw nice little guys. We wanted to show the ludicrousness of it.”

When Luz showed the drawing to staffers, he was reportedly met with a room full of laughter, applause and joking shouts of “Allahu akbar!”

However, on Tuesday an official for Egypt’s Dar al-Ifta, an institute for the study of Islamic law with links to the Egyptian state, said the cartoon cover was an “unjustified provocation” for millions of Muslims who respect and love their prophet. The Dar al-Ifta is in charge of issuing relgious edicts, an allegedly more-harmful edicts, to millions of Muslims.

The official statement was a warning of an outpouring of hatred by Muslims in French and other Western societies toward non-Muslims, and called on the French government and other western governments to reject “the racist act.”which is in charge of issuing religious edicts,

The Muslim brothers angered over the publication’s past images of the prophet committed the terrorist massacre last week, shouting “We’ve avenged the prophet!” as they fled the building. The officials said the cartoon will spark more anger from millions of other Muslims who view Charlie Hebdo’s work as blasphemy.

Yet, despite the attempts to kill and intimidate, the outpouring of support has reinvigorated the newspaper and those who share their western values.

“It’s been extremely moving—and also hypocritical,” said Laurent Léger, a reporter for the magazine who survived the shooting told the Wall Street Journal. “All of a sudden, we are supported by the entire world. Whereas for years we were completely alone.”