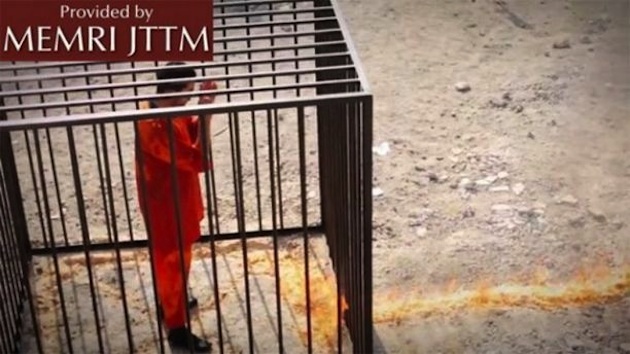 A video of the Jordanian pilot being burned alive is reportedly a month old. (Image: Video)

Jordan executed two al Qaeda prisoners early Wednesday in response to a video released by the ISIS terror group showing a captured Jordanian pilot being burned alive in a cage. Jordan’s government had been negotiating in good faith to secure Lt. Moaz al-Kasasbeh’s release, but according to state television, he was burned alive a month ago.

The release of the grim video has sparked outrage and anti-ISIS demonstrations in Jordan, while Syrian activists reported that the terrorists gleefully played the grisly footage on big-screen televisions in their de facto capital, Raqqa.

Now, a spokesman for the Jordanian government, Mohammed al-Momani, confirmed Jordan had executed Sajida al-Rishawi and Ziad al-Karbouly, two Iraqis with ties to al Qaeda. The executions, which were by hanging, took place at Swaqa prison about 50 miles south of the Jordanian capital of Amman at sunrise. Two ambulances carrying the bodies of al-Rishawi and al-Karbouly drove away from the prison with security escorts.

Jordan agreed to trade al Rishawi for Lt. Muath Al-Kaseasbeh, but put a hold on the trade when ISIS refused to send proof of life. Jordanian TV reported that al-Kaseasbeh was killed as early as Jan. 3, though that could not be immediately confirmed. 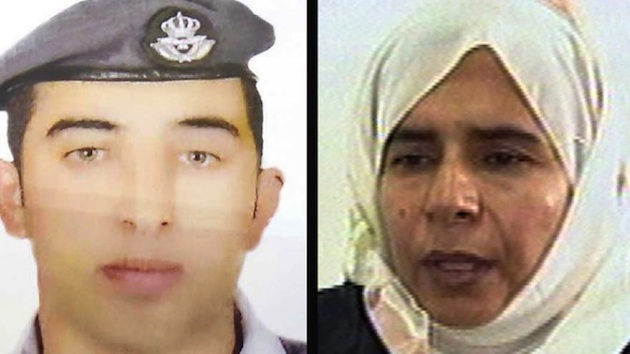 Jordanian pilot Lt. Muath al-Kaseasbeh, left, could be exchanged for Sajida al-Rishawi, right, in a deal that could also free a Japanese journalist held by ISIS. (AP Photo)

Al-Rishawi had been sentenced to death after her 2005 role in a triple hotel bombing that killed 60 people in Amman orchestrated by Al Qaeda in Iraq, the predecessor of the Islamic State group. Al-Karbouly, a former aide to top al Qaeda operative Abu Musab al-Zarqawi, was sent to death row in 2008 for plotting terror attacks on Jordanians in Iraq. Al-Zarqawi was killed in 2006.

In the video, al-Kaseasbeh, showing signs of having been beaten and clad in an orange jumpsuit, speaks under clear duress. A narrator speaking in Arabic blasts Arab nations, including Jordan, for taking part in U.S.-led airstrikes against ISIS. The final five minutes of the video show the caged pilot, his clothing doused in gasoline as the fuel is lit. His screams are audible as he collapses to his knees. After being killed, the burned man and the cage are buried by a bulldozer.

The video ends with ISIS offering “100 golden Dinars” for any Muslims in Jordan who kill other Jordanian pilots, whose names, pictures and hometowns are shown. The video clearly was of high production value, more so than any other previously released ISIS video to date.

President Obama spoke with Jordan’s King Abdullah II in a quickly arranged meeting at the White House. Jordan is a member of the U.S.-led coalition that has been striking ISIS in Syria since this past September.

“It’s just one more indication of the viciousness and barbarity of this organization,” Obama said. “And I think it will redouble the vigilance and determination on the part of the global coalition to make sure that they are degraded and ultimately defeated.”

In a statement before his meeting with Abdullah, Obama vowed the pilot’s death would “redouble the vigilance and determination on the part of our global coalition to make sure they are degraded and ultimately defeated.”

“Lieutenant al-Kaseasbeh’s dedication, courage and service to his country and family represent universal human values that stand in opposition to the cowardice and depravity of ISIL, which has been so broadly rejected around the globe,” Obama said, using another acronym for the terror group.

Rep. Duncan Hunter Jr., R-Ca., said after a meeting with congressional lawmakers and King Abdullah that the Jordanian monarch had been visibly angry and promised swift and certain retaliation against Islamic State group militants.

Hunter added the king also said: “The only problem we’re going to have is running out of fuel and bullets.”

Jordan faces increasing threats from the militants. Jordan borders areas of the group’s self-declared caliphate in Syria and Iraq, while there are have been signs of greater support for the group’s militant ideas among Jordan’s young and poor.

After word spread that the pilot had been killed, dozens of people chanting slogans against the Islamic State group marched toward the royal palace to express their anger. Waving a Jordanian flag, they chanted, “Damn you, Daesh!” — using the Arabic acronym of the group — and “We will avenge, we will avenge our son’s blood.”

Jordanian Army spokesman Mamdouh al-Ameri said the country would strike back hard. “Our punishment and revenge will be as huge as the loss of the Jordanians,” he said.

Protesters marched in the pilot’s home village of Ai and set a local government office on fire. Witnesses said the atmosphere was tense and that riot police patrolled the streets.

The pilot’s father, Safi Yousef al-Kaseasbeh, was attending a tribal meeting in Amman when news of the video surfaced, and he was seen being led from the session. Other men were seen outside, overcome with emotion.

The Islamic State group has released a series of gruesome videos showing the beheading of captives, including two American journalists, an American aid worker and two British aid workers. Tuesday’s was the first to show a captive being burned alive.

Meanwhile, the U.N. Security Council did what they do best; release a statement with no backbone or show of force behind it.

The statement said the U.N. condemns the “brutality of ISIL, which is responsible for thousands of crimes and abuses against people from all faiths, ethnicities and nationalities, and without regard to any basic value of humanity.”