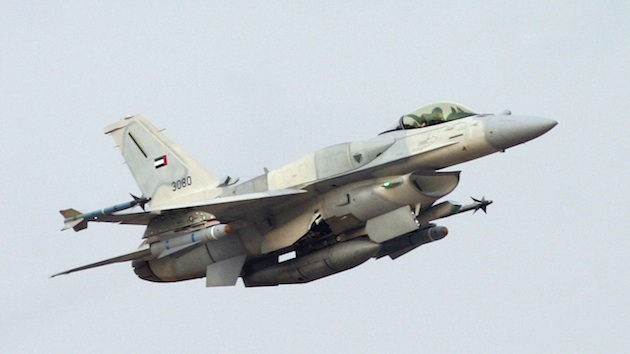 The UAE, a key Arab partner in the U.S.-led coalition against ISIS, quit airstrikes over Syria after the capture of the now-executed Jordanian pilot in December.

The development was a clear setback for the coalition, a fact that wasn’t lost on the Obama administration. In fact, the U.S. military and White House claimed in its daily news releases that the United Arab Emirates (UAE) were still conducting airstrikes.

“Coalition nations conducting airstrikes in Syria include the U.S., Bahrain, Jordan, Saudi Arabia and the United Arab Emirates,” the latest updated release stated on Feb. 1, 2015. Yet, White House Press Secretary Josh Earnest also said Wednesday that the administration wasn’t misleading media and the American people, nor should either be concerned that the coalition is weakened in any way.

“I don’t think people should take away from that announcement that the commitment from the Emiratis and other Arab countries in the region to this broader coalition has waned in any way,” Earnest said. “There’s a very important role for the Emiratis to play in terms of the range of other aspects of our counter-ISIL strategy that requires broad international support.”

But coalition nations conducting humanitarian missions will not “degrade and ultimately destroy” ISIS, and do much to undermine whatever opportunity the Obama administration had to seize on Jordan’s pledge to ramp up airstrikes and military operations against the Islamic terror army. The Obama administration, though, is facing mounting pressure to move more quickly to provide military equipment to Jordan to help the country respond to public opinion in the wake of the execution Lt. Moaz al-Kasasbeh.

“In the short term, he needs help. He intends to push back against ISIS, but he needs more fuel. He needs more bombs. He needs more equipment,” said Rep. Mac Thornberry, R-Texas, chairman of the House Armed Services Committee.

The pressure is bipartisan, as Republicans and Democrats both pressured the Obama administration on Wednesday to not do what they typically do — procrastinate. Lawmakers urged Obama to move quickly to provide Jordan various military systems and support.

All 26 members of the Senate Armed Services Committee sent in a letter to Secretary of State John Kerry and Defense Secretary Chuck Hagel, which stated the situation Jordan and coalition now faces “demands that we move with speed to ensure they receive the military materiel they require.”

“Specifically, Jordan is seeking to obtain aircraft parts, additional night vision equipment and precision munitions that the king feels he needs to secure his border and robustly execute combat air missions into Syria,” wrote the committee, the members of which all met with the king.

The letter stated that King Abdullah expressed his appreciation for the U.S. aid his country has received in the past, but “we were concerned to hear from the king that Jordan is experiencing complications and delays in obtaining certain types of military equipment through our foreign military sales system.”

They firmly requested a Feb. 13 deadline to brief congressional staff on the status of the aid.

Meanwhile, Earnest said the administration would consider any foreign aid package passed by Congress, but indicated the White House would rather consider a specific request from the Jordanian government.

According to sources, the UAE made the decision to stop flying missions because the U.S. did not have enough search-and-rescue assets positioned close enough to the theater of operation, and fact General Thomas G. McInerney has confirmed. But while the UAE claims they were concerned about the ability to assist with downed planes, others say the reason might have more to do with domestic public opinion in the UAE.

White House Press Secretary Josh Earnest also said Wednesday that the Defense Department maintains that an “intensive airborne search was immediately initiated” after the Jordanian pilot was shot down.

“The simple fact of the matter is that we were not in a position to locate the pilot before he was picked up by ISIL forces,” Earnest said.