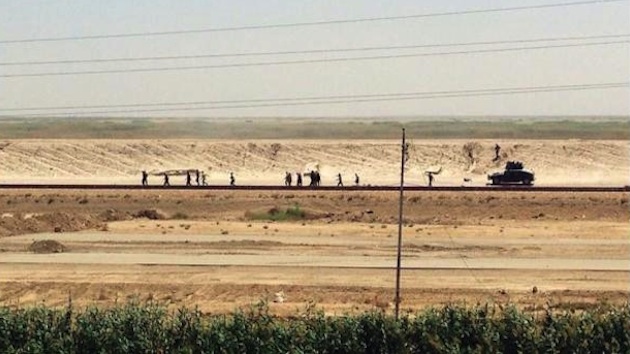 Iraq security forces withdraw from Ramadi, the capital of Iraq’s Anbar province, 115 kilometers (70 miles) west of Baghdad, Sunday, May 17, 2015. Suicide car bomb attacks killed over 10 members of Iraqi security forces Sunday in Ramadi, which now is largely held by the Islamic State group, authorities said. Last week, the militants swept through Ramadi, seizing the main government headquarters and other key parts of the city. It marked a major setback for the Iraqi government’s efforts to drive the militants out of areas they seized last year. (Photo: AP)

BAGHDAD — Islamic State (ISIS) militants have captured the city of Ramadi, killing some 500 civilians and soldiers and forcing 8,000 to flee from their homes, according to an official. The government-backed Shiite militias vowed to mount a counter-offensive and reclaim the Anbar provincial capital, which is located approximately 70 miles from the Iraqi capital of Baghdad.

“Ramadi has fallen,” Muhannad Haimour, a spokesman for the provincial governor of Anbar, told AP Sunday. “The city was completely taken. … The military is fleeing.”

The ISIS victory that resulted in a complete takeover of the city followed a three-day siege that began with a wave of car bombs, including four simultaneous bombings on Sunday that targeted police officers defending the Malaab district in southern Ramadi. The attack killed at least 10 policemen and wounded 15. Among the dead was Col. Muthana al-Jabri, the chief of the Malaab police station. Another three suicide bombers drove their explosive-laden cars into the gate of the military headquarters for the province, killing at least five soldiers and wounding 12, the officials said.

“We do not have an accurate count yet,” said an Anbar spokesman, Muhannad Haimour. “We estimate that 500 people have been killed, both civilians and military, and approximately 8,000 have fled the city.”

The U.S.-led coalition Sunday touted the fact it had conducted seven airstrikes in Ramadi in the last 24 hours, a military effort most analyst consider to be insufficient to turn back ISIS gains.

“It is a fluid and contested battlefield,” Pentagon spokesman Army Col. Steve Warren said. “We are supporting (the Iraqis) with air power.”

Speaking in South Korea, Secretary of State John Kerry tried to downplay what are clearly disastrous developments, calling Ramadi a “target of opportunity” for extremists. Kerry also said he was confident that ISIS’ gains could be reversed in the coming days, but history doesn’t back up that sentiment.