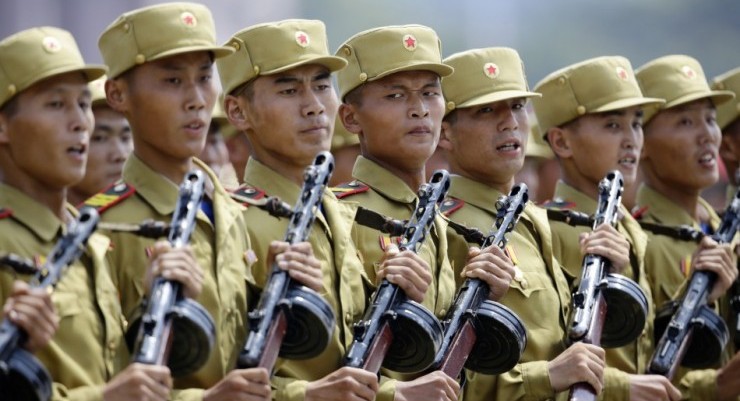 North Korean soldiers parade to mark the 60th anniversary of the signing of a truce in the 1950-1953 Korean War at Kim Il-sung Square, in Pyongyang. (Photo: Reuters)

An official from South Korea’s Ministry of National Defense told the Yonhap News Agency on condition of anonymity that the soldier crossed the border near the town of Hwacheon in central Gangwon Province, which is located northeast of Seoul. The official said the defector was under investigation, but did not give the man’s name or elaborate on a motive for his crossing over.

“A North Korean man presumed to be a serviceperson defected to our side earlier this morning,” the official said. “He crossed the border in Hwacheon, Gangwon Province, on foot, and expressed his will to defect.”

It is unclear how the North Korean soldier, who is reportedly in his teens, crossed the DMZ by presenting himself at a South Korean guard post. An official told the Associated Press that the soldier told the defense ministry that he was beaten regularly and had grievances about the North Korean regime.

Though there have been thousands of defections to the South, the last North Korean soldier to defect by directly crossing the DMZ did so in 2012. He scaled three barbed-wire fences and knocked on the first door of the first South Korean barracks he stumbled upon, an embarrassment to the Southern country, which should be far more secure considering their circumstances.

Most North Korean soldiers and citizens who attempt to leave the communist country try to cross the border with China. From the North Korean ally’s territory, they attempt to arrange travel to South Korea via other Southeast Asian nations.

Yonhap had reported Sunday that North Korean soldiers were planting anti-personnel mines on their side of the DMZ in an effort to discourage their comrades from defecting. The agency reported that patrols of approximately 20 soldiers were gathering military intelligence and restoring signposts marking the DMZ.