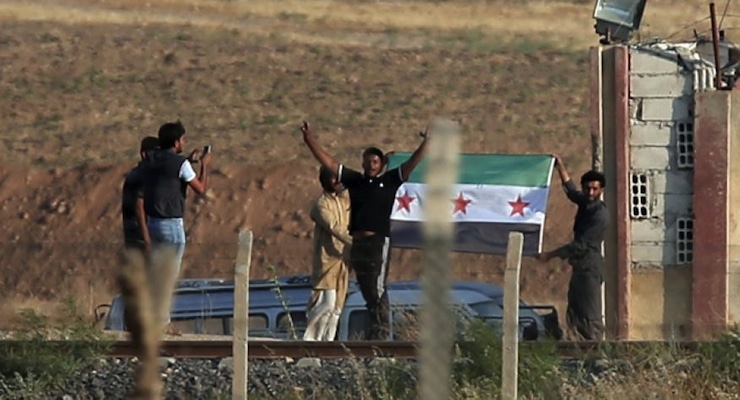 June 15, 2015: In this photo taken from the Turkish side of the border between Turkey and Syria, in Akcakale, southeastern Turkey, Kurdish people wave a Free Syria Army group flag in the outskirts of Tal Abyad, Syria. (AP Photo/Lefteris Pitarakis)

Kurdish fighters took control of a strategic town on the Syria-Turkey border Monday evening and cut off a key supply line to the caliphate’s capital. The defeat at Tal Abyad, which is located roughly 50 miles north of ISIS’ self-declared capital of Raqqa, is the Islamic terror army’s biggest loss since the Kurds retook control of the border town of Kobani near Turkey.

The Washington Post reported that the Kurds, known as the YPG, backed by allied Syrian rebels, captured the town of Tal Abyad, and claimed control of the town center by nightfall Monday. A contingent of the Free Syrian Army is fighting with the Kurds in an alliance against ISIS, which is called “Burkan al-Furat,” or Volcano of the Euphrates.

The Post also reported that the advancing forces had cut off ISIS’ escape route from the town, surrounding it from the east, south, and west. Further, officials from the Britain-based Syrian Observatory for Human Rights confirmed to PPD that Kurdish fighters have nearly taken “full control” of Tal Abyad and command of the border crossing with Turkey.

The Kurdish victory deprives ISIS of a direct route for bringing in foreign militants and supplies, and links the Kurds’ two fronts, putting even more pressure on Raqqa. Now, according to sources, the Islamic State are hunkering down in the city in preparation for defense, setting up checkpoints along key locations around the city’s limits.

While the U.S. backs the YPG, a group of moderate, mostly secular Kurdish militiamen long-driven by a desire for autonomy, the administration has stalled deliveries of arms and other badly needed supplies. Still, since the beginning of the year, they have retaken some 500 Kurdish and Christian towns in northeastern Syria, as well as the strategic border town of Kobani and mountains seized earlier by the Islamic State.

Yet, the Kurdish efforts has increased tensions with Turkmen and Arabs, who blame them for the displacement of more than 16,000 people who fled to Turkey in the past two weeks. On Monday, more than a dozen Syrian rebel groups accused the Kurdish fighters of deliberately displacing thousands of Arabs and Turkmen from Tal Abyad, accusing the YPG of committing acts of “ethnic cleansing.”

“YPG forces … have implemented a new sectarian and ethnic cleansing campaign against Sunni Arabs and Turkmen under the cover of coalition airstrikes which have contributed bombardment, terrorizing civilians and forcing them to flee their villages,” the statement issued by rebel and militant groups said.

Of course, the Kurds and their FSA allies have vehemently denied these charges, and PPD has not been able to confirm them with human rights groups or public officials.

“We say to residents of Tal Abyad, there is no reason for you to cross to another country (Turkey). Our towns are open to you, you are our people and you will return to your towns, villages and properties,” Khalil, the YPG spokesman said.

He also vowed to leave the business of governance in Tal Abyad to the locals once it is completely secure. Khalil said the Kurdish fighters will pack up and leave the town when they are no longer needed.