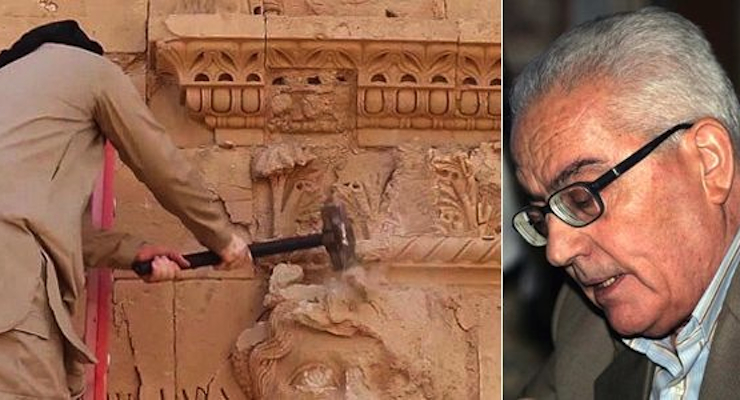 Syrian officials are reported that Khaled Asaad, an 82-year-old archaeologist who had been in charge of overseeing the ancient site at Palmyra, has been beheaded by the Islamic State (ISIS). (Photos: REUTERS/AP)

Syrian officials are reporting that Khaled Asaad, an 82-year-old archaeologist in charge of overseeing the ancient site at Palmyra, was beheaded by ISIS militants. Antiquities chief Maamoun Abdulkarim told Reuters that the family of Khaled Asaad had been informed that Asaad he been beheaded earlier in the day, and that his body was hanging from a column in the town’s main square.

Asaad’s death was also reported by the Britain-based Syrian Observatory for Human Rights, which has a vast network of activists on the ground in Syria reporting to PPD on other outlets. The groups said dozens of people gathered to witness the killing.

“Just imagine that such a scholar who gave such memorable services to the place and to history would be beheaded … and his corpse still hanging from one of the ancient columns in the center of a square in Palmyra,” Abdulkarim said. “The continued presence of these criminals in this city is a curse and bad omen on (Palmyra) and every column and every archaeological piece in it.”

Abdulkarim also said that Asaad had been interrogated by the militant Islamist terror group for over a month before his beheading. ISIS was reportedly seeking information about where the town’s archaeological and intrinsic treasures, which had been hidden in order to protect them ISIS. In the days and weeks before the city fell, Syrian officials said they had moved hundreds of statues out of concern that they would be destroyed by ISIS fighters.

Officials say the scholar did not break, and the ISIS barbarians got nothing out of him.

Asaad spent the better part of his life–over 50 years working–at the UNESCO World Heritage site, which attracted thousands of tourists each year seeking to gaze on the Roman-era ruins. He worked alongside U.S., French, German, and Swiss archaeologists on dozens of missions, as well as authored many books and scientific texts either individually or in cooperation with other Syrian or foreign archeologists, SANA said, including “The Palmyra Sculptures,” and “Zenobia, the Queen of Palmyra and the Orient.”

Abdulkarim described Asaad, who attended the University of Damascus, as “one of the most important pioneers in Syrian archaeology in the 20th century.” The country’s official news agency SANA reported that Asaad–who discovered several ancient cemeteries, caves and the Byzantine cemetery in the garden of the Museum of Palmyra–had been in charge of Palmyra’s archaeological site for four decades until 2003, when he retired. After retiring, al-Asaad worked as an expert with the Antiquities and Museums Department..

“Al-Asaad was a treasure for Syria and the world,” Khalil Hariri from Palmyra’s archaeological department told The Associated Press, speaking over the phone from the central Syrian city of Homs. “Why did they kill him?”

“Their systematic campaign seeks to take us back into pre-history,” he added. “But they will not succeed.”

ISIS drew international condemnation after it released videos showing members destroying artifacts in with hammers and drills in a museum in the northern Iraqi city of Mosul and using explosives to wreck other sites. In March, ISIS members in Iraq razed 3,000-year old Nimrod and bulldozed 2,000-year old Hatra — both of which were UNESCO world heritage sites.

However, at this point, we do not know what ISIS has done or will do with Palmyra’s Roman-era ruins. In early July, the group released a video showing a child execute 25 government soldiers at a Roman amphitheater in Palmyra. In June, ISIS blew up two shrines that did not date from Roman times, but were regarded by the militants as pagan and sacrilegious under their strict interpretation of Islam.