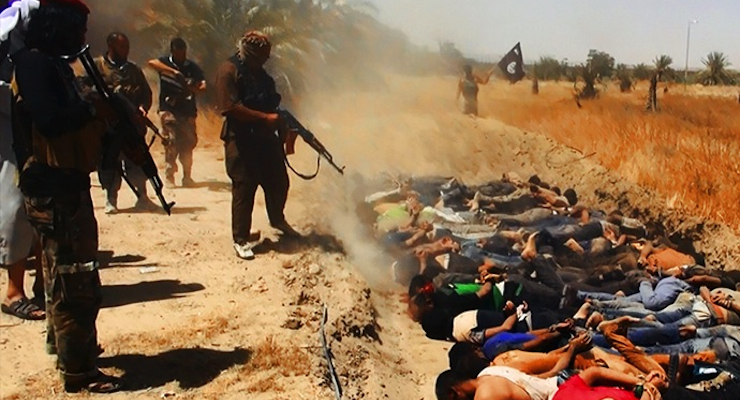 A 12-year old Christian boy was among 12 people executed by the Islamic State (ISIS) during a horrific event that took place on August 28 outside Aleppo, Syria. The young Christian boy was later crucified alongside his father, a Syrian ministry team leader reportedly responsible for starting up 9 churches in the area. They , as well as ten others, were executed for refusing to renounce the name of Jesus Christ and embrace Islam, according to multiple reports.

“In front of the team leader and relatives in the crowd, the Islamic extremists cut off the fingertips of the boy and severely beat him, telling his father they would stop the torture only if he, the father, returned to Islam,” said Christian Aid Mission, a humanitarian group which assists indigenous Christian workers in their native countries. “When the team leader refused, relatives said, the ISIS militants also tortured and beat him and the two other ministry workers. The three men and the boy then met their deaths in crucifixion.”

Eight aid workers, including two women ages 29 and 33, were taken to a separate site in the village and asked to renounced Jesus Christ and convert to Islam. When they refused, they were raped before a gathered crowd and beheaded. Witnesses say the women were faithful to the very end, praying as they knelt in acceptance of their fate before the Islamist militants.

The execution is just one of the latest acts in a greater Christian genocide occurring right now in the Middle East. According to the Gospel Herald, in Syria alone, the Christian population has plunged by nearly two-thirds since the country’s civil war started in 2011. In 2003, after the U.S. invasion of Iraq, the Christian population was around 1.5 million. Since the U.S. abandoned its presence and the Islamic State was able to cut out large swathes of territory in both countries, the number of Christians in country has plummetted to well below 200,000.

“It is like going back 1,000 years seeing the barbarity that Christians are having to live under. I think we are dealing with a group which makes Nazism pale in comparison and I think they have lost all respect for human life,” said Patrick Sookhdeo, the founder of Barnabas Fund, a charity that provides aide to Syrian Christians. “Crucifying these people is sending a message and they are using forms of killing which they believe have been sanctioned by Sharia law.”

“For them what they are doing is perfectly normal and they don’t see a problem with it. It is that religious justification which is so appalling.”

Russia Violates INF Treaty and Turkish Airspace, But Neither US Nor UN Take Action