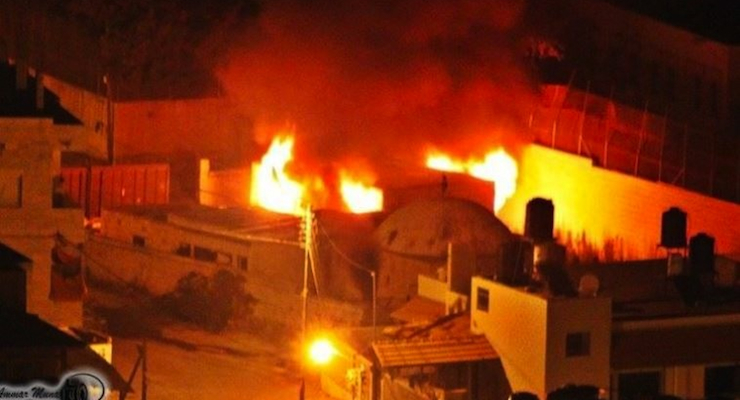 Palestinian rioters early Friday have set fire to the tomb of the Biblical patriarch Joseph in the West Bank city of Nablus, a site revered by Jews and Christians. The developments comes as Hamas calls for a day of rage and ahead of an emergency United Nations Security Council session to discuss the ongoing violence in the Middle East powder keg.

According to the Jerusalem Post, there were no injuries in the fire, but the tomb suffered severe damage.

The IDF said in a statement it intends to repair the site for worshippers to enter, according to JPost. The military also said it is treating the matter with the “utmost severity” and will work to identify the arsonists. The fire was condemned harshly by Israeli politicians, with Avigdor Lieberman, a former foreign minister under Benjamin Netanyahu.

“This arson shows that the Palestinian Authority’s occupation is no different than that of Islamic State,” said Yisrael Beytenu, the chairman of Avigdor Liberman. He said that Palestinians are being incited by the lies of Palestinian Authority President Mahmoud Abbas, murdering innocent Israelis with machetes and knives “and now burning holy and historical sites, just like Islamic State is doing in Iraq and Syria.”

Tensions have been high in the region and at the point of combustion on the streets of Jerusalem, following a series of recent Palestinian attacks, most of them stabbings, that killed eight Israelis. In retaliation, 31 Palestinians have been reported killed by Israeli fire, including 14 labeled by Israel as attackers. The others have been killed in clashes with Israeli troops.

The U.N. Security Council meeting will be held at the request of Jordan, the only council member from the Arab Group, which includes the Palestinian Authority. Arab ambassadors held a strategy session at the U.N. Wednesday. The talks included a possible draft resolution demanding that Israeli security forces withdraw and the consideration of deploying a U.N. protection force.

Netanyahu spoke a one day after Abbas delivered a speech claiming that Israel had killed Ahmed Manasra, 13. However, the young Palestinian teenager, along with his 15-year old cousin, had stabbed a 13-year old Israeli in Jerusalem’s Pisgat Ze’ev neighborhood on Tuesday. Abbas, who formed a coaltion government controlled by Hamas’ political wing, ignited a Palestinian uproar in Israel after he falsely claimed in a televised speech that Israelis had “summarily executed” Manasra.

“First of all he (Manasra) is not dead, he is alive. Second, he is not innocent. He tried to kill, murder–knife to death an innocent Israel youngster, 13 years old, riding his bike,” said Netanyahu. “Now we have a new big lie. That new big lie is that Israel is executing Palestinians.”

Palestinians were further enraged by a video circulating that appeared to show Ahmed lying in the street with his head bloodied, as bystanders curse him and shout “Die!” in Hebrew. The images, which widely circulated on social media, conveniently made no mention of the preceding attack by Ahmed and his cousin Hassan.

Israel has increased security across the country in response to the unrest. On Thursday, the military said it would deploy 300 soldiers in Jerusalem to help police maintain order, guard public transportation and the city’s main streets.