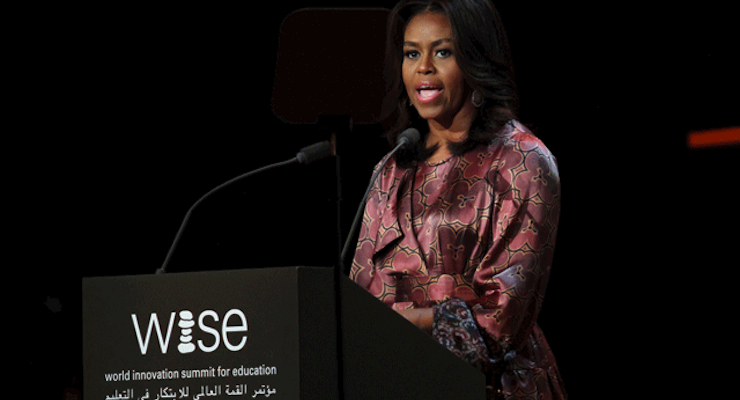 First Lady Michelle Obama gave a speech on women’s rights at the World Innovation Summit for Education in Qatar this week, asserting that “solving our girls’ education crisis” is “also about attitudes and beliefs.”

Unfortunately, the “attitudes and beliefs” held by the Qatar Foundation, a group known for repeatedly hosting radical clerics, have been well-documented. For example, Omar Abdelkafi, who recently mocked the killings of French satirical writers at Charlie Hebdo and called the terrorist attack in Paris “the sequel to the comedy film of 9/11,” spoke at the QF’s mosque. Another esteemed speaker said that “Jews and their helpers must be destroyed.”

In April, the foundation’s Twitter feed touted another appearance by Abdelkafi, who also once stated that “Muslims should not shake hands with Christians, or wish them well on Christian holidays, or walk on the same sidewalk with them.” The feed has openly promoted Salman al Alodah, who has has accused Jews of using “human blood” in their religious ceremonies, hosted Abdulaziz al-Fawzan, a Saudi preacher who called on Muslims to “hate” Christians.

Ryan Mauro, a national security analyst and adjunct professor at the Clarion Project, called the Qatar Foundation “an ideological factory for terrorism, anti-Semitism, Hamas and the Muslim Brotherhood.”

“A reasonable argument can be made for using Islamist platforms to confront their own extremism, but that requires holding them accountable,” Mauro said. “First Lady Obama is right to call for a sweeping changes in the Muslim world for women’s rights, but we must avoid positioning the so-called “moderate” Islamists as the spearhead of that movement.”

Mauro noted that the Qatar Foundation’s Faculty of Islamic Studies has a think tank that is named the Al-Qaradawi Center for Islamic Moderation and Renewal, which bears the name of the spiritual leader of the Muslim Brotherhood and most influential advocates of Hamas, suicide bombing and other acts of terrorism. “His Eminence” Dr. Yusuf al Qaradawi, as the faculty site refers to him, said the Holocaust was Allah‘s punishment of the Jews and that he hopes that Allah uses Muslim hands for the next judgment.

“Qaradawi is the leader of a network of terrorism-linked charities called the Union of Good,” Mauro added. “The charities have been sanctioned by the U.S. Treasury Department because they were ‘created by Hamas leadership to transfer funds to the terrorist organization.'”

The Qatari government, which the Obama administration continues to see as a “moderate” partner against Islamic extremism, has been the target of significant bipartisan criticism from Capitol Hill lawmakers for their role in funding terrorist groups such as Hamas. Yet, Qatar remains a top U.S. ally and is sold billions of dollars worth of American arms.

The White House declined to comment for this article.