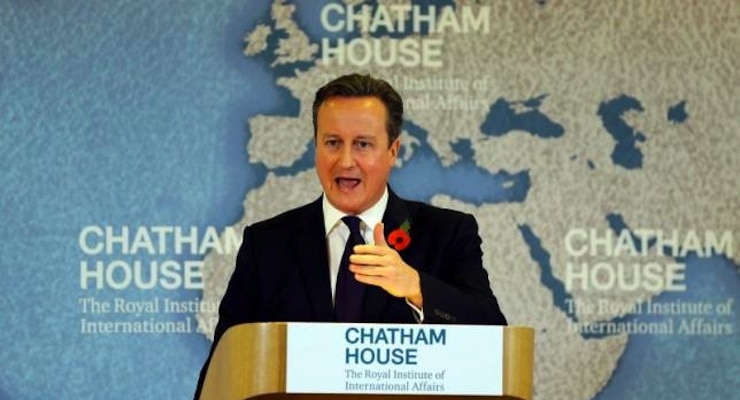 Britain’s Prime Minister David Cameron delivers a speech on EU reform, at Chatham House in London, Britain November 10, 2015. Cameron said he hoped to make good progress with reforms of the European Union when leaders from the bloc meet next month, but he gave no fresh sign of when he plans to hold Britain’s EU membership referendum. (Photo: Reuters/Kirsty Wigglesworth)

British Prime Minister David Cameron responded to nay-sayers and doubters at home and in other EU nations on Tuesday regarding his attempt to reform the 28-member bloc. Cameron said his demands should be taken as a chance to increase prosperity rather than “Mission Impossible.”

“There will be those who say, here and elsewhere in the EU, that we are embarked on ‘Mission Impossible’,” Cameron told diplomats, reporters and business leaders at the Chatham House think tank in London. “I do not believe so for a minute. The European Union has a record of solving intractable problems. It can solve this one too. Let us therefore resolve to do so, because the prize is a big one.”

Cameron, who is moving to increase his nation’s sovereignty amid a growing migrant crisis from the Middle East, laid out his plan in an hourlong speech that covered safeguards against economic discrimination, increased power for national parliaments in EU decision-making, being released from the commitment to pursue “ever closer union,” and the right to restrict benefits for migrants from other EU countries for four years. Cameron also sent a detailed letter to Donald Tusk, the president of the European Council.

Acknowledgement of receipt. With @David_Cameron's letter, negotiations on #UKinEU can now begin

However, critics claim what Cameron is asking will be almost impossible because completing treaty change in two years would mean several EU states holding referendums, which more leftwing governments fear would result in them losing to the politics of Eurosceptics. For instance, support for Angela Merkel, who has opened Germany to a million migrants, is plummeting. Bavaria’s CSU, sister party of Merkel’s CDU, is in full rebellion.

“A modern day mass migration is taking place … that could change the face of Europe’s civilization,” Hungarian President Viktor Orban recently warned. “If that happens, that is irreversible. There is no way back from a multicultural Europe. If we make a mistake now, it will be forever.”

Meanwhile, Cameron proposed that people coming to Britain from the EU must live in the country for four years before qualifying for in work benefits or social housing, and that the policy of allowing them to send child benefits overseas must stop. The latter demand could cause the most difficulty in the renegotiation, as EU members, particularly in eastern Europe from where hundreds of thousands of people have left for Britain, will cry discrimination.

But Cameron said none of his demands were “outlandish or absurd,” but rather mainstream concerns from Eurosceptics, including some in his Conservative Party.

“I must be very, very clear. I don’t want this reasonable approach to be misunderstood. Reasonable does not mean lacking in resolve,” he said. “I understand, of course that every negotiation must involve just that – negotiation. But Britain is the second biggest economy in the EU. We are the second biggest contributor to the EU budget. Along with France, we are its foremost military power. We gain from the Union, but we bring a lot to it.”

In other words, the prime minister is finally taking a position that many British people have been supporting–you need us more than we need you–a sentiment behind the UK Independence Party growing in popularity.

While opinion polls say the British people will vote to stay in the European Union, the spread has narrowed between the “Yes” and “No” in the wake of the recent mass migration from the Middle East. Further, the same opinion polls thought Cameron’s Creelection effort would be difficult, but it wasn’t. Cameron and the Conservative Party won in a landslide.