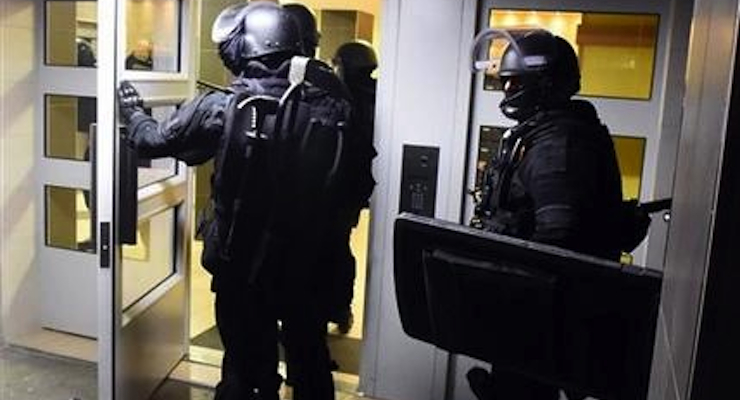 Anti terrorism police officers enter a building during a raid in the Mirail district in Toulouse, southwestern France, Monday, Nov. 16, 2015. France’s Prime Minister Manuel Valls says there have been over 150 police raids overnight in the country. (AP Photo) FRANCE OUT

UPDATED: Officials have made a number of arrests in connection with a series of terrorist attacks in Paris Friday after having conducted over 150 raids in France and Belgium. As of Monday afternoon, officials say at least 24 people had been arrested and, contrary to earlier reports, Salah Abdeslam, 26, a key suspect, has not yet been apprehended.

Officials told PPD Abdeslam was stopped by officers at the border in the hours following the attacks, but let him go. His brother, Mohammed Abdeslam, was arrested in a sting operation as he returned to Belgium from Paris. While PPD can confirm Mohammed’s arrest, Salah’s arrest has not yet been independently verified.

French Prime Minister Manuel Valls said Monday “we are at war” against a “terrorist army,” not a single cell or group.

“We know that operations were being prepared and are still being prepared, not only against France but other European countries too,” Valls said. “We are making use of the legal framework of the state of emergency to question people who are part of the radical jihadist movement… And all those who advocate hate of the republic.”

Belgium’s Premier Charles Michel said the Belgian authorities would crack down on Molenbeek, a location known to be at the center of a longtime weapons trafficking operation and jihadist haven.

Meanwhile, PPD confirmed on Saturday that at least one terrorist in the Paris attacks Friday entered the European Union (EU) through a popular transit point for so-called Syrian refugees.

European security officials have long and quietly feared that Islamic jihadists could take advantage of the mass migration influx, while opposition from native populations across Europe continues to rise. Support for Angela Merkel, who has opened Germany to a million migrants, is completely plummeting. Bavaria’s CSU, sister party of Merkel’s CDU, is in full rebellion. Bavaria, along with Leros, has been a main port of entry for the hundreds of thousands of arriving migrants.

“It is clear now that together with the victims of Islamo-fascism in the Middle East that come as refugees, extreme elements are crossing to Europe,” Defence Minister Panos Kammenos said after an emergency meeting with Prime Minister Alexis Tsipras.

Over 800,000 people have crossed the Mediterranean to Europe this year, alone. Yet, Tsipras on Saturday sought to downplay the danger, insisting that the refugees fleeing Syria “are hunted by the same terrorists” that were behind the Paris attacks on Friday.

“We must find solutions to the drama of the people who leave their homes, hunted by the same terrorists, and drown in the Mediterranean,” Tsipras said in a televised address.