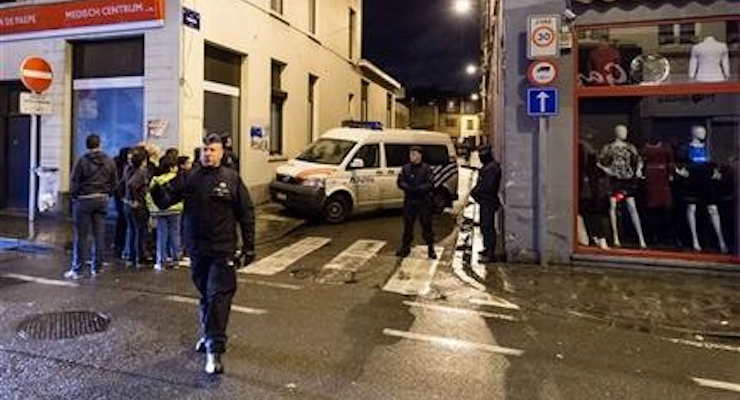 FILE – In this Tuesday, Nov. 17, 2015, file photo, police guard a street in which special intervention forces searched a house in the Molenbeek neighborhood in Brussels. Molenbeek is separated from the Midi section of Brussels by part of a mosaic of jurisdictions of 19 municipalities and 6 policing zones, all for a population of 1 million, long hampering cooperation. (AP Photo/Geert Vanden Wijngaert, File)

The U.S. Embassy in Belgium issued a “shelter in place” order on Saturday after local authorities raised the threat of an Islamic terrorist attack in the country’s capital is serious and imminent. Americans in Brussels are ordered to remain at home as the national crisis center raised its terrorism alert Saturday to its highest level.

In a statement on its website Saturday the embassy informed Americans that “if you must go out, avoid large crowds.” They also warned U.S. citizens to “exercise caution in public transportation systems, sporting events, residential areas, business offices, shopping malls and other tourist destinations.”

The Belgian police continued to search for a suspect in the Paris attacks that killed 130 people, while Belgian leaders raised the terrorism alert to Level 4, which indicates a “serious and immediate threat.”

“We urge the public not to give in to panic, to stay calm,” Prime Minister Charles Michel said. “We have taken the measures that are necessary.”

The prime minister, speaking at a news conference after the emergency government meeting, said the decision to raise the alert level was taken “based on quite precise information about the risk of an attack like the one that happened in Paris…where several individuals with arms and explosives launch actions, perhaps even in several places at the same time.”