HomeNewsWorldIraqi Flag Flies in Center of Ramadi, But ISIS Remains in Suburban Strongholds

Iraqi Flag Flies in Center of Ramadi, But ISIS Remains in Suburban Strongholds 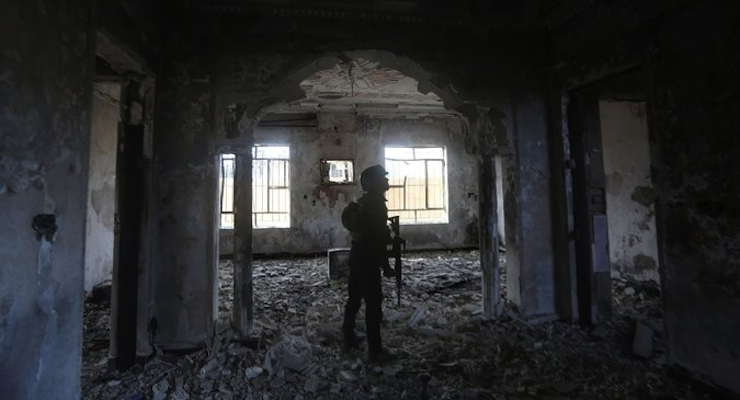 A soldier in a heavily damaged building in the Huz neighborhood of Ramadi, Iraq, on Sunday. (Photo: Ahmad Al-Rubaye/Agence France-Presse/Getty Images)

Shiite Iraqi security forces, backed by Sunni tribal fighters and U.S.-coalition airstrikes, have retaking a key government compound from the Islamic State in Ramadi. The Iraqi flag flew in the center of the city on Monday for the first time since ISIS took the city in the May of 2015.

“The clearance of the government center is a significant accomplishment and is the result of many months of hard work by the Iraqi Army, the Counterterrorism Service, the Iraqi Air Force, local and federal police, and tribal fighters,” Col. Steven H. Warren, the United States military spokesman in Baghdad, said in a statement. “Today’s success is a proud moment for Iraq.”

Retaking control over Ramadi is significant because it would enable Iraq to cut Islamic State supply lines to Falluja, making it extremely difficult for the terror army to continue to hold that city. Not surprisingly, U.S. coalition forces ramped up their airstrikes over the weekend by targeting 18 positions on Sunday, alone. Colonel Warren, the United States military spokesman in Baghdad, told The New York Times the Iraqi forces on the ground had been “supported by over 600 coalition airstrikes since July.”

“The security forces have entered the governmental buildings and raised the Iraqi flags over them after killing many ISIS militants, and the rest have escaped,” said Brig. Gen. Yahya Rasool, a spokesman for the Iraqi military. Rasool also declared the city “fully liberated.”

However, some U.S. Pentagon and Iraqi officials are quietly taking a step back from such claims, waiting for further gains and warning the city is not totally out of ISIS control. Further, once the battle ends, the Shiite-led government in Baghdad will somehow have to put the pieces of a battered city full of distrustful Sunni residents back together. Sunnis are fearful of a majority Shiite army dominated by Iran in the absent of the U.S. As of now, government officials have pledged to hand over security in Ramadi to the Sunni militias in the coming weeks.

Maj. Gen. Ismail al-Mahlawi said that Islamic State fighters are still in control of roughly 30% of the city, while ISIS supporters outright dismissed reports that Ramadi was about to fall on Twitter. There remains reports of heavy fighting in the downtown neighborhood of Huz, as well as in Sajariya and Sufiya, which are located on the eastern outskirts of the city. A battle for Albu Ghanim, located to the north, is also underway. Islamic State fighters captured those villages in April before advancing on the center of Ramadi.

In an email, one official said U.S. forces–despite President Obama recently sending an additional 200–have not participated in combat in Iraq since the raid with peshmerga forces in October near Hawija, which resulted in 70 hostages being freed from ISIS and the death of one American Delta Force soldier. He was the first soldier killed in Iraq since Obama withdrew troops and declared an end to combat operations.