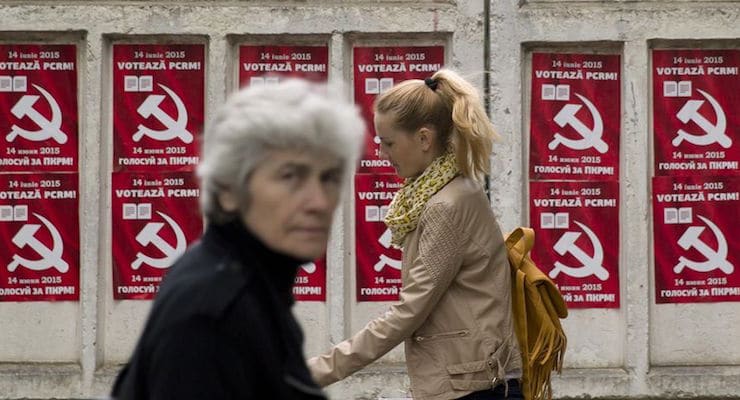 Pedestrians walk past election posters for the Communist Party in Chisinau, the capital city of Moldova. Repeated attempts to sell radioactive materials signal that a thriving nuclear black market has emerged in this impoverished corner of Eastern Europe on the fringes of the former Soviet Union. (AP Photo/Vadim Ghirda)

Most Americans have never heard of Moldova, much less could find it on a map. But what has happened to this small former Soviet republic deserves to be on the front page of our newspapers and taught in our universities.

I have long written and spoken about the threat to our country and the West brought on by our financial irresponsibility. Now we have a real-life example of the way financial warfare can destroy a country. The threat to the United States is growing daily. As our sovereign debt approaches $20 trillion, on its way to $30 trillion, we can no longer afford to ignore this reality and the opening it gives our adversaries.

This week, courtesy of the Heritage Foundation, I spent three hours listening to and interviewing Mihail Gofman, a former Moldovan senior official at the National Anti-Corruption Center (NAC) who is also affiliated with various other Moldovan and European anti-money laundering and corruption watchdogs. Mr. Gofman was fired from his position at the NAC in 2013 after initiating an investigation of a massive theft from the Moldovan financial system, one that has crippled a country that was once on the way to European integration and a brighter future moving away from its corrupt Soviet past.

We haven’t the space here to do justice to the complicated scheme, but the 30,000-foot view is that in order to shore up its capital base, Moldova’s Banca di Economii (BEM) wanted to issue additional shares for a large percentage of the bank. These shares were sold to a syndicate of unscrupulous actors through an extensive network of shell companies. The purchasing funds were actually the assets of BEM itself, obtained through a series of noncommercial and fraudulent loans from the bank.

In short, the equivalent of a $1 billion in Moldovan currency was stolen from BEM and several other smaller entities — an astonishing 20 percent of the assets of the country, driving down the value of the currency and forcing the already struggling Moldovans deeper into poverty and misery.

The shocking truth is that much of this money was injected into Moldova from the IMF and other Western financial institutions; in short, the money was stolen from Western taxpayers. According to Mr. Gofman, over half of this money vanished into Russia, while the rest was squirreled away offshore and disappeared.

The end result is that once-promising Moldova, in Mr. Gofman’s words, has become a bomb waiting to explode.

“There is no precedent for this,” he told me. “They destroyed the country without a shot, created chaos. Russia and the oligarchs want us to remain a gray zone, between the West and Russia, [and] there will be no integration with the EU.”

The political system in Moldova has descended into tribal clan warfare, with each clan loyal to a different oligarch and center of power. Ideology has disappeared, driven out by corruption, graft and anarchy. Government institutions are no longer functioning. The only hope is more money and support from the West.

However, any funds provided will go merely to replacing the capital that was stolen from these banks, not to rebuilding the country for the future. The IMF is being held at bay anyway, with those in power leery of the auditors being allowed to conduct an autopsy of Moldova’s financial system.

Why should Americans care about what happened in Moldova, a tiny country so far away? The point is that by running our debt up to such unsustainably high levels, we have given our adversaries an opening to do serious damage to us financially. The Federal Reserve cannot raise rates in this country because we cannot afford to service our debt at market rates. Financial weakness leads to military weakness.

We are seeing this play itself out in front of our eyes. As Russia, China and Iran work to remove the U.S. dollar from the global financial system, the risk grows that this type of hybrid warfare could cripple our country, especially when combined with cyber attacks, high-tech threats to the electrical grid and other strikes.

The Obama administration has made dangerously weak by doubling the national debt, shrinking the military to scary levels, and destroying American credibility around the globe.

Coup in Turkey: Conflicting Reports on Whether Military Has "Completely Taken Over"