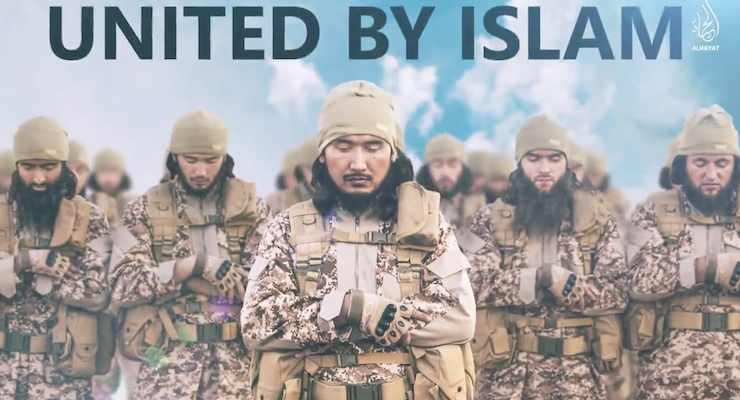 Screenshot from the latest video purportedly released by the Islamic State (ISIS) taunting the U.S.-led coalition.

IRBIL, Iraq – The Islamic State (ISIS) is manufacturing weapons on an industrial scale in and around Mosul with products largely purchased in bulk from Turkey, according to a report published by the London-based Conflict Armaments Research.

The arms research group released their report on Wednesday showing that ISIS maintained a “robust and reliable” supply chain between Turkey and Iraq that gives the militant group a means to mass produce tens of thousands of weapons, CAR said. The group’s researchers studied ISIS weapons found at manufacturing facilities and on the battlefield during the Iraqi operation to retake Mosul that is still currently ongoing.

“Evidence documented by CAR during 29 months of operations along IS frontlines indicates that IS forces have made one-off , bulk-procurements of chemical precursors from single suppliers,” the report stated. “In other cases, production dates spanning a range of years suggest that IS forces have made repeated acquisitions of identical products from the same sources—almost exclusively from the Turkish domestic market.”

However, as U.S.- and Iran-backed Iraqi forces make battlefield gains, ISIS will lose more capacity to manufacture weapons on such a large scale. Still, the the research group’s executive director James Bevan warned that the group will take precautions to ensure their most valuable assets retreat.

“Given that this group is so organized, they clearly see the writing on the wall in Mosul,” Mr. Bevan said. He believes the Islamic State has already done so for highly trained bomb-makers previously located in Mosul. They’ve been moved into Syria and, despite being a NATO allied nation, the southern region of Turkey.

“They place a very high value on technical capacity and they will do everything they can to preserve it,” Mr. Bevan said, adding that ISIS militants turned to Turkey for weapons ingredients because they knew that their demand exceeded supply in Iraq.

Iraqi forces have been met with strong resistance during their efforts to retake Mosul since they began in October, suicide car bombs and logically capable ground forces. Since the offensive was launched, they’ve retaken only less than a quarter of the city, which was once firmly under U.S. control before President Barack Obama withdrew troops.