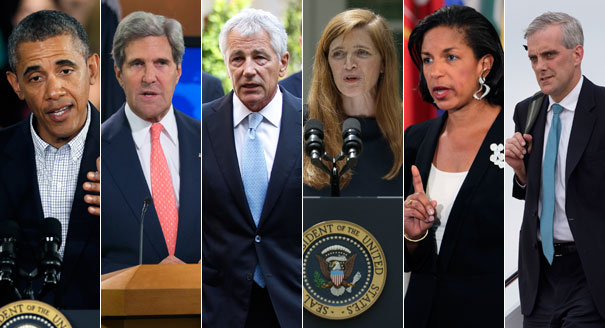 (This is part one of a two-part addition analyzing the causes of the evident failure of the Obama doctrine.)

I have always found it ironic how liberal-progressives are hailed as intellectuals, yet with respect to foreign policy, progressives pursue careless, naive and even downright dangerous doctrines. If there was any confusion remaining in the security studies community, it has now become evident that the failure of the Obama foreign policy doctrine has put the U.S., our allies and the whole world in grave danger.

Admittedly, that sounds like an overblown assessment. But the disconnect between the reality of statecraft and the worldview responsible for the Obama foreign policy doctrine, really is that serious. While liberalism or internationalism is the dominant worldview in the halls of the elitist and disconnected State Department (and the halls of the New York Times and Washington Post for that matter), real events in history and actual empirical evidence used in advanced scholarship to study them, are dominated by realism.

Specifically, let’s look at two areas where the Obama foreign policy doctrine clearly made false presumptions: strategic response to crisis in foreign policy and the international system. In part 1, we will look at strategy, using history and international relations theory to explain the failures of this administration’s foreign policy.

Populated by a cabinet that an adoring media referred to as the “best and the brightest,” the Kennedy administration abandoned the “asymmetrical” approach to responding to crisis in foreign policy under Eisenhower. The approach practiced the policy of “massive retaliation,” a brainchild of Eisenhower’s Secretary of State John Foster Dulles, who believed the U.S. was forced into a conflict with North Korea and China because the communists weren’t convinced that President Truman, who was a the liberal internationalists, would massively retaliate against Moscow or Beijing in response.

He was right. Yet, throughout the Republican Eisenhower administration the U.S. managed to avoid starting another peripheral or great war, because the war-tested Eisenhower made enemies a believable promise that challengers to the U.S.-favored status quo would be bombed back to the stone age.

However, rather than continuing the promise of “massive retaliation” in response to unqualified threats to U.S. interests, the “best and the brightest” instead favored a “symmetrical,” or “proportional” response. In other words, how the U.S. responded in the face of challenges to the status quo was based on the severity of the threat and whether or not it was a vital or secondary U.S. interest. President Carter, though he based his foreign policy uniquely on a human rights platform, also took a symmetrical response, which Reagan reversed with his “peace through strength” doctrine.

Unfortunately, the Obama foreign policy doctrine subscribes to this approach, despite its historical failure, as made evident by Kerry’s use of the words “appropriate” and “proportional” when describing the U.S. response to Russia annexing Crimea.

On paper, in the Ivory Tower, this approach must have looked reasonable, and perhaps it still does to many Americans. But it’s a dangerous and foolish approach to foreign policy.

For starters, liberals who subscribe to “symmetrical” response are never clear — with the American people or themselves — on what defines a “vital” or “secondary” interest. Thus, neither are other nation-states, which makes for a dangerously unstable environment for decision-making actors to have to navigate within. But, because nations are constantly trying to increase their relative power, world leaders will constantly test the U.S. with crisis if they know “massive retaliation” against them is off the table.

For simplicity, we could accurately use the “give an inch and they’ll take a foot” metaphor, which is exactly what happened to Kennedy prior to the Cuban Missile Crisis and Vietnam. In the case of the Cuban Missile Crisis, Kennedy believed the prior plan crafted by Eisenhower was too strong, thus he reduced air support and force levels participating in the coup. The result was the Bay of Pigs. Further, considering Kennedy acquiesced to Nikita Khrushchev on the Berlin Wall, following what was widely viewed to be a weak performance by the young liberal during the June meeting in 1961, the Cuban Missile Crisis was inevitable.

Security scholars certainly differ on the question of U.S. involvement in Vietnam had President Kennedy not been assassinated, but there is a strong consensus that he would have faced the same crisis of credibility that faced President Johnson. Kennedy answered communist expansion into Asia with drips and drabs of troop deployments, an unconvincing strategy that said to enemies that the U.S. was not committed, and led to a massive buildup before and during the Johnson administration.

An ambitious power, if you let them, will take unless another great power or superpower stops them or they believe they have achieved their goal. Those who take a symmetrical approach have in the past — and will always in the future — fall in to the classic “credibility trap,” which is where Obama found himself after his “red line” debacle in Syria and finds himself now in the Ukraine crisis. What President Obama and liberals do not understand about foreign policy is that statecraft is interconnected, and no event in the international system of anarchy is trivial.

Removing the missile defense systems from Poland affected developments in Ukraine and Crimea. Failing to act on a self-imposed “red line” in Syria affected the decision-making of Vladimir Putin, and Obama’s weak response to Crimea will affect the decision-making process of Iranian leaders, who will now no longer be pressured by Russia and free to resume their nuclear program. And behind the scenes, China watches and plot how far they can push the envelope in the South China Sea, already initiating air defense zones that they knew Obama would not challenge.

Strategy is one area that explains the Obama administration’s foreign policy failures, but it is a symptom of a greater problem, which is ideological in nature. Obama and other progressives hold a dangerous worldview, which falsely believes the international system is filled with binding imaginary norms that promote the equality of nations. They naively believe in a community of nations that operate within the boundaries of imaginary, binding international norms, where cooperation trumps security competition.

It is at the heart of this ideology where we find the reason the Obama doctrine has failed, and this failure has truly put the U.S., our allies and the entire world in grave danger.

(Read Part 2: Obama Doctrine Not Only Failed, But Put World At Risk Of Another Great War)

Obama Doctrine Not Only Failed, But Put World At Risk Of Another Great War