HomeOpinionObama Doctrine Not Only Failed, But Put World At Risk Of Another Great War

Obama Doctrine Not Only Failed, But Put World At Risk Of Another Great War 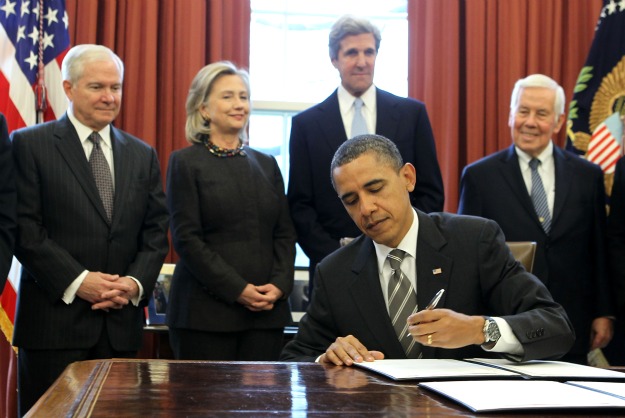 (From left to right) President Obama, Sec. of Defense Bill Gates, then-Sec. of State Hillary Clinton, now-Sec. of State John Kerry and Sen. Richard Lugar, all sit and watch the beginning of the end of the Obama doctrine.

(This is part two of a two-part addition analyzing the causes of the evident failure of the Obama doctrine.)

Given our inner dependence, any world order that elevates one nation or a group of people over another, will inevitably fail. — President Barack Obama speaking in Cairo, Egypt, on June 4, 2009.

In the first article in this series we discussed strategic response to crisis in foreign policy to explain how and why President Obama has found himself in a classic “credibility trap,” constantly and repeatedly tested by Putin and other world leaders. In this article, we will discuss the structure of the international system, and the false presumptions Obama and, progressives, in general, have made about this system.

But before we get started, there are two problems with the statement above, which President Obama made in Cairo, Egypt. Firstly, underscoring the ramifications of electing a little-known, know-it-all president who never sat for a single International Relations 101 or Western Civilization 101 class in the continental U.S., it’s “interdependence,” and not “inner dependence.”

Second, while the progressive worldview regarding the international system has been around for quite some time, never before has it been implemented as a policy, until the presidency of Barack Obama. Now, those who naively believe in a community of nations operating within the boundaries of imaginary, binding international norms, where cooperation trumps security competition, are actually in charge of the one nation whose power has effectively prevented the outbreak of great power conflict.

Unfortunately, the real international system exists in a state of anarchy, not cooperation. Or put another way, there are no global policemen to call if a nation needs to pick up the global phone and call 911. And for reasons we will talk about soon, there will never be one, including the United Nations. Despite claims to the contrary, the U.N. has never been successful at stopping a war since its creation. But before we get into “why” a community of nations will never truly be effective, we must first understand “how” the international system has been structured in the past, and will always be in the future.

There are three “balance of power” scenarios studied in international relations and security studies scholarship, the first of which, progressives like Barack Obama and John Kerry, absolutely hate.

A unipolar system is one in which only one nation has achieved regional hegemony, or a nation that dominates all other states in the regional international system. In applicable history, or the period beginning in the early 19th century when the modern nation-state system emerged, only one power has achieved such a status — the United States of America. Though the 19th century United Kingdom is sometimes referred to as a hegemon, they were not a regional hegemon, because there were four other great powers at the time — Austria, France, Prussia and Russia — and the UK did not have the power to dominate.

A bipolar system, such as the one that existed during the Cold War, is one in which only two great powers have achieved regional hegemony. The two great powers — or, in this case, the U.S. and the Soviet Union (Russia) — dominate other powers in their respective regions and have a capacity to disrupt the global status quo. A bipolar international system was widely thought to be (and still is for many scholars) the most stable balance of power structure, or has the least tendency to lead to great war.

The final and, perhaps, most studied scenario is what we refer to as a multipolar system. While we could break this power structure down to a more specific tripolar or quadpolar system, for instance, the resulting empirical data would not vary. Sadly, this is the preferred system of the American left, and the so-called “progressive” worldview underscored in President Obama’s speech in Cairo, Egypt.

They believe not in U.S. primacy, but in a more social-democratic nation, resembling the former great and now-weak powers of Europe. They see the United States as a bully, and if only the U.S. would stop provoking other nations and be more cooperative, then a less powerful America could peacefully exist in a community of other social-democracies. Unfortunately, they make two problematic presumptions, neither of which are true and both are dangerous.

While it is correct that those who favor unipolar and bipolar systems have both made compelling arguments for why each is the most stable power structure — meaning, they are the least likely to lead to war — no serious scholar argues in favor of multipolarity. Sure, the only unipolar system the world has ever known began with the Gulf War, and the Cold War Era was riddled with small peripheral wars, i.e. Korea, Vietnam, and the Soviet invasion of Afghanistan. However, neither has the proven instability — or, propensity for great war as seen in a multipolar system — which led to catastrophic conflict during the Napoleonic Wars, World War I and World War II.

Multipolarity, as a means to peace through a community of nations, is impossible. When we examine the historical record, then we find that nationalism has always and will always trump ideology and cooperation. Kenneth Waltz, in his seminal book Man, the State, and War, explains how nationalism prevailed over ideology during the 20th century. The entire socialist theory holding that capitalism is the cause of great war, therefore eradicating capitalism will lead to peace, was completely demolished.

And the same logic is applicable to the democratic peace theory, or the claim that democracies do not go to war with each other. This is equally untrue, as John Mearsheimer unequivocally shows in The Tragedy of Great Power Politics, and in only one relatively short chapter, no less. This theory, most notably put forward by Bruce Russett in Grasping the Democratic Peace, must rely upon cherry-picking data and obfuscation over what constitutes a true democracy or an actual war.

Titans of international relations theory, such as John Mearsheimer (offensive realism) and Kenneth Waltz (defensive realism), debate why nations seek to increase their relative power, not whether or not they do. The naive and ignorant foreign policy of the Obama administration dangerously refuses to acknowledge this fact, and if history and empirical evidence tell us anything, the Obama doctrine has not only failed, but put the world at risk of another great war. In fact, there is a good deal of evidence to argue, as Dale C. Copeland argued in The Origins of Major War, that a declining U.S. is likely to lead to a challenge by another great power, such as Russia or China.

This is the simple nature of the international system of anarchy nation-states and state actors exists within. And in this natural state of anarchy, American primacy was the only truly stabilizing power, despite the feeble existence of the United Nations and the European Union.

The Elevation Of The Mediocre Lena Dunham Is Only The Beginning