HomeOpinionBetween Iraq And A Hard Place 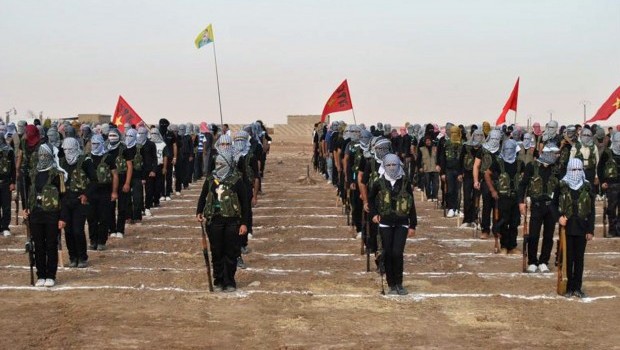 Members of the Islamic State of Iraq and Syria. (Photo: AP)

Iraq and most of the Middle East is now lost to Islamic extremism.

This is because the U.S. and the world have neglected to do what was necessary in a failed bid to avoid a major conflict on the scale of WWII. Both aggressive intervention and the subsequent appeasement have failed. Once the world wakes up to the fact that we are facing a threat on the order of Nazism, that now may be nuclear armed, it might be saved. Anti-semitic, hostile and extreme in their application of justice, Islamic fundamentalism represents a very great threat to American freedoms and its way of life.

If we don’t act quickly we once again face the peril of the genocide of the Jewish people and the specter of world domination. This is not about one or two presidents failures — it’s about a growing realization that we must organize the rest of the world against fundamentalism. If we don’t, we face another potential dark age. The longer we wait to provide leadership to the world, the more lives it will cost in the end. This is the lesson we learned with Nazism and it is clear we have forgotten that lesson.

Have we forgotten the promises we made at Nuremberg, too?

Justice Robert Jackson captured it well at Nuremberg in 1945. From his oratory:

..the privilege of opening the first trial in history for crimes against the peace of the world imposes a grave responsibility. The wrongs which we seek to condemn and punish have been so calculated, so malignant, and so devastating, that civilization cannot tolerate their being ignored, because it cannot survive their being repeated. That four great nations flushed with victory and stung with injury stay the hand of vengeance and voluntarily submit their captive enemies to the judgment of the law is one of the most significant tributes that Power has ever paid to Reason….

He goes on to say (and quoted in the movie ‘Judgment at Nuremberg’ by Spencer Tracy):

There are those in our own country too who today speak of the ‘protection of country,’ of ‘survival’. A decision must be made in the life of every nation at the very moment when the grasp of the enemy is at its throat. Then, it seems that the only way to survive is to use the means of the enemy, to rest survival upon what is expedient, to look the other way. Well, the answer to that is ‘survival as what’? A country isn’t a rock. It’s not an extension of one’s self. It’s what it stands for. It’s what it stands for when standing for something is the most difficult! Before the people of the world, let it now be noted that here, in our decision, this is what we stand for: Justice, truth, and the value of a single human being.

The United States made a promise to the world at Nuremberg, to not look the other way again. There are those who argue that we cannot be the world’s policemen. To them, I suggest that what we need to do is not the act of policemen, but that of a free nation defending the rights of a people to exist and to ensure its own freedoms in the long run.

Simply blaming Bush or Obama or Carter are failed ideologies. The question is, will the narcissistic and self-indulgent generation of today be able to muster up the moral fortitude to do what needs to be done? Will both the corrupt and rich see the danger soon enough?

Islamic extremism is a more lethal and brutal enemy than the Nazis were. At least the Nazis didn’t prey on their own people and behaved under rules of war. The fundamentalists do not. They kill and butcher with impunity, and the next war will be fought with weapons that are far more deadly.

The Taliban, Al-Qaeda, and whatever other faction are all the same — they are Islamic fundamentalists that seek to destroy and dismember the peoples of a free world and the enlightenment that mankind has managed to achieve these past 500 years. We must recognize them as a common enemy and an enemy to every other nation on the planet.

The extremists have won the day for now, but it remains to be seen if they will win the war. What worries me most is that the people most capable in uniting the world and defying this anti-Semitic tyranny are the people least willing to fight it.
Heaven help our nation, for we seem unwilling to.

With Obama Scandals Piling Up, It's Time For The Left To Come To Grips