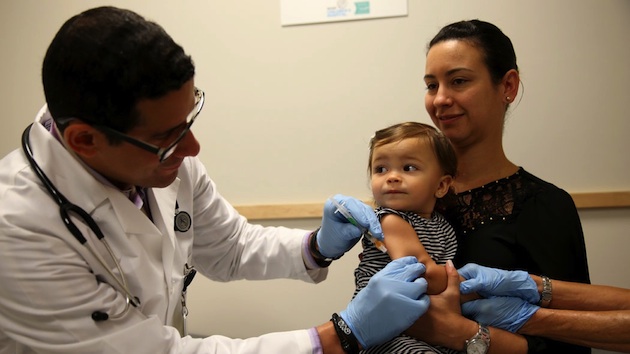 In Mommy Truce, Pulitzer Prize-winning columnist Connie Schultz tackles the issue of vaccines, and overall parenting skills and challenges in light of news.

In the early ’90s, I used to perm my hair into spring coils and wore padded shoulders that gave me the wingspan of a whooper swan, but I thought my biggest problem was my 5-year-old daughter’s occasional bed-wetting.

So off I went to the pediatrician’s office to unravel my woes.

Before we chatted, a kind nurse escorted my daughter to join kids in the supervised playroom, where no one had to worry about exposure to preventable childhood diseases. This column isn’t about our recent measles outbreak or those Republican presidential hopefuls claiming that vaccinations should be left to parental choice. But I can’t stop thinking about the potential damage should this political pandering to the willfully uninformed become an epidemic.

On that day, my daughter’s pediatrician leaned in and nodded thoughtfully as I rambled on about how upsetting it was that my daughter kept waking up in sodden bedclothes. “It makes her cry,” I said, dabbing at tears.

The good doctor smiled. “Easy solution,” he said. “Just have her wear Pull-Ups at night.”

He smiled again. “Connie, 20 years from now, when you watch your daughter walk down the aisle on her wedding day, you aren’t going to be thinking, ‘She wore diapers to bed until she was 6.'”

I bristled at his example — how hard would it have been to imagine her college graduation instead? — but I really couldn’t summon any outrage. His words released me. I bought the Pull-Ups and assured my daughter that she needn’t worry anymore about wetting her bed. A few weeks later, she didn’t need them anymore.

This memory was brought to you by Similac.

The baby formula brand has a new commercial making the rounds on the Web, including on my Facebook page. It’s that rare gift of an ad that has something to offend everyone because everyone brings her own brand of offensiveness. Nursing mothers swing braless breasts at women wielding baby bottles. Other mothers tug at the lapels of their manly dark jackets and speculate aloud about the idleness of the stay-at-home moms who have just accused them of part-time parenting. One stroller-pushing mother, chastised by a baby-wearing mama, brags about how her Precious came into the world: “Drug-free pool birth. Dolphin assisted.”

There’s a quick shot of lesbian mothers, too, because whom they love is a lifestyle choice, you understand. There’s even a group of dads with babies strapped to their chests. Don’t get your hopes up. It doesn’t take long before they’re making breast jokes. In advertising, dads are such reliable clichés.

The ad ends with a moment of supposed camaraderie as everyone abandons his or her agenda long enough to chase a runaway stroller. What a clever ploy: Let’s traffic in the stereotypical mommy wars to sell baby formula. I thought it was ridiculous until I started reading young mothers’ responses.

One of the most common reactions was to describe a personal experience in which one mother tried to make another mother feel guilty about choices regarding child rearing. Nursing was just the start of it. Bedtimes, reading habits, walking versus carrying — name a parental activity and I can recount several nightmare scenarios involving a judgmental somebody.

What strikes me about these conversations is how readily we as women give more authority to our critics. We may have a dozen friends who support and egg us on, but it’s that nasty one person who gets to pitch a tent in the primary real estate of our heads.

Perhaps this happens because pain is more memorable than camaraderie or even joy. I suspect it also has to do with the inherent insecurities of parenting and the easy shame that catches our breath whenever we fear we’ve screwed up. Again.

This anxiety is as true for many of today’s fathers as it is for mothers. So many men now want to know their children at an early age. A father of two little ones told me recently he sometimes posts photos of his kids on Facebook because parenting is often lonely and he wants his friends to know how he’s spending much of his days. In that moment, he sounded like every mother I knew when I had little ones. He sounded a lot like a younger version of me.

I started this column with the story of my daughter’s bed-wetting because it illustrates how I spent so much time worrying about something that ended up not mattering at all. I did breast-feed, by the way, but my mother didn’t, and both my daughter and I grew up strong anyway. Parenting is an accumulation of skills, always.

The only thought flooding my mind as I watched her walk toward the love of her life was, “My girl. My beautiful, beautiful girl.”

Connie Schultz is a Pulitzer Prize-winning columnist and an essayist for Parade magazine. She is the author of two books, including “…and His Lovely Wife,” which chronicled the successful race of her husband, Sherrod Brown, for the U.S. Senate.