HomeOpinionRand And Ted On The Fourth 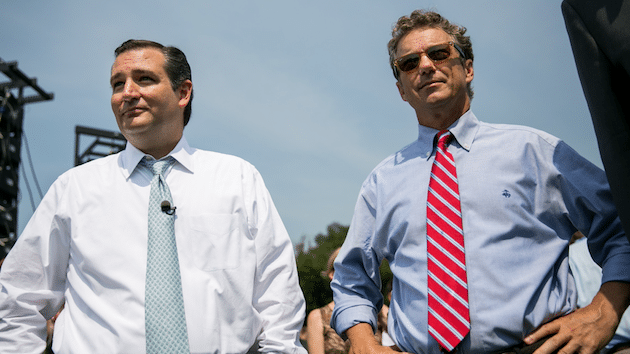 A decision last week about NSA spying by a panel of judges on the United States Court of Appeals in New York City sent shock waves through the government. The court ruled that a section of the Patriot Act that is due to expire at the end of this month and on which the government has relied as a basis for its bulk acquisition of telephone data in the past 14 years does not authorize that acquisition.

This may sound like legal mumbo jumbo, but it goes to the heart of the relationship between the people and their government in a free society. Here is the backstory and the latest.

The Patriot Act is the centerpiece of the federal government’s false claims that by surrendering our personal liberties to it, it can somehow keep us safe. The liberty-for-safety offer has been around for millennia and was poignant at the time of the founding of the American republic.

The Framers addressed it in the Constitution itself, where they recognized the primacy of the right to privacy and insured against its violation by the government by intentionally forcing it to jump through some difficult hoops before it can capture our thoughts, words or private behavior.

Those hoops are the requirement of a search warrant issued by a judge and based on evidence — called probable cause — demonstrating that it is more likely than not that the government will find what it is looking for from the person or place it is targeting. Only then may a judge issue a warrant, which must specifically describe the place to be searched or specifically identify the person or thing to be seized.

None of this is new. It has been at the core of our system of government since the 1790s. It is embodied in the Fourth Amendment, which is at the heart of the Bill of Rights. It is quintessentially American.

The Patriot Act has purported to do away with the search warrant requirement by employing language so intentionally vague that the government can interpret it as it wishes. Add to this the secret venue for this interpretation — the FISA court to which the Patriot Act directs that NSA applications for authority to spy on Americans are to be made — and you have the totalitarian stew we have been force-fed since October 2001.

Because the FISA court meets in secret, Americans did not know that the feds were spying on all of us all the time and relying on their own unnatural reading of words in the Patriot Act to justify it until Edward Snowden spilled the beans on his former employer nearly two years ago.

The feds argued to the secret court that they were entitled to any phone call data they wanted — usually sought by area code or zip code or the customer base of telecom service providers — so long as they claimed to need it to search for communications about terror-related activities, and they claimed they needed EVERYONE’S records, and they claimed the Patriot Act authorized this.

The secret court bought those claims, and — fast-forward to today — the feds now have immediate access to our phone calls in real time. They can turn on our cellphones in our pockets and purses and use them as listening devices without us knowing it, and they have physical access to all telephone carriers’ equipment whenever they wish, which today is 24/7.

Some members of Congress reject this. Foremost among the outraged in the Senate is Kentucky Sen. Rand Paul. It is none of the government’s business, he argues, what we say on our phone calls. If the NSA wants to hear us, let them present probable cause to a judge identifying the person they want to hear and seek a search warrant. Paul’s is a genuine outrage from the only voice among those running for president who is faithful to the Constitution.

Other senators, foremost among them Texas Sen. Ted Cruz, also running for president, are pretending outrage by offering a Band-Aid to replace the Patriot Act called the Freedom Act. The Freedom Act gets the NSA physically out of the telecoms’ offices, but lets them come back in digitally whenever one of these secret FISA courts says so, and the standard for saying so is not probable cause as the Constitution requires. It is whatever the government wants and whenever it wants it.

The so-called Freedom Act would actually legitimize all spying all the time on all of us in ways that the Patriot Act fails to do. It is no protection of privacy; it is no protection of constitutional liberty. It unleashes American spies on innocent Americans in utter disregard of the Fourth Amendment.

Earlier this week, Paul announced that he feels so strongly about the right to be left alone, and takes so seriously his oath to uphold the Constitution, and believes so certainly that our phone calls are none of the government’s business that he plans to filibuster all attempts to permit this to continue. For that alone, he is a hero to the Constitution. Perhaps his friend Cruz will return to his constitutional roots and join him.

How do we know that the Freedom Act is a Band-Aid only? Because the NSA supports it.