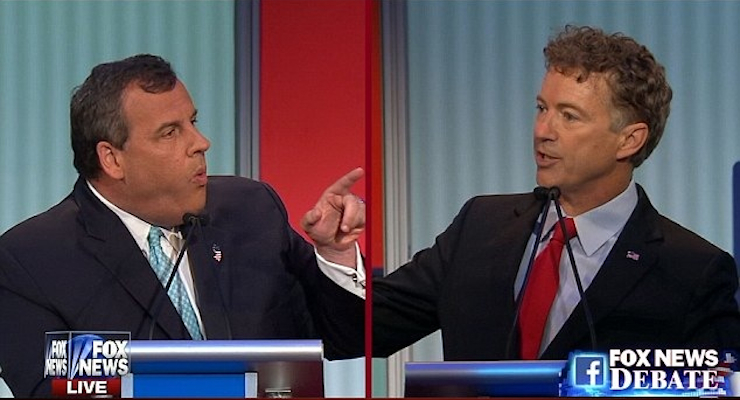 The dust-up between New Jersey Gov. Chris Christie and Kentucky Sen. Rand Paul over presidential fidelity to the Constitution — particularly the Fourth Amendment — was the most illuminating two minutes of the Republican debate last week.

It is a well-regarded historical truism that the Fourth Amendment was written by victims of government snooping, the 1770s version. The Framers wrote it to assure that the new federal government could never do to Americans what the king had done to the colonists.

What did the king do? He dispatched British agents and soldiers into the colonists’ homes and businesses ostensibly looking for proof of payment of the king’s taxes and armed with general warrants issued by a secret court in London.

A general warrant did not name the person or place that was the target of the warrant, nor did it require the government to show any suspicion or evidence in order to obtain it. The government merely told the secret court it needed the warrant — the standard was “governmental need” — and the court issued it. General warrants authorized the bearer to search wherever he wished and to seize whatever he found.

The Fourth Amendment requires the government to present to a judge evidence of wrongdoing on the part of a specific target of the warrant, and it requires that the warrant specifically describe the place to be searched or the person or thing to be seized. The whole purpose of the Fourth Amendment is to protect the right to be left alone — privacy — by preventing general warrants.

The evidence of wrongdoing that the government must present in order to persuade a judge to sign a warrant must constitute probable cause. Probable cause is a level of evidence sufficient to induce a neutral judge to conclude that it is more likely than not that the government will find what it is looking for in the place it wants to search, and that what it is looking for will be evidence of criminal behavior.

But the government has given itself the power to cut constitutional corners. The Foreign Intelligence Surveillance Act, the Patriot Act and the Freedom Act totally disregard the Fourth Amendment by dispensing with the probable cause requirement and substituting instead — incredibly — the old British governmental need standard.

Hence, under any of the above federal laws, none of which is constitutional, the NSA can read whatever emails, listen to whatever phone calls in real time, and capture whatever text messages, monthly bank statements, credit card bills, legal or medical records it wishes merely by telling a secret court in Washington, D.C., that it needs them.

And the government gets this data by area codes or zip codes, or by telecom or computer server customer lists, not by naming a person or place about whom or which it is suspicious.
These federal acts not only violate the Fourth Amendment, they not only bring back a system the Founders and the Framers hated, rejected and fought a war to be rid of, they not only are contrary to the letter and spirit of the Constitution, but they produce information overload by getting all the data they can about everyone. Stated differently, under the present search-them-all regime, the bad guys can get through because the feds have more data than they can analyze, thus diluting their ability to focus on the bad guys.

Among the current presidential candidates, only Paul has expressed an understanding of this and has advocated for fidelity to the Constitution. He wants the government to follow the Fourth Amendment it has sworn to uphold. He is not against all spying, just against spying on all of us. He wants the feds to get a warrant based on probable cause before spying on anyone, because that’s what the Constitution requires. The remaining presidential candidates — the Republicans and Hillary Clinton — prefer the unconstitutional governmental need standard, as does President Obama.

But Christie advocated an approach more radical than the president’s when he argued with Paul during the debate last week. He actually said that in order to acquire probable cause, the feds need to listen to everyone’s phone calls and read everyone’s emails first. He effectively argued that the feds need to break into a house first to see what evidence they can find there so as to present that evidence to a judge and get a search warrant to enter the house.

Such a circuitous argument would have made Joe Stalin happy, but it flunks American Criminal Procedure 101. It is the job of law enforcement to acquire probable cause without violating the Fourth Amendment. The whole purpose of the probable cause standard is to force the government to focus on people it suspects of wrongdoing and leave the rest of us alone. Christie wants the feds to use a fish net. Paul argues that the Constitution requires the feds to use a fish hook.

Christie rejects the plain meaning of the Constitution, as well as the arguments of the Framers, and he ignores the lessons of history. The idea that the government must break the law in order to enforce it or violate the Constitution in order to preserve it is the stuff of tyrannies, not free people.