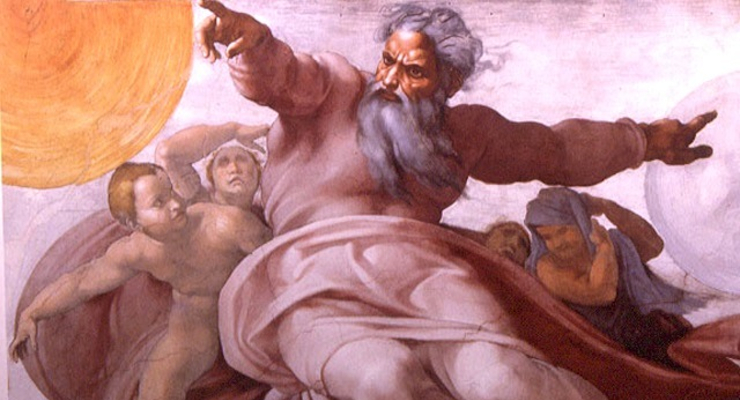 The above picture, from Michelangelo’s frescoes in the Sistine Chapel

As the Christmas season approaches, I want to explain why I am so enthusiastic about the subject matter I’ve written about in my new book, The Emmaus Code: Finding Jesus in the Old Testament.

As I came to Jesus Christ kicking and screaming, I have always been passionate about sharing the epiphanies that led me to become a believer. I love to relate my excitement about the Bible and encourage others to give it a chance–really give it a chance–and to avail themselves of the full riches of God’s Word.

I admit that before I embraced the Gospel, I hadn’t given sufficient serious thought to whether the Bible actually is the Word of God. It’s hard to believe I was so negligent about something that matters so much. To my surprise, I find many people today — adults included — who seem to give this very little thought. It is one of my humble goals with this book to nudge people to contemplate it.

For too many years, I fashioned God in my own image. I thought I could bootstrap my way into understanding who he is without ever going to the very book in which he reveals himself to us and shows us precisely who he is. In retrospect, I wonder how I could have been so unserious as to formulate my beliefs without giving the Word of God a fair hearing. How could I have been so engrossed in my earthly existence that I essentially ignored God’s revelation?

When–in the process of studying Christian apologetics, the Bible and theology–it finally hit me that the Bible is the living Word of the living God, I was blown away. I was stunned, excited and overwhelmed by this truth that I’d avoided for too long. I finally realized that I was holding in my hands a book whose every word was inspired by the God of the universe. I understood that when I opened that book and began to read it, I was opening myself up to God’s direct communication to me.

I’m not talking about sitting around in meditation imagining that I could be receiving promptings from God, which, of course, can also be a legitimate experience. Instead, I’m talking about reading God’s words that were written to me and to you — words that I now understood are unmistakably from him and directed to me individually. This is not a matter of speculation. I had already satisfied myself by putting Christianity’s claims to the test and realizing that every bit of Scripture is God-breathed. I can rely on it for life as surely as I rely on every breath I take for life.

Corniness aside, you can imagine the feelings I experienced with this “aha” discovery. I immediately wanted to inhale every syllable of the Bible and learn everything I could as quickly as I could. How could I possibly ever get enough of this spiritual food?

As I began to learn more, I became eager to share what I’d learned with my friends and family and anyone else who would listen — many of whom, I assumed, had been every bit as negligent as I’d been about this most serious of matters. I wanted to help them enjoy the same kind of excitement that was overtaking me.

I was under no illusion that the people I approached would just automatically embrace my new “discoveries,” no matter how infectious I’d hoped my spirit would be. I also doubted that many would all of a sudden reorder their schedules to begin studying the Bible and theology with relentless fervor.

Perhaps because I wasn’t sufficiently prepared to write such a book then–more than 20 years ago–I abandoned the project. A generation’s worth of years later, I started the project anew, and I completed it this time with “The Emmaus Code.”

I sincerely hope that you will consider picking up the book for yourself or as a Christmas gift for someone else who you believe might benefit from a book designed to introduce readers to the Old Testament and, most importantly, to its essential Christ-centeredness. Everyone owes it to himself to learn as much as he can about God’s Word, and I pray this book will encourage readers to do just that.

Jesus himself told his disciples on the road to Emmaus that they had misunderstood the Scriptures in anticipating that the Messiah would deliver Israel from its political and military enemies. He came not to conquer earthly kings but to die a sacrificial, substitutionary death on our behalf and thereby conquer Satan, sin and death, so that by faith in him, we can live.

He said to them, “O foolish ones, and slow of heart to believe all that the prophets have spoken! Was it not necessary that the Christ should suffer these things and enter into his glory?” Then he “interpreted to them in all the Scriptures (the Old Testament) the things concerning himself.”
Amen.

None Dare to Call it Treason, But What Else Do You Call Appointing Radical Islamic Sympathizers?