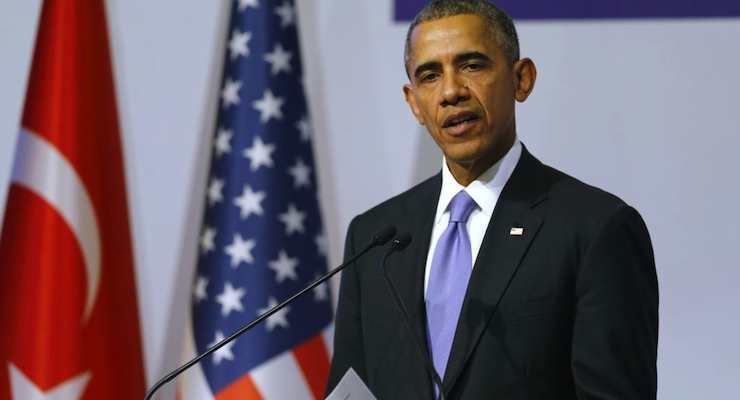 President Barack Obama answers reporters’ questions at a press conference at the G-20 Summit in Turkey on Nov. 16, 2015. (Photo: Reuters)

President Obama’s reckless neglect of America’s national security is a rapidly growing malignancy on this nation, and there are no signs it will get better.

Some might attribute his arrogantly inaccurate assessment of the Islamic State group as “a JV team” or his delusional assertion, hours before the terrorist massacres in Paris, that the Islamic State is “contained” to personal pride or political posturing. After all, he never admits his policies aren’t working, and he is perpetually partisan.

More careful observers, however, see something far more troubling: He simply refuses to inhabit the reality that Islamists are at war with us. Obama is not only in a hermetically sealed bubble on the Islamist threat but also entirely oblivious to the degree to which the majority of Americans disagree with him — or he outright disrespects their view.

What is his default reaction to every terrorist attack on American soil? Before he even has time to receive, much less analyze, the bulk of the evidence on such an attack, he immediately rushes to the presidential microphone and makes two equally bizarre points: that gun ownership is the principal cause of the attack and that we dare not jump to the conclusion that it was motivated by Islam or perpetrated by Islamists.

In fact, the word on the street is that he relishes these attacks — and every other mass shooting — as opportunities to rail against evil guns, their evil owners and their even more evil big-money enablers, such as the National Rifle Association. He is obviously just as adamant to deflect blame from Islamists as he is to blame American gun owners and the gun lobby.

His first instinct is to blame, shame and scold Americans, Christians, gun owners and Republicans and then defend Islam while warning us against Islamophobia. He never reassures Americans he recognizes the threat and is taking the important steps needed to combat it.

Just this past weekend — at a time when Americans are increasingly and rationally nervous about the Islamist threat — he made some more disturbing statements that should remove all doubt about this mindset.

He audaciously claimed that his strategy to combat the Islamic State is working and that the only problems are that saturated media coverage after the Paris attacks is fueling terror fears in the United States and that he hasn’t done enough to communicate his strategy to the people. “We haven’t, you know, on a regular basis, I think, described all the work that we’ve been doing for more than a year now to defeat” the Islamic State.

Where have we heard this type of disconnect before? Remember his reaction to his 2010 congressional defeats, largely over the public’s angst about Obamacare? He never conceded problems with Obamacare, only that he hadn’t done enough to get the message out about its gloriousness, despite his 50 speeches hammering us over the head with it. Translation: The American people are too stupid and self-centered to understand his benevolence and wisdom, so he must spend more time spoon-feeding them instead of concentrating on his wonderful policies. His bad — but not really. Actually, it’s our bad because we’re not decent or enlightened enough to have his attitude toward Islamism, and if we weren’t so bigoted, we’d realize it isn’t a major threat.

Obama also said: “If you’ve been watching television for the last month, all you’ve been seeing, all you’ve been hearing about is these guys with masks or black flags who are potentially coming to get you. And so I understand why people are concerned about it.”

So the problem is that we are creating boogeymen out of guys with masks and flags — as if they’re harmless cartoon characters. Are you serious? And “potentially” coming to get us? How about Fort Hood? Boston? San Bernardino? Terrorist dry runs on airlines, at home and abroad? Endless stories of Islamic horror around the world — persecuting and massacring Christians and Jews and militantly refusing to assimilate in Europe and instead Islamofying the receiving nations, including Britain?

Surely by now, a strong majority of Americans fully recognize just how dangerous Obama’s approach is to their (and America’s) safety and security. How could anyone deny it?

Just let him keep talking. Maybe, before it’s all said and done, he’ll give us 50 “Twilight Zone”-ish speeches on Islamophobia as he did on Obamacare, doing more to elect the next Republican president than any Republican candidate could do for himself.

An Apology to Bernie Sanders