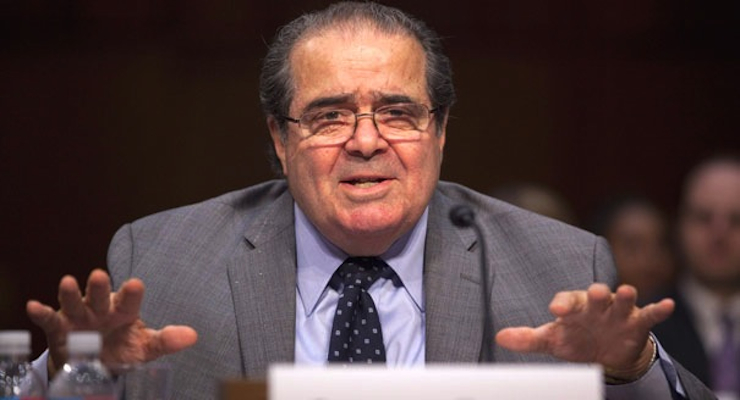 Others put it differently. Comedian and social justice activist Dick Gregory put it this way: “You know they murdered him, right? … One of the most powerful people in the world and he ain’t got no bodyguard, man?”

Radio giant Michael Savage put it this way: “Was Scalia murdered? We need a Warren Commission-like investigation. This is serious business.”

Republican presidential front-runner Donald Trump put it this way, first on a Savage show that was later widely quoted: It’s “pretty unusual” Scalia was found with “a pillow on his face.”

And Judy Melinek, a forensic pathologist who conducts autopsies for the Alameda County Sheriff Coroner’s Office in California and is also the CEO of the consultant firm PathologyExpert Inc., put it this way, in a lengthy opinion piece for CNN: “Even if this decedent weren’t a controversial and powerful national figure, he should have had an autopsy. Why? Because whenever someone is dead in bed at a private residence with a pillow over his head, there is the possibility that the death was not a natural one.”

Did the West Texas authorities who opted against performing an autopsy think — after what the Washington Post labeled in a headline, The Death of Antonin Scalia: Chaos, confusion and conflicting reports, – their decision would simply send the justice quietly into that good night? The reason questions persist in Scalia’s death is that questions have gone unanswered – and no matter how many claims are made to the contrary, the truth is nothing speaks truth like an old-fashioned autopsy.

Look at what the Associated Press just reported: Presidio County District Attorney Rod Ponton, in an interview with the AP, cited a letter from Rear Adm. Brian Monahan, the doctor who serves members of Congress and the Supreme Court, to make this well-repeated point: Nothing to see here about Scalia’s death. Move along. But the letter is hardly proof positive. It was addressed to Presidio County Judge Cinderela Guevara – the local point person who wrapped her death inquiry by telephone, based on findings of local law enforcement rather than on visits to the scene – and concluded Scalia’s sleep apnea, degenerative joint disease, pulmonary problems, high blood pressure and penchant for smoking all contributed to his death. Well, how did Monahan know that, without examining Scalia’s body or the death scene? Yet it was that letter that led Ponton to conclude Scalia’s “significant medical conditions led to his death,” AP reported.

That’s all fine and dandy, but why not release that letter to the public? The AP asked for it, and was given the run-around, first from Ponton then from Guevara, and then from the Texas Department of State Health Services, which denied releasing a copy of Scalia’s death certificate.

How does all this add up to a suspicious-free death?

One more fun fact, fueling the fire: One of Scalia’s close friends, Bryan Garner, returned from a trip to Singapore and Hong Kong with the justice on February 4. After learning of Scalia’s death, he spoke of their trip in an interview with the National Law Journal: “[Scalia] was unbelievably energetic and always on the go. … Having spent 14 hours a day with him so recently, he seemed very strong. I was stunned and shocked [at this death].”

Look, Scalia’s sudden and shocking death could be nothing more than that – a sudden and shocking albeit natural death. But the fact that so many questions have gone unanswered, and that those in position to answer those questions are shrugging their shoulders –a la “Questions? What questions?” – is suspicious in and of itself. An autopsy could have quieted all the whispers. Unfortunately, historical accounts of Scalia’s life and his considerable list of accomplishments, both in and out of court, are now going to be marked with a giant asterisk that overshadows and prods: But was his death really natural?

A Respectful Appeal to Trump Supporters

The GOP Establishment Had it Coming