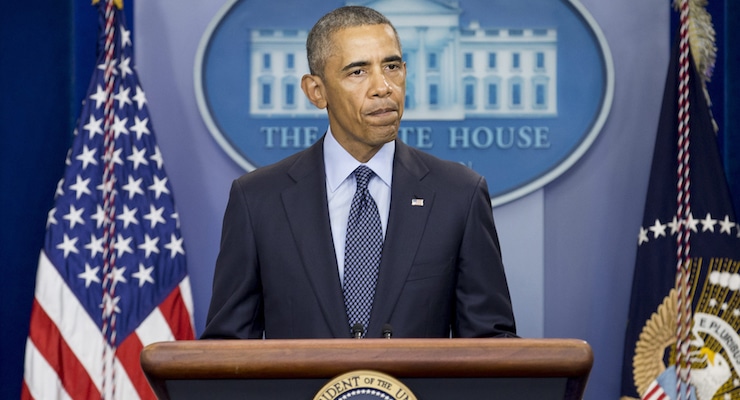 President Barack Obama delivers a statement on the mass shooting at a nightclub in Orlando, Florida, at the White House in Washington, DC, USA, 12 June 2016. (Photo: EPA)

In my most recent column, I discussed President Obama’s disgraceful reaction to the Islamic terrorist massacre of innocents in Orlando. Not to be outdone by his own wrongheadedness, he one-upped himself Tuesday with another doozy.

People often criticize Donald Trump’s personalization of political issues, especially through his tweets, such as when he tweeted, “Appreciate the congrats for being right on radical Islamic terrorism, I don’t want congrats, I want toughness & vigilance. We must be smart!”

No matter how self-focused he is, however, Trump will never be a match for his narcissistic superior Barack Obama, who trotted back to the lectern Tuesday not to express rage against the Islamist perpetrator of this abominable shooting or the radical ideology that spawned it but to throw a public tantrum in response to criticism of his woefully ineffective policies in fighting terrorism. Trump had gotten under his thin skin.

You would think Obama might reserve some emotion for the victims of the carnage or reassure Americans that he intends to ramp up his nonexistent war on terror, but you would be wrong. Few public leaders possess the stunning insensitivity and self-directedness that could lead to such an inappropriate misdirection of outrage.

You might also think that if Obama is going to turn his fire on Trump, he would at least be doing it on behalf of his would-be successor, Hillary Clinton. She, after all — not Obama — will be running against Trump in November, barring some developments that might change that scenario. But you would be wrong again, for his invective was about Obama and Obama alone, not the victims, not America, not Americans, not Clinton and not the Democratic Party. Just Barack. He apparently regards the presidency more as a pulpit from which to defend himself against slights than as a platform from which to reassure the American people, who are sorely in need of some glint of hope that he has the faintest inkling of the threats we face.

Even liberal media outlets, Obama’s usual defenders, were talking about how unpresidential his comments were. “This was the chance for the president to try to bring us together,” said Mike Rogers, former head of the House Intelligence Committee, to CNN’s Jake Tapper. “I think he is so focused on this presidential campaign he let himself go. I just don’t think it looked presidential.”

Obama began by congratulating himself on his “tough” policies and successful record against terrorism — a curious message on the heels of the Orlando slaughter — before launching into a familiar partisan tirade. His protests notwithstanding, everyone knows the Islamic terrorist threat overseas and at home is growing to an alarming level because he still has no strategy — mainly because he won’t acknowledge the threat.

Next, Obama warned that we should “stop making it easy as possible for terrorists to buy assault weapons.” He continued, “Reinstate the assault weapons ban.” Seven-plus years into his presidency, he is still following Rahm Emanuel’s advice that “you never want a serious crisis to go to waste.”

From there, Obama descended into a petulant, sarcastic rant, mocking the critics of his refusal to utter the phrase “radical Islam,” as if they were purely engaged in a meaningless semantic distinction rather than condemning Obama’s recklessly apologetic mindset toward our enemy.

It seems that every time there is an attack by radical Islamists against innocent people, Obama’s first instinct is to defend the religion of Islam, caution against a backlash against Muslims, which rarely occurs, and condemn those who are rightly outraged over the religion’s non-coincidental connection to the various perpetrators. (Hint: They are radical Islamists.)

Obama sneeringly asked what it would change or accomplish if he used the label “radical Islamists,” complaining that this was a “political distraction,” “partisan rhetoric” and a “political talking point.” If labels mean so little, we might ask, why does Obama refuse to call the Islamic State group by the name most Americans call it, ISIS, instead of calling it ISIL? What, pray tell, is in a name?

Obama argues, disingenuously, that by saying “radical Islamist,” we are tainting and alienating an entire religion. But why would it alienate peaceful Muslims to emphasize that it is only the radical among them who are engaged in these activities? Isn’t that a defense of the religion proper?

Even more troubling is Obama’s contention that using the term makes us less safe because it fuels “ISIL’s notion that the West hates Muslims, making young Muslims in this country and around the world feel like no matter what they do, they’re going to be under suspicion and under attack.”

But radical Islamists attack and kill people not because of their rhetoric or their leaders’ policies but because they believe they have a God-ordained duty to subjugate and kill “infidels.” They recruit by pointing not to injustices but to Quranic scriptures commanding the extinguishment of nonbelievers.

Obama has been in denial and mollycoddling this deadly threat for over seven years, and where has it gotten us? We are seeing a dramatic increase in the threat; that’s where. It’s no wonder Obama is so defensive in the aftermath of yet another massacre. His approach is dangerous, and his policies are making us strikingly less safe. So instead of changing directions — something he’s congenitally incapable of doing — he attacks his rightful critics.

Well, he can save his phony indignation and propaganda, because few are buying them anymore. America is less safe not simply because Obama’s rhetoric doesn’t comport with reality but because his thoughts and actions don’t.
[mybooktable book=”the-emmaus-code-finding-jesus-in-the-old-testament” display=”summary” buybutton_shadowbox=”true”]

Orlando is Why We Need Surveillance