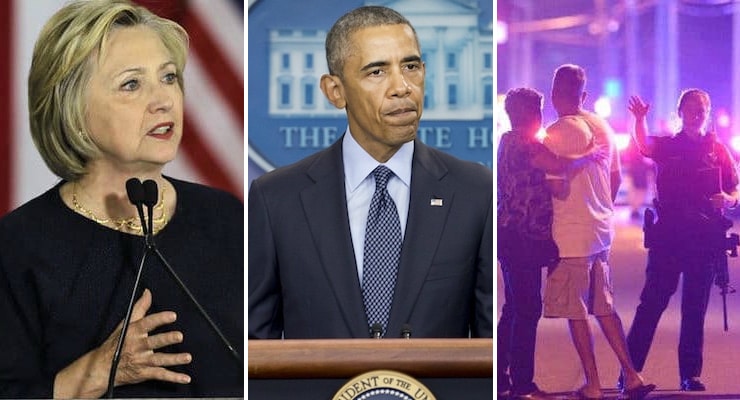 Hillary Clinton, left, speaks at the Cleveland Industrial Innovation Center, while President Barack Obama, center, delivers a statement on the terror attack at the Pulse nightclub in Orlando, Florida, on June 12, 2016. (Photos: AP/EPA)

Surely murder is a serious subject, which ought to be examined seriously. Instead, it is almost always examined politically in the context of gun control controversies, with stock arguments on both sides that have remained the same for decades. And most of those arguments are irrelevant to the central question: Do tighter gun control laws reduce the murder rate?

That is not an esoteric question, nor one for which no empirical evidence is available. Think about it. We have 50 states, each with its own gun control laws, and many of those laws have gotten either tighter or looser over the years. There must be tons of data that could indicate whether murder rates went up or down when either of these things happened.

But have you ever heard any gun control advocate cite any such data? Tragically, gun control has become one of those fact-free issues that spawn outbursts of emotional rhetoric and mutual recriminations about the National Rifle Association or the Second Amendment.

If restrictions on gun ownership do reduce murders, we can repeal the Second Amendment, as other Constitutional Amendments have been repealed. Laws exist to protect people. People do not exist to perpetuate laws.

There are data not only from our 50 states but also from other countries around the world. Professor Joyce Lee Malcolm’s empirical study, “Guns and Violence: The English Experience,” should be eye-opening for all those who want their eyes opened, however small that number of people might be.

Many gun control advocates have cited the much higher murder rates in the United States than in England as due to tighter gun control laws in England. But Professor Malcolm’s study points out that the murder rate in New York has been some multiple of the murder rate in London for two centuries — and, during most of that time, neither city had serious restrictions on gun ownership.

As late as 1954, “there were no controls on shotguns” in England, Professor Malcolm reported, but only 12 cases of armed robbery in London. Of these only 4 had real guns. But in the remainder of the 20th century, gun control laws became ever more severe — and armed robberies in London soared to 1,400 by 1974.

“As the numbers of legal firearms have dwindled, the numbers of armed crimes have risen” is her summary of that history in England. Conversely, in the United States the number of handguns in American homes more than doubled between 1973 and 1992, while the murder rate went down.

There are relevant facts available, but you are not likely to hear about them from politicians currently pushing for tighter gun control laws, or from the mainstream media, when those facts go against the claims of gun control advocates.

Despite hundreds of thousands of times a year when Americans use firearms defensively, none of those incidents is likely to be reported in the mainstream media, even when lives are saved as a result. But one accidental firearm death in a home will be broadcast and rebroadcast from coast to coast.

In both England and the United States, those people most zealous for tighter gun control laws tend also to be most lenient toward criminals and most restrictive on police. The net result is that law-abiding citizens become more vulnerable when they are disarmed and criminals disobey gun control laws, as they disobey other laws.

The facts are too plain to be ignored. Moreover, the consequences are too dangerous to law-abiding citizens, whose lives are put in jeopardy on the basis of fact-free assumptions and unexamined dogmas. Such arguments are a farce, but not the least bit funny.
[mybooktable book=”wealth-poverty-and-politics-an-international-perspective” display=”summary” buybutton_shadowbox=”true”]