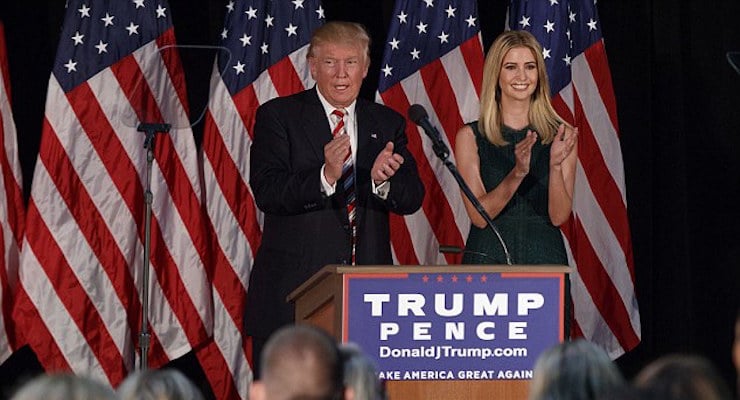 Donald Trump wants the federal government to subsidize child care. If enacted, this policy is sure to increase costs and lead to inefficiency, just as similar types of intervention have caused problems in both healthcare and higher education.

While Trump’s proposal is misguided, it hasn’t generated much surprise because politicians routinely try to buy votes with other people’s money.

I was surprised, however, when the normally market-friendly American Enterprise Institute began to publish articles starting a few years ago in support of government policies on the related issue of paid family leave. I was even more surprised when I saw that AEI teamed up with the left-leaning Brookings Institution on a joint “Project on Paid Parental Leave.”

This is not an April Fool’s joke.

And I’m not the only one who is perplexed that someone at AEI is pushing one of Hillary Clinton’s favorite policies. In a comment on one of the AEI articles, a reader asks a very pointed question.

…why, exactly, a purported conservative think-tank would like to impose a one-size-fits-all, top-down national policy upon all businesses in all states, regardless of cost, on the flimsy argument that ‘It’s a good thing.’

Aparna Mathur, AEI’s Co-Directors of the Project, has an article responding to the question of whether intervention from Washington can be considered pro-freedom or pro-market.

To her credit, she basically admits that the answer is no.

I see your point that encouraging a federal paid family leave plan goes against the idea of limited government.

…we don’t think markets are the end-all solution here… If we don’t intervene, then that’s how it’s going to continue. …I also agree with your point that this will be a burden on businesses. …we have to be open to the idea that in some areas, markets fail or may under-provide a benefit. And in those cases, for the larger good of society…, we need to accept some sharing of costs.

But while she admits the policy is statist, she nonetheless justifies it because there ostensibly is a market failure.

I’m temped to explain why this is nonsense. After all, the fact that we can’t have everything we want because of scarcity and trade-offs is one of the reasons market exist, not evidence of failure.

But I don’t need to explain because one of Ms. Mathur’s colleagues already has done the job. Here’s some of what Benjamin Zycher wrote on this topic.

There are no free lunches, and the mere fact that expanded paid leave in isolation would be very nice for some or many workers says little about the unavoidable tradeoffs.  Would a given worker or group of workers prefer more such leave combined with lower explicit wages, or with fewer other nonwage benefits, or with employer demands for higher productivity? …with respect to the new moms returning to work soon after giving birth: Was that not their choice?  Yes, in almost all cases, and it is not clear from Mathur’s discussion precisely why such costs ought to be “shared across society.” …Whatever “socializing the costs” comes to mean, it is inevitable that the proponents of such a policy, unconcerned with the expansion of government power, will demand that businesses give something up…  So much again, for the free-lunch atmospherics: Such increases in costs will reduce employment… Which brings us to the final assertion: “In some areas, markets fail or may underprovide a benefit.”  Wow.  What does “underprovide” mean?  …there are only two basic approaches to answering that question.  The first: the outcomes emerging from competitive markets, in this case the amount of paid leave employers offer to employees and the amount that employees are willing to accept as part of total compensation, including working conditions defined broadly.  Mathur simply rejects that outcome as too little.  The second: Political determination of the appropriate amount of paid leave, in which majorities impose their will on everyone regardless of individual preferences.  Why stop at paid leave?  Why not have voters determine wages, vacation policies, dress codes, and everything else?  And are voters really qualified to do so?

I especially like Zycher’s final point. The notion that 51 percent of people should be able to dictate the terms of contracts to both employers and employees is offensive.

Indeed, rejection of untrammeled majoritarianism was one of the main goals of America’s Founders when they put together the Constitution.

And since we’re on the topic of majoritarianism, Professor Don Boudreaux explainsthat favorable opinion polls for mandated parental leave are both irrelevant and misleading.

Of course that’s what the polls show – which is precisely why such polls are unreliable in cases such as this.  We need take no polls to discover that people generally prefer to get benefits at a cost to them of nothing.  Such ‘information’ is hardly newsworthy.  …I want, for example, a brand new Mercedes-Maybach S600, but because I’m unwilling to pay the hefty price for the benefit that owning such a car would give to me, the correct conclusion is that I do not really want such a car given its cost.

In other words, Boudreaux and Zycher both agree that there’s no free lunch. Paid leave, mandated by government, necessarily imposes a cost.

And what’s really ironic about this issue is that some honest female analysts acknowledge that women will bear a lot of the cost. Simply stated, employers will provide them lower cash wages to offset the liability that is created by the government intervention.

P.S. To the credit of AEI, it employs one of the nation’s best scholars on the faux issue of the gender pay gap (and you know it’s a fake issue because even Obama’s economic advisor dismissed the silly claim that markets deliberately overpay men).

Mr. President, What the Hell Happened to Putting America First?