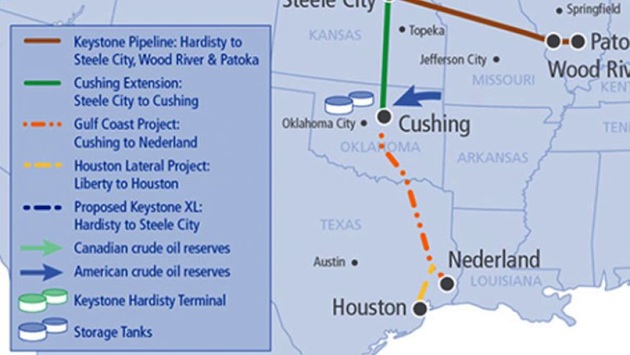 A 485-mile segment of the Keystone Pipeline connecting Cushing, Okla., and Nederland, Texas, is a boon to local economies, according to a new study. (TransCanada)

The president downplayed the economic benefit of approving the Keystone XL pipeline after caving to radical environmentalists, when he delayed the construction indefinitely. But a new study released last week found that a 485-mile stretch of the Keystone XL pipeline has been a huge economic boon for some two dozen poor Oklahoma and Texas counties, leading many economists to conclude the construction will pay greater-than-expected economic dividends.

The study found that the Keystone XL pipeline, if approved, will offer the same economic benefits to five other states, which is far more beneficial than others previously estimated and the president has conceded.

A team of university researchers released a report showing the economic benefits of Keystone’s Gulf Coast Pipeline, a small section of  the $5 billion pipeline, which came online back in January following 17 months of construction. The section connects Cushing, Okla., and Nederland, Tex, and areas have experienced tremendous economic growth.

The study was conducted by the Maguire Energy Institute at Southern Methodist University, and it found that the pipeline has so far injected $3.6 billion into the Texas economy and $2.1 billion into the Oklahoma economy. The project is responsible for creating thousands of jobs, both directly and indirectly. Also in line with other predictions from supporters on the right, the study claims it has increased tax revenues by millions of dollars.

“Similar state and local economic benefits can be anticipated should the United States give the go-ahead for construction of the Keystone XL pipeline from Hardisty, Albert, to Steele City, Neb.,” the report concluded.

TransCanada Corp. the firm behind the construction, shelled out $2.3 billion to build the Gulf Coast Pipeline, which created nearly 5,000 construction jobs directly. The study concluded that TransCanada spent $6 million per month on the project, a mere fraction of the cost government spends on similar projects that provide far less in return economically.

“Local restaurants, hotels, and businesses experience a significant boost thanks to the construction of the Gulf Coast Project,” the study said.

“These are small rural counties, and they are also low-income counties, so this project was a real shot in the arm for them,” the author Bernard Weinstein said. Weinstein told FoxNews.com that the governments in the 24 counties the Gulf Coast Pipeline runs through saw more than $72 million in tax receipts as a direct result of the pipeline.

To be fair, the report was commissioned by the Consumer Energy Alliance, which is a proponent of the larger Keystone project. However, the alliance include some of the world’s biggest energy firms, including Exxon Mobil, BP and Shell Oil. They contend the study is a serious and, even conservative, estimate.

“These are real numbers,” said Executive Vice President Michael Whatley. “What it shows is the construction of the southern half has been immensely helpful and the economic impacts in those counties are very real.”

Yet, despite the overwhelming number of studies and reviews, opponents are arguing the same points addressed and debunked in the last State Department review released earlier this year. The last review released January 31 gave the Keystone XL pipeline the okay, finding no major potential environmental hazards and even concluding that the effects on greenhouse gas emissions would be a reduction if the pipeline was constructed.

Alec Johnson, of Tar Sands Blockade, an radical environmental group focused on the Gulf Coast, said oil companies are guilty of distort the purported economic benefits of their business, and said the study is an example of that.

“It makes no mention of the fact that the fossil fuel industry spews 98 million tons of carbon dioxide into the atmosphere every day, treating out vital public commons – the atmosphere – as an open sewer,” Johnson said. “They pay nothing for that.”

However, the State Department said Canadian tar sands are likely to be developed regardless of whether the U.S. will be the benefactor of the pipeline, noting other options to get the oil from Canada to Gulf Coast refineries. Without the pipeline, the product may get to refineries by other means, including railroads, trucks and barges, which they say would emit greater levels of greenhouse gases .

Three phases of the Keystone Pipeline system have been completed. The fourth phase, which has caused the most controversy, needs President Obama’s approval because the project crosses Canada. In April, Obama announced he was delaying a decision indefinitely. Now, a decision is not anticipated until after the mid-term elections in November, because Obama and the Democrats are hoping to excite the radical left during a cycle that normally results in low turnout among key Democratic constituents.

Embattled Democrats in red, energy-based states, are feeling the political fallout over the project. Polling shows Americans nationwide overwhelmingly favor construction of the Keystone XL pipeline, with even larger levels of support in states where Democrats face tough reelection. Louisiana Senator Mary Landrieu finds herself in a precarious position as the new chair of the Energy and Natural Resources Committee, either unwilling or unable to influence the president and energy policy. Then again, PAC has a documented track record of supporting opponents of the oil and gas industry.

The project was announced in 2008, and construction on the Gulf Coast Pipeline began in August 2012. The pipeline will have the initial capacity to transport 700,000 barrels of oil from day from underground storage tanks in Cushing to Gulf Coast refineries.