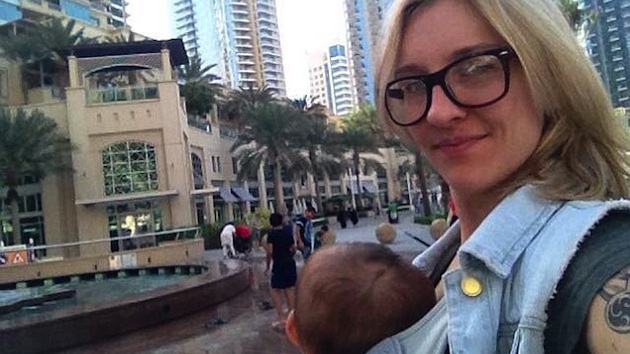 Unemployed single mother Kay Bird, who has admitted spending £3,000 of taxpayers’ cash on a round-the-world trip to far flung destinations with her 10-month-old baby Chloe. She is pictured with her daughter in Dubai. (Photo: @FrontPage/DailyMail)

Since I’m in the United Kingdom, it’s appropriate to announce that another Briton has been elected to the Moocher Hall of Fame. Ms. Kay Bird deserves this “honor” because it takes a very reprehensible entitlement mentality to brag about taking a global holiday with welfare cash.

And we’re talking about a global holiday that appears to be far more extravagant than the foreign trips enjoyed by Natalija, another member of the Moocher Hall of Fame.

Here are some of the jaw-dropping details from a report in the U.K.-based Daily Mail.

A single mother on benefits has admitted spending £3,000 of taxpayers’ cash on a dream round-the-world trip to far flung destinations with her 10-month-old baby daughter. …she still receives more than £8,500 a year in child benefit, income support and tax credits as it is considered that she has a low income. …she visited places such as Australia, Bali and Dubai. Miss Bird says she could work but chooses not to… She said: ‘No, I don’t need the money as such and I didn’t need to go travelling either but I wanted to so I did. ‘If someone’s offering you free money and telling you to take it, you’d have to be a fool not to – that’s all I did. …‘I don’t feel guilty and I don’t regret it. It started off just as a ­holiday to Athens, then things started to fall into place.

Let’s think through her statement about “free money.” Is she really so clueless that she doesn’t realize that her handouts are only possible because other people are actually working and producing?

She says “I don’t feel guilty,” which is remarkable because I doubt taxpayers who financed her jaunt have ever been to Dubai and Bali.

‘Each time some more money landed in my account, I booked something. ‘I started booking flights and accommodation in Europe in October and was booking something with every payment until a few days before I went.’ …She also visited Athens, Istanbul, Dubai, Colombo in Sri Lanka, Kuala Lumpur, Jakarta, Bali and Darwin before returning home via Amsterdam. In total, she spent four months worth of her benefits cash on the trip, paying for 13 flights, travel visas, accommodation and spending money. Her benefits continued to be paid into her bank account while she was away and she returned to the UK just before the five-week travel limit imposed on people claiming Jobseekers’ Allowance.

I have to confess that I’m mystified how someone who chooses not to work can get a handout called “jobseekers’ allowance.” I wonder if MHoF members Danny and Gina are benefiting from the same scam?

In any event, the bureaucrats seem more concerned with enabling welfare fraud than in protecting the interests of taxpayers.

She added: ‘I went to the job centre and told them I wanted to go travelling and they told me there was a five-week limit. I came home just within those five weeks so my benefits didn’t get cut off.’ …she was claiming £90 a week income support, £90 a month child benefit and £230 a month in tax credits. She said: ‘I told them I wanted to register back in the country and they told me I was already eligible for Jobseekers’ Allowance. ‘Then a couple of weeks later they said I could switch to income support which meant I didn’t even have to apply for jobs. ‘Then I was told I could get tax credits, too. I was really shocked at how generous it was but I wasn’t going to turn it down.’

I’m sure British taxpayers will be delighted to learn that Ms. Bird is already planning her next welfare-financed overseas holiday.

Now she says she is planning her next luxury trip for herself and daughter which will be to New Zealand. …She explained: ‘I’m not your regular single mum on benefits who spends it all in McDonald’s and never leaves the town they were born in. ‘I’m changing the image of what it is to be a benefits mum and proving that if you do it the right way, you can have ­anything you want. …’Of course people are negative and many people get very jealous. ‘But I had only been out of Europe once before I went on benefits and now I’ve had the chance to see some incredible things from tropical beaches to the ­skyscrapers of Dubai. ‘I never would have been able to afford it without benefits.’

Gee, doesn’t that warm your heart. She’s a trailblazer, showing other deadbeats how you can live like a jet-setter with other people paying the bills! 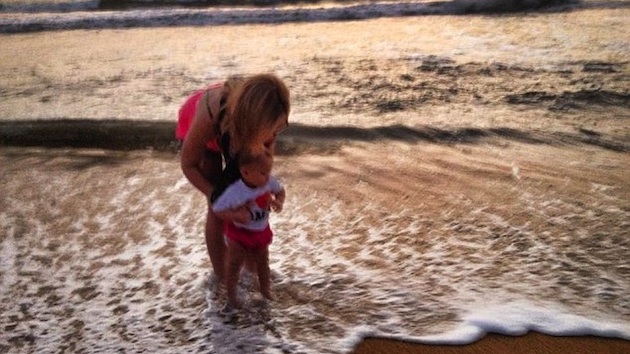 Miss Bird and her young daughter splash around in the Indian Ocean during the trip. The young mother receives more than £8,500 in various benefits. (Photo: @FrontPage/DailyMail)

Yes, Ms. Bird definitely deserves to be in the Moocher Hal of Fame.

P.S. Since we’re talking about reprehensible welfare moochers, let’s shift from the U.K. to Australia.

It appears that there are lots of Aussie Muslims who want to join the “Terror Wing” of the Moocher Hall of Fame.

Here are some excerpts in a story from the Aussie-based Daily Telegraph.

A federal investigation into the welfare status of Australian foreign fighters, prompted last year by revelations in The Telegraph, shows 96 per cent had been on welfare benefits when they fled to the Middle East. Most had continued to collect payments from Australian taxpayers while training with Islamic State to become terrorists intent on wanting to kill Australians. The investigation has captured the records of 57 Australians who left the country before October last year to fight with the Islamic State. Of that number 55 have been confirmed to have been on welfare payments.

Wow, 96 percent of the identified terrorists who came from Australia were subsidized by taxpayers.

And there are more welfare-fueled terrorists on the way, perhaps recruited by Abdul, who’s been sponging off Australian taxpayers for about two decades.

Since then, an estimated 50 more Australians have ­illegally travelled to the Middle East to join IS, with most believed to have been claiming some form of benefit. A subsequent audit of this group confirmed that most had been at one time in ­receipt of benefits such as Newstart, sickness, youth and carer’s allowances, as well as the Disability Support Pension.

So let’s summarize. Able-bodied young men who are healthy enough to join a fight in the Middle East somehow were somehow so helpless that they needed welfare handouts to survive in Australia.

In reality, of course, these low-life deadbeats surely were capable of working, but they doubtlessly thought it was wonderful that the people they hate were subsidizing their sloth.

All the more reason why policymakers in all nations should reduce the size of the welfare state.

But it’s equally important to decentralize so that local and regional governments are responsible for redistribution programs. Under such an approach, I suspect we’d be far more likely to see the imposition of standards to preclude mooching by able-bodied adults, whether they’re run-of-the-mill moochers or terrorists-in-training.

Obama's Free College Plan Is About Quantity, Not Quality