HomePolicyData Suggest We Should Shutdown Department Of Education

To save the nation from a future Greek-style fiscal meltdown, we should reform entitlements. But as part of the effort to restore limited, constitutional government, we also should shut down various departments that deal with issues that shouldn’t be handled by the central government.

Get rid of the Department of Housing and Urban Development.

Shut down the Department of Agriculture.

Eliminate the Department of Transportation.

We need to add the Department of Education to the list. And maybe even make it one of the first targets.

Increasing federal involvement and intervention, after all, is associated with more spending and more bureaucracy, but NOT better educational outcomes. 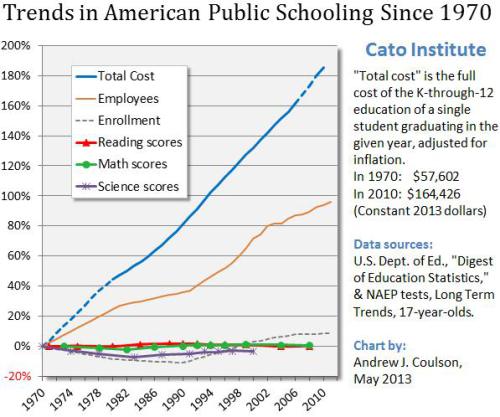 Politicians in Washington periodically try to “reform” the status quo, but rearranging the deck chairs on the Titanic never works. And that’s true whether you look at the results of GOP plans, like Bush’s no-bureaucrat-left-behind scheme, or Democratic plans, like Obama’s Common Core.

The good news, as explained by the Washington Examiner, is that Congress is finally considering legislation that would reduce the federal government’s footprint.

There are some good things about this bill, which will serve as the reauthorization of former President George W. Bush’s No Child Left Behind law. Importantly, the bill removes the Education Department’s ability to bludgeon states into adopting the controversial Common Core standards. The legislative language specifically forbids both direct and indirect attempts “to influence, incentivize, or coerce” states’ decisions. …The Student Success Act is therefore a step in the right direction, because it returns educational decisions to their rightful place — the state (or local) level. It is also positive in that it eliminates nearly 70 Department of Education programs, replacing them with more flexible grants to the states.

But the bad news is that the legislation doesn’t go nearly far enough. Federal involvement is a gaping wound caused by a compound fracture, while the so-called Student Success Act is a band-aid.

…as a vehicle for moving the federal government away from micromanaging schools that should fall entirely under state and local control, the bill is disappointing. …the recent explosion of federal spending and federal control in education over the last few decades has failed to produce any significant improvement in outcomes. Reading and math proficiency have hardly budged. …the federal government’s still-modest financial contribution to primary and secondary education has come with strings that give Washington an inordinate say over state education policy. …The Student Success Act…leaves federal spending on primary and secondary education at the elevated levels of the Bush era. It also fails to provide states with an opt-out.

To be sure, there’s no realistic way of making significant progress with Obama in the White House.

But the long-run battle will never be won unless reform-minded lawmakers make the principled case. Here’s the bottom line.

Education is one area where the federal government has long resisted accepting the evidence or heeding its constitutional limitations. …Republicans should be looking forward to a post-Obama opportunity to do it for real — to end federal experimentation and meddling in primary and secondary education and letting states set their own policies.

But now let’s acknowledge that ending federal involvement and intervention should be just the first step on a long journey.

State governments are capable of wasting money and getting poor results.

Local governments also have shown that they can be similarly profligate and ineffective.

Indeed, when you add together total federal/state/local spending and then look at the actual results (whether kids are getting educated), the United States does an embarrassingly bad job.

The ultimate answer is to end the government education monopoly and shift to a system based on choice and competition.

Fortunately, we already have strong evidence that such an approach yields superior outcomes.

To be sure, school choice doesn’t automatically mean every child will be an educational success, but evidence from Sweden, Chile, and the Netherlands shows good results after breaking up state-run education monopolies.

P.S. Let’s close with a bit of humor showing the evolution of math lessons in government schools.

P.P.S. If you want some unintentional humor, the New York Times thinks that government education spending has been reduced.

P.P.P.S. And you’ll also be amused (and outraged and disgusted) by the truly bizarre examples of political correctness in government schools.