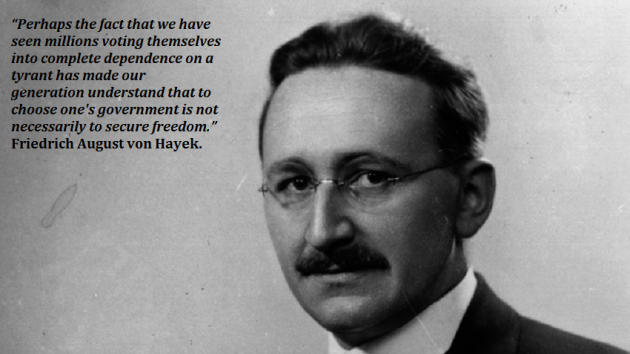 I wrote just yesterday about new evidence showing that decentralized government is more efficient. Part of the reason is because local governments are easier for voters to monitor and more likely to reflect the actual preferences of residents.

Another reason is tax competition. It’s relatively easy to “vote with your feet” by moving from one community to another, and this makes it difficult for interest groups and politicians to impose excessive tax burdens.

Now we have some serendipity.

I’m in Gdansk, Poland, for a Liberty Fund seminar on “Economic Growth, Entrepreneurship, and the Future of the Welfare State.”

Two of the readings, by great scholars from the Austrian school of economics, had passages about the importance of decentralization. In 1960, here’s some of what Friedrich Hayek wrote in his classic, The Constitution of Liberty.

While it has always been characteristic of those favoring an increase in governmental powers to support maximum concentration of these powers, those mainly concerned with individual liberty have generally advocated decentralization. There are strong reasons why action by local authorities offers the next-best solution…it has many of the advantages of private enterprise and fewer of the dangers of coercive action by government. Competition between local authorities or between larger units within an area where there is freedom of movement…will secure most of the advantages of free growth. Though the majority of individuals may never contemplate a change of residence, there will usually be enough people, especially among the young and more enterprising, to make it necessary for the local authorities to provide as good services at a reasonable costs as their competitors. It is usually the authoritarian planner who…supports the centralist tendencies.

I should have remembered that quote from my collection of pro-tax competition statements by Nobel laureates.

In any event, I’m glad my memory was refreshed.

And here’s some of what Ludwig von Mises wrote in his 1944 book, Omnipotent Government. He approached the issue from the opposite direction, explaining that proponents of redistribution needed centralization so their intended victims couldn’t escape by moving across city borders.

Every step toward more government interference and toward more planning means at the same time an expansion of the jurisdiction of the central government. …It is a very significant fact that the adversaries of this trend toward more government control describe their opposition as a fight against Washington…against centralization. …This evolution is not accidental. It is the inevitable outcome of policies of interference and planning. …There can be no question of adopting these measure for only one state. It is impossible to raise production costs within a territory not sheltered by trade walls.

So the statists were smart to oppose welfare reform, since that meant decentralization and less wasteful and counterproductive spending.

All of which means, of course, that the rest of us (at least those of us who value liberty) should follow the wisdom of Hayek and Mises.

P.S. Hayek even has groupies.

P.P.S. And Hayek even came back to life for Part I and Part II of the Hayek v Keynes rap videos.