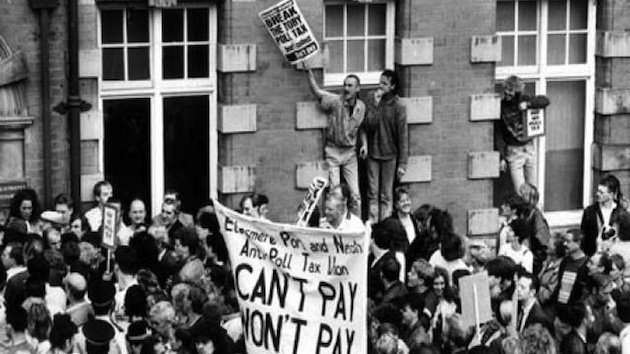 Civil disobedience is a powerful and traditional way for Americans to resist bad government policy. The most famous example is the way civil rights leaders used disobedience (and armed self defense) to help end the Jim Crow laws imposed by state governments.

It’s also encouraging that gun owners have no intention of obeying bad gun control laws, with evidence of massive resistance to bad laws in states such as Connecticut, Colorado, and New York.

And motorists ended the use of speed (i.e., revenue) cameras in Arizona in part by simply ignoring the fines that arrived in the mail (folks in Houston needed to use a referendum).

These are encouraging stories, but we also need to be realistic about the fact that most Americans meekly comply with lots of other bad laws and regulations imposed by greedy and overbearing governments.

The regulatory burden in the United States has become absurd, for instance, but it’s difficult to envision a successful strategy to resist various bureaucratic impositions.

The great scholar Charles Murray has a column in the Wall Street Journal about fighting back against the regulatory state.

He begins with a very depressing assessment.

America is no longer the land of the free. We are still free in the sense that Norwegians, Germans and Italians are free. But that’s not what Americans used to mean by freedom. It was our boast that in America, unlike in any other country, you could live your life as you saw fit as long as you accorded the same liberty to everyone else. …with FDR’s New Deal and the rise of the modern regulatory state, our founding principle was subordinated to other priorities and agendas. What made America unique first blurred, then faded, and today is almost gone.

In some sense, we’ve been buried by red tape.

…consider just the federal government. The number of federal crimes you could commit as of 2007 (the last year they were tallied) was about 4,450, a 50% increase since just 1980. A comparative handful of those crimes are “malum in se”—bad in themselves. The rest are “malum prohibitum”—crimes because the government disapproves.

This is something that we’ve already discussed. I made the distinction just the other day between real crimes (which involve an infringement on someone else’s life, liberty, and property) and innocent behavior that is criminalized by government.

But it’s even worse when folks have no idea how to be compliant.

Everyone knows how to obey the laws against robbery. No individual can know how to “obey” laws such as Sarbanes-Oxley (810 pages), the Affordable Care Act (1,024 pages) or Dodd-Frank (2,300 pages). We submit to them. The laws passed by Congress are just the beginning. In 2013, the Code of Federal Regulations numbered over 175,000 pages.

Especially when constitutional protections are weakened.

And the insult to injury is that many regulations make no sense.

Regulations that waste our time and money are bad enough. Worse are the regulations that prevent us from doing our jobs as well as we could—regulations that impede architects from designing the most functional and beautiful buildings that would fit their clients’ needs, impede physicians from exercising their best judgment about their patients’ treatment, or impede businesses from identifying the best candidates for job openings. …Public-school teachers typically labor under regulatory regimes that prescribe not only the curriculum but minutely spell out how that curriculum must be taught—an infantilization of teachers that drives many of the best ones from the public schools.

So what’s the solution?

You can fight these bureaucrats in their kangaroo courts, or maybe even force the case into a real court.

But Murray acknowledges that this is prohibitively expensive.

…when the targets of the regulatory state say they’ve had enough, that they will fight it in court, the bureaucrats can—and do—say to them, “Try that, and we’ll ruin you.”

Charles has an idea of how to overcome this problem.

…the regulatory state is the Wizard of Oz: fearsome when its booming voice is directed against any single target but, when the curtain is pulled aside, revealed as impotent to enforce its thousands of rules against widespread refusal to comply. And so my modest proposal: Let’s withhold that compliance through systematic civil disobedience. Not for all regulations, but for the pointless, stupid and tyrannical ones.

…it should be OK to ignore the EPA when it uses a nonsensical definition of “wetlands” to forbid you from building a home on a two-thirds-acre lot sandwiched between other houses and a paved road…there’s no reason for the government to second-guess employer and employee choices on issues involving working hours and conditions that don’t rise to meaningful definitions of “exploitation” or “unsafe.” …Let’s just ignore them and go on about our lives as if they didn’t exist.

That’s sounds nice, but how does one overcome the risk of discriminatory and abusive prosecution and persecution by miffed bureaucrats?

Here’s the clever proposal Charles has for the private sector.

Let’s treat government as an insurable hazard, like tornadoes. …let’s buy insurance that reimburses us for any fine that the government levies and that automatically triggers a proactive, tenacious legal defense against the government’s allegation even if—and this is crucial—we are technically guilty. Why litigate an allegation even if we are technically guilty? To create a disincentive for overzealous regulators. The goal is to empower citizens to say, “If you come after me, it’s going to cost your office a lot of time and trouble, and probably some bad publicity.”

People presumably will be willing to fight if they have some free talent coming to their defense.

I propose…a legal foundation functioning much as the Legal Services Corporation does for the poor, except that its money will come from private donors, not the government. It would be an altruistic endeavor, operating exclusively on behalf of the homeowner or small business being harassed by the regulators. The foundation would pick up all the legal costs of the defense and pay the fines when possible.

The measures I propose won’t get the regulations off the books, nor will they improve the content of those regulations, but they will push the regulatory agencies, kicking and screaming, toward a “no harm, no foul” regime. They will be forced to let the American people play.

And if you want to see this strategy in the form of a picto-graph, this is a very helpful depiction.

I mentioned yesterday that I was in Poland for a Liberty Fund conference.

After the conference, I had the opportunity to visit the Solidarity Museum, which commemorated the 1980 protests against communism at the Gdansk shipyards.

Here’s an image that warmed my heart. One of the rooms had a tape of Poland’s communist dictator announcing martial law. Here’s a screen capture of him saying there’s no turning back from socialism.

Gee, that didn’t turn out to be the case.

And that speech should be a permanent memorial about the evil of communism. And if you want further reminders, click here, here, and here.

Time To End The Fed? The Origin Of Central Banking And Possible Alternatives