When I first came to Washington back in the 1980s, there was near-universal support and enthusiasm for a balanced budget amendment among advocates of limited government.

The support is still there, I’m guessing, but the enthusiasm is not nearly as intense.

There are three reasons for this drop.

Advocates of a balanced budget amendment have some good responses to these points. They explain that it’s right to push good policy, regardless of the political situation. Since I’m a strong advocate for a flat tax even though it isn’t likely to happen, I can’t argue with this logic.

Regarding the last two points, advocates explain that older versions of a balanced budget requirement simply required a supermajority for more debt, but newer versions also include a supermajority requirement to raise taxes. This means – at least indirectly – that the amendment actually is a vehicle for spending restraint.

This doesn’t solve the political challenge, but it’s why advocates of limited government need to be completely unified in favor of tax-limitation language in a balanced budget amendment. And they may want to consider being more explicit that the real goal is to restrain spending so that government grows slower than the productive sector of the economy.

Interestingly, even the International Monetary Fund (which is normally a source of bad analysis) understands that spending limits work better than rules that focus on deficits and debt.

Here are some of the findings from a new IMF study that looks at the dismal performance of the European Union’s Stability and Growth Pact. The SGP supposedly limited deficits to 3 percent of GDP and debt to 60 percent of GDP, but the requirement failed largely because politicians couldn’t resist the temptation to spend more in years when revenue grew rapidly.

An analysis of stability programs during 1999–2007 suggests that actual expenditure growth in euro area countries often exceeded the planned pace, in particular when there were unanticipated revenue increases. Countries were simply unable to save the extra revenues and build up fiscal buffers. …This reveals an important asymmetry: governments were often unable to preserve revenue windfalls and faced difficulties in restraining their expenditure in response to revenue shortfalls when consolidation was needed. …The 3 percent of GDP nominal deficit ceiling did not prevent countries from spending their revenue windfalls in the mid-2000s. … Under the SGP, noncompliance has been the rule rather than the exception. …The drawbacks of the nominal deficit ceiling are particularly apparent when the economy is booming, as it is compatible with very large structural deficits.

The good news is that the SGP has been modified and now (at least theoretically) requires spending restraint.

The initial Pact only included three supranational rules… As of 2014, fiscal aggregates are tied by an intricate set of constraints…government spending (net of new revenue measures) is constrained to grow in line with trend GDP. …the expenditure growth ceiling may seem the most appealing. This indicator is tractable (directly constraining the budget), easy to communicate to the public, and conceptually sound… Based on simulations, Debrun and others (2008) show that an expenditure growth rule with a debt feedback ensures a better convergence towards the debt objective, while allowing greater flexibility in response to shocks. IMF (2012) demonstrates the good performance of the expenditure growth ceiling

This modified system presumably will lead to better (or less worse) policy in the future, though it’s unclear whether various nations will abide by the new EU rules.

One problem is that the overall system of fiscal rules has become rather complicated, as illustrated by this image from the IMF study. 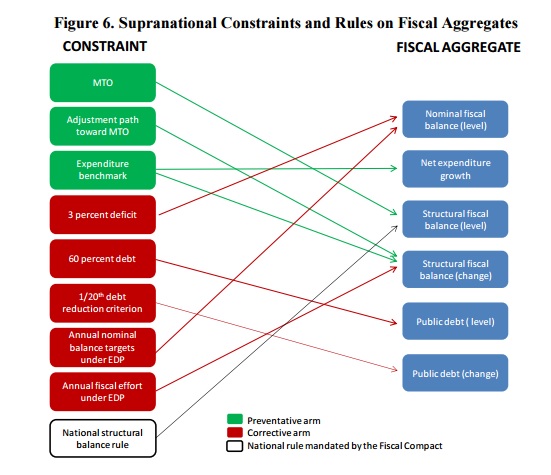 Which brings us back to the third point above. If the goal is to restrain spending (and it should be), then why set up a complicated system that first and foremost is focused on red ink?

That’s why the Swiss Debt Brake is the right model for how to get spending under control. And this video explains why the objective should be spending restraint rather than deficit reduction.

And for those who fixate on red ink, it’s worth noting that if you deal with the underlying disease of too much government, you quickly solve the symptom of deficits.
[mybooktable book=”global-tax-revolution-the-rise-of-tax-competition-and-the-battle-to-defend-it” display=”summary” buybutton_shadowbox=”true”]