HomePolicyEconomic Lessons from the Nordic Countries 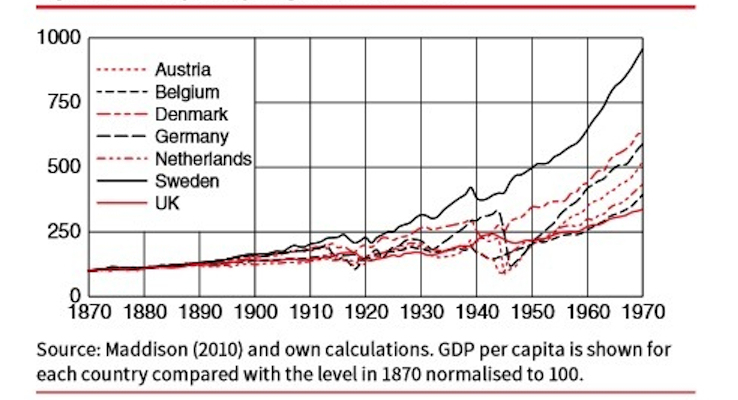 Folks on the left sometimes act as if the Nordic nations somehow prove that big government isn’t an impediment to prosperity. As I’ve pointed out before, they obviously don’t spend much time looking at the data.

So let’s give them a reminder. Here are the rankings from Economic Freedom of the World. I’ve inserted red arrows to draw attention to the Nordic nations. As you can see, every single one of them is in the top quartile, meaning that they aren’t big-government jurisdictions by world standards.

Moreover, Finland ranks above the United States. Denmark is higher than Estonia, which is often cited a free-market success story. And all of them rank ahead of Slovakia, which also is known for pro-growth reforms.

To be sure, this doesn’t mean the Nordic nations are libertarian paradises. Far from it.

Which is tragic since the burden of government spending in North America and Western Europe used to be just a fraction of current levels – even in nations such as Sweden.

The way I’ve described the Nordic nations is that they have bloated and costly welfare states but compensate for that bad policy by being very free market in other policy areas.

But you don’t need to believe me. Nima Sanandaji has just written an excellent new monograph for the Institute of Economic Affairs in London. Entitled Scandinavian Unexceptionalism: Culture, Markets and the Failure of Third-Way Socialism, Nima’s work explains how the Nordic nations became rich during an era of small government and free markets, how they then veered in the wrong direction, but are now trying to restore more economic freedom.

Here are some key excerpts, starting with some much-needed economic history.

Scandinavia’s success story predated the welfare state. …As late as 1960, tax revenues in the Nordic nations ranged between 25 per cent of GDP in Denmark to 32 per cent in Norway – similar to other developed countries. …Scandinavia’s more equal societies also developed well before the welfare states expanded. Income inequality reduced dramatically during the last three decades of the 19th century and during the first half of the 20th century. Indeed, most of the shift towards greater equality happened before the introduction of a large public sector and high taxes. …The phenomenal national income growth in the Nordic nations occurred before the rise of large welfare states. The rise in living standards was made possible when cultures based on social cohesion, high levels of trust and strong work ethics were combined with free markets and low taxes….the Nordic success story reinforces the idea that business-friendly and small-government-oriented policies can promote growth.

Here’s a chart from the book showing remarkable growth for Sweden and Denmark in the pre-welfare state era.

Source: Maddison (2010)/Daniel Mitchell. GDP per capita is shown for each country compared with levels in 1870 normalized to 100.

Nima has extra details about his home country of Sweden.

In the hundred years following the market liberalisation of the late 19th century and the onset of industrialisation, Sweden experienced phenomenal economic growth (Maddison 1982). Famous Swedish companies such as IKEA, Volvo, Tetra Pak, H&M, Ericsson and Alfa Laval were all founded during this period, and were aided by business-friendly economic policies and low taxes.

Unfortunately, Nordic nations veered to the left in the late 1960s and early 1970s. And, not surprisingly, that’s when growth began to deteriorate.

The third-way radical social democratic era in Scandinavia, much admired by the left, only lasted from the early 1970s to the early 1990s. The rate of business formation during the third-way era was dreadful.

Again, he has additional details about Sweden.

Sweden’s wealth creation slowed down following the transition to a high tax burden and a large public sector. …As late as 1975 Sweden was ranked as the 4th richest nation in the world according to OECD measures….the policy shift that occurred dramatically slowed down the growth rate. Sweden dropped to 13th place in the mid 1990s. …It is interesting that the left rarely discusses this calamitous Swedish growth performance from 1970 to 2000.

The good news is that Nordic nations have begun to shift back toward market-oriented policies. Some of them have reduced the burden of government spending. All of them have lowered tax rates, particularly on business and investment income. And there have even been some welfare reforms.

…there has been a tentative return to free markets. In education in Sweden, parental choice has been promoted. There has also been reform to pensions systems, sickness benefits and labour market regulations

But there’s no question that the welfare state and its concomitant tax burden are still the biggest problem in the region. Which  is why it is critical that Nordic nations maintain pro-market policies on regulation, trade, monetary policy, rule of law and property rights.

Scandinavian countries have compensated for a large public sector by increasing economic liberty in other areas. During recent decades, Nordic nations have implemented major market liberalisations to compensate for the growth-inhibiting effects of taxes and labour market policies.

Let’s close with what I consider to be the strongest evidence from Nima’s publication. He shows that Scandinavians who emigrated to America are considerably richer than their counterparts who stayed put.

In other words, when you do apples to apples comparisons, either of peoples or nations, you find that smaller government and free markets lead to more prosperity.

That’s the real lesson from the Nordic nations.

P.S. Just in case readers think I’m being too favorable to the Nordic nations, rest assured that I’m very critical of the bad policies in these nations.

Just look at what I’ve written, for instance, about Sweden’s healthcare system or Denmark’s dependency problem.

But I will give praise when any nation, from any part of the world, takes steps in the right direction.