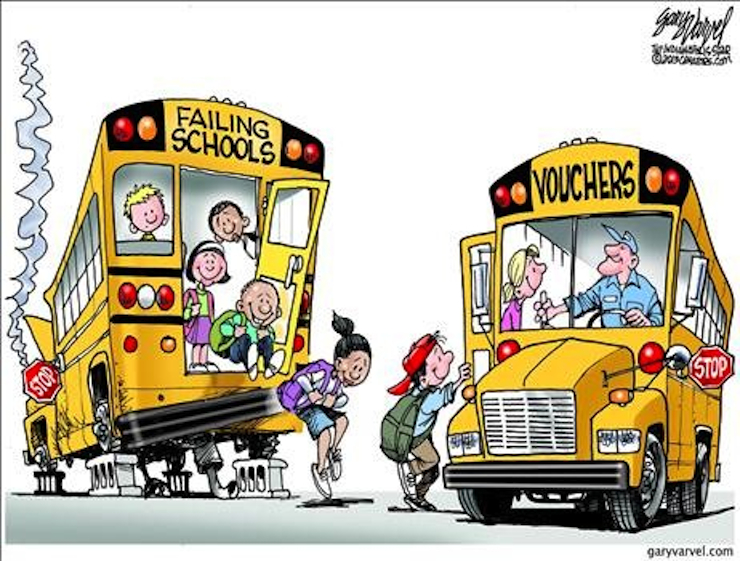 Our friends who believe in big government have this funny habit of self-exempting themselves from the bad policies that they impose on the rest of the population.

Statists are very opposed to so-called tax havens, for instance, because they don’t want there to be any constraints on the ability of governments to impose higher tax burdens. Yet it’s quite common to discover that these folks who want higher taxes for you and me have decided to protect their income and assets by utilizing low-tax jurisdictions.

Another example is that leftists are big advocates of one-size-fits-all, substandard government schools and they vociferously fight against school choice proposals that would help low-income families obtain better opportunities for their kids.

Yet these fans of monopoly government schools routinely make sure their children are in private schools. President Obama is the most high-profile example of this form of hypocrisy.

And so is his Secretary of Education.

The Wall Street Journal opines on this example of rank hypocrisy.

Arne Duncan…the Education Secretary continues to fight vouchers for private schools. So it’s worth noting that he has decided to send his own children to a private school in Chicago. …where tuition runs about $30,000 a year. That’s also where Barack and Michelle Obama sent their children before moving to Washington and sending Sasha and Malia to the tony Sidwell Friends. Mr. Duncan’s choice is all the more striking since he used to run the Chicago public schools.

I suppose you have to give Duncan credit for wanting good things for his kids, and he obviously had first-hand knowledge that the government schools in Chicago aren’t very good.

What’s nauseating, though, is how he doesn’t want poor families to have similar options.

He…stood aside in 2009 when Illinois Sen. Dick Durbin managed to kill the Opportunity Scholarship Program in Washington until Speaker John Boehner and the Republican Congress revived it. The Education Secretary was also a muted voice when the Obama Justice Department filed a lawsuit aimed at scuttling Louisiana’s innovative voucher program. And he was silent again when the Colorado Supreme Court recently invoked a leftover of 19th-century bigotry—its anti-Catholic Blaine amendment—to stop students from receiving vouchers for private schools.

By the way, you probably won’t be surprised to learn that another prominent Chicago leftist also has rejected government schools for his own children.

Here are some blurbs from a 2011 report in the Washington Post.

Chicago Mayor Rahm Emanuel…has decided to send his children to a private school… Emanuel…served in the White House as President Obama’s chief of staff… The decision where to send your children to school is certainly a personal one, even for public officials. But it is worth publicly noting what public officials…choose to do with their own children when given the chance.

What’s really worth publicly noting is that these politicians don’t want other families to have any escape options from failed government schools.

That’s what makes them hypocrites.

Even more important, that’s what makes them immoral. Sort of like modern-day equivalents of George Wallace, standing in the schoolhouse door to deny opportunity to the less fortunate.

And why do politicians behave so reprehensibly? For the simple reason that they want to curry favor with the unions that represent teachers.

Which makes this excerpt from a Chicago Tribune story especially remarkable. It seems that teachers from Chicago’s government schools also want better options for their own kids.

…a Thomas B. Fordham Institute study found that 39 percent of CPS teachers sent their own kids to private schools.

P.S. On the issue of government schools, I suppose we can paraphrase Winston Churchill and note that never have so many paid so much to achieve so little.

P.P.S. There’s also a strong argument that government schools are a form of child abuse because of bizarre political correctness.

P.P.P.S. Shifting from the immoral to the inane, I probably shouldn’t move to Pennsylvania. At least not if I want to keep my current license plate.

Why? Because bureaucrats in the Keystone State are on the lookout for plates with…gasp!…anti-government messages.

In addition to outright vulgarity and racism, some states prohibit messages on vanity license plates that can be viewed as “anti-government.” In Pennsylvania, for example, where five state employees in Harrisburg get to decide what’s allowed on vanity plates…“ENDFED,” a reference to libertarian-led efforts to shut down the Federal Reserve Bank, is…on the do-not-license list.

I’m not sure why expressing an opinion on monetary policy is considered vulgar or offensive.

But if that’s what Pennsylvania bureaucrats think, then I hope they don’t know about my video on the Federal Reserve. Between that and my seditious license plate, they’d probably arrest me just for simply driving through the state!

A Five-Picture Explanation of the Greek Mess