Why are many developed nations facing long-run fiscal crisis according to long-run estimates from the IMF, BIS, and OECD? Poorly designed entitlement programs are a big part of the answer, with the United States being an unfortunate example of how fiscal systems become unstable when politicians buy votes by putting burdens on future taxpayers.

But changing demographics is an equally important part of the answer. 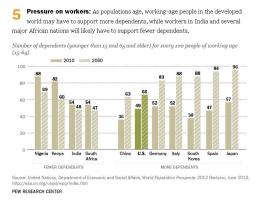 Simply stated, birth rates are falling and lifespans are increasing all over the world. Those aren’t bad things. Indeed, longer lifespans are a very good thing. But it means there won’t be enough workers to finance the modern welfare state. And when there are too many people riding in the wagon and too few people pulling the wagon, that is a recipe for Greek-style fiscal chaos.

When I explain this to audiences, I get the feeling that some folks think I’m exaggerating.

Indeed, some people openly accuse me of exaggerating demographic changes as part of a “scare campaign.”

They’re partially correct. My warnings about the need for reform could be considered a “scare campaign.” But that’s because I am scared. And I’m definitely not exaggerating.

Check out this very sobering image of how America’s population pyramid is turning into a population cylinder. Heck, our population profile will be somewhat akin to an upside-down pyramid by the middle of the century!

I have two thoughts when looking at this data.

The first – and most obvious – reaction is that we better implement genuine entitlement reform if we want to avoid a big mess. And the sooner, the better.

My second reaction is to express some sympathy and understanding (thought not approval) for the politicians who created America’s entitlement crisis.

Social Security was created in the mid-1930s and Medicare and Medicaid were adopted in the mid-1960s. And if you pay close attention to the above image, you’ll see that America had a “population pyramid” during those periods, 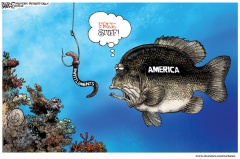 meaning that there were comparatively few old people, plenty of workers, and then even larger generations of children (i.e., future workers and taxpayers).

With that type of population profile, tax-and-transfer entitlement systems appeared to be financially sustainable. That didn’t mean those programs were a good idea, of course, but it did mean that politicians could plausibly argue that it was okay to create entitlement programs that resembled Ponzi schemes.

The bottom line is that FDR and LBJ were very misguided, but their mistakes look far worse today than they did at the time.

So now the question is whether today’s politicians will show some actual foresight and fix the problems. There are reasons for optimism, but also reasons for pessimism.

P.S. Demography is not destiny. As I wrote earlier this year, “…there are jurisdictions, such as Singapore and Hong Kong that are in reasonably good shape even though their populations rank among the nations with the lowest levels of fertility and longest life expectancies. …Mandatory pension savings is a key reason why some jurisdictions have mitigated a demographic death squeeze.“

P.P.S. My 11th-most viewed article of all time (and the most-viewed item in the past three months) used two cows to explain economic and political theories.

Here’s an addendum to that article.

For more Greek-related humor, this cartoon is quite  good, but this this one is my favorite. And the final cartoon in this post also has a Greek theme.

Last but not least, here are some rather un-PC maps of how various peoples – including the Greeks – view different European nations.

A Very Simple Plan to Balance the Budget by 2021

The Foreign Edition of Great Moments in Government