HomePolicyGet the Federal Government, Michelle Obama Out of Our Stomachs

Get the Federal Government, Michelle Obama Out of Our Stomachs 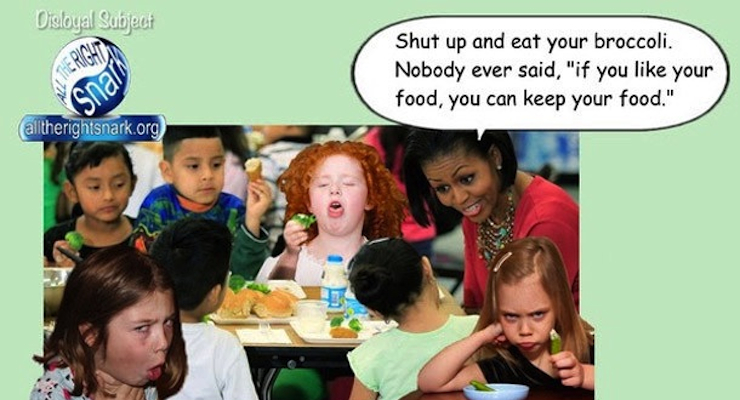 Back in 2010, I joked that the Libertarian Party should give Barack Obama a Man-of-the-Year Award because his failed policies rejuvenated interest in limits of federal power. Though, in retrospect, perhaps the GOP should have given Obama the Award since Republicans reaped the short-term benefits.

In any event, let’s not get distracted by electoral politics. That’s because we have another tongue-in-cheek award. It’s time for the Libertarian Party to give its Woman-of-the-Year Award to Michelle Obama.

Why? Because the First Lady has single-handedly managed to discredit the federal government’s program to subsidize school lunches. In short, there are now all sorts of federal regulations and mandates that have simultaneously made the program most costly for schools and resulted in food that is less appealing to students.

In other words, she’s helping to teach the next generation that big government makes your life less pleasant. That’s usually a lesson young people don’t learn until they get their first paycheck. Let’s look at the results of Ms. Obama’s handiwork.

Citing a report from the Government Accountability Office, the Wall Street Journal opines on how Washington has made the school lunch program become far less appealing.

America’s youth are voting with their forks: …participation has plunged for the second year in a row by 1.4 million children, or 4.5%, as they flee inedible government-designed cuisine. …In the name of better eating habits, the USDA has published 141 memos with mandates reaching down to quotas across “vegetable subgroups” and bans on salt and sandwiches. …this cookbook…runs to some 4,700 pages and counting… GAO auditors toured 14 schools in eight states for an on-site look at how kids and cafeterias are responding, and they report that the regulatory deluge is “overwhelming.”

Though I’m glad to see that some local governments and students are engaging in civil disobedience.

“…two had nevertheless been serving pasta that was not in compliance with the whole grain-rich requirement.” …The auditors found students in two schools who carried contraband salt shakers.

Gasp! Non-compliant pasta and contraband salt?!? Surely it’s time to sic the IRS on these scofflaws.

Or maybe we should learn a different lesson, which the WSJ succinctly identifies.

This exercise has been an epic waste of food and taxpayer money.

Some statist readers doubtlessly are saying that the higher cost is worthwhile because students (even if they don’t like it) are being forced to eat healthier.

Amazingly, the federal government managed to decrease consumption of fruits and vegetables (FV) even though that’s one of the main goals of the new rules. Here’s an excerpt from a scholarly study.

As reported by the Washington Examiner, even the School Nutrition Association is not exactly happy with the federal government’s nanny-state approach to school lunches.

Schools nationwide are being forced to raid their education budgets to cover the costs of federally-mandated school lunches, rejected by students because they taste bad, according to a group the represents school nutrition professionals. Once a profit center for schools, cafeterias have become a financial black hole… And the deficits are being made up by cafeteria worker firings and budget shifting, according to the School Nutrition Association.

The Washington Examiner story represents an interesting development since it’s a sign of a schism between two interest groups – government workers and nanny staters – that normally are part of the same coalition.

So further kudos to Ms. Obama for causing discord on the left.

Though when push comes to shove, the nanny staters lose.

Here’s a real-world example of how the federal government has botched the program. A Montana school board has decided it makes more sense to reject handouts from Uncle Sam.

Bozeman school board members voted 5-3 to pull the high school out of the National School Lunch Program because federal regulations on calories, fat, sugar, sodium, whole grains and other nutritional elements championed by the first lady were driving students off campus for lunch… School officials realized it was financially advantageous to forgo $117,000 in federal food subsidies tied to the National School Lunch Program to draw students back into the cafeteria, and it seems they were correct. …Across the district, the food service program is $1,441 in the black so far for the 2015-16 school year. The food service budget ended last school year $16,000 in the red… And school food service workers told board members students are now getting high quality food from local sources, rather than pre-packaged meals promoted by the government.

Let’s now shift gears and look at other ways the federal government screws up when it gets involved with what goes in our stomachs.

For years, bureaucrats in Washington have tried to tell all of us, not just students, what we should eat and drink.

Well, it turns out that they were giving us bum advice. Here are a few excerpts from some analysis in the Washington Post.

Was this advice helpful?

Not so much. At least if the goal is better health.

…research published in recent years indicates that the opposite might be true: millions might have been better off had they stuck with whole milk. Scientists who tallied diet and health records for several thousand patients over ten years found, for example, that contrary to the government advice, people who consumed more milk fat hadlower incidence of heart disease.

By the way, it’s not just whole milk. One of my Cato colleagues, Walter Olson, points out that the government has a long track record of botching recommendations.

Previous advice from Washington about the supposed hazards of eggs and other cholesterol-laden foods, the advantages of replacing butter and other animal fats with trans fats, and the gains to be made from switching from regular to diet soda, have all had to be re-evaluated and sometimes reversed in later years.

So what lessons should we learn?

Let’s turn to David Boaz, another colleague from the Cato Institute. He succinctly explains that government shouldn’t be involved in our diets.

It’s understandable that some scientific studies turn out to be wrong. Science is a process of trial and error, hypothesis and testing. Some studies are bad, some turn out to have missed complicating factors, some just point in the wrong direction. I have no criticism of scientists’ efforts to find evidence about good nutrition and to report what they (think they) have learned. My concern is that we not use government coercion to tip the scales either in research or in actual bans and mandates and Official Science. Let scientists conduct research, let other scientists examine it, let journalists report it, let doctors give us advice. But let’s keep nutrition – and much else – in the realm of persuasion, not force. First, because it’s wrong to use force against peaceful people, and second, because we might be wrong. This last point reflects the humility that is an essential part of the libertarian worldview.

Let’s close with one final example to demonstrate the bad things that happen when the federal government gets involved with food.

Writing for the Foundation for Economic Education, my old buddy Jim Bovard explains how biased bureaucrats are deliberately exaggerating hunger in America.

The Agriculture Department announced this morning that 48 million Americans live in “food insecure” households. Soon you’ll hear we’re suffering an epidemic of hunger. While the federal government is already feeding more than 100 million Americans, we’ll be told that it just isn’t enough. But it isn’t true. “Food insecurity” is a statistic designed to mislead. USDA defines food insecurity as being “uncertain of having, or unable to acquire, enough food to meet the needs of all their members because they had insufficient money or other resources for food.”

But this doesn’t mean anyone is going without food, as Jim notes.

After the 2009 USDA food security report was released, President Obama announced that “hunger rose significantly last year. … My administration is committed to reversing the trend of rising hunger.” …USDA food security reports, by creating the illusion of a national hunger epidemic, have helped propel a vast increase in federal food aid in recent years. …The insecurity = hunger switcheroo is also fueling campaigns to compel schools to give free breakfasts to all kids after school starts each day. …USDA has never attempted to create an accurate gauge to measure actual hunger. Instead, citizens are supposed to be satisfied with federal reports that are little more than a subsidy for political grandstanding.

I know what lesson I hope people learn from the deceit, waste, and foolishness discussed today. We should end any role for the federal government in food. That means ending all the misguided programs discussed above. It also means abolishing the food stamp program and letting states decide whether such subsidies are desirable. And it means shutting down the entire Department of Agriculture.

Like all sensible libertarians, I don’t like the idea of having the federal government in my wallet or my bedroom. Perhaps we also need to say we don’t want Washington in our stomachs either.

What Lessons Can America Learn from Europe?