What Lessons Can America Learn from Europe?

Democrat presidential candidates arrive on the stage at the debate sponsored by CNN and Facebook at Wynn Las Vegas on October 13, 2015 in Las Vegas, Nevada.

Some issues never seem to get resolved. One would think, for instance, that leftists would be more cautious about pushing for a bigger welfare state given the fiscal crisis in Europe.

such as Denmark and Sweden. To give some credit to the Vermont Senator, he’s at least smart enough to pick Scandinavian nations that compensate for the damaging impact of high taxes and excessive spending by being very market-oriented in all other respects.

Though I suspect he’d be horrified to know that he’s basically endorsing a laissez-faire approach to policies such as trade and regulation. But let’s set aside the quirky candidacy of Bernie Sanders and focus on whether the United States, as a general rule, should be more like Europe.

To be sure, this is a very imprecise way to look at the issue since “Europe” includes very market-oriented countries such as Switzerland and the United Kingdom (both of which rank above the United States for overall economic freedom) as well as very statist nations such as Italy, France, and Greece.

But if you take the average of European nations, there’s no question that the continent would be further to the left than America on the statism spectrum.

So, we should be able to learn some lessons by making general comparisons.

Let’s go to the other side of the world to get some insight on this issue. Oliver Hartwich is an economist with the New Zealand Initiative, and he looks at the negative consequences of the welfare state in his new publication, Why Europe Failed. He starts by sharing the grim data on how the burden of government spending has increased.

And here’s the Table he referenced.

Very similar to the data I shared back in 2013 for the simple reason that we’re both citing the superb work of Vito Tanzi. Oliver adds some analysis, noting that Europe’s voters have sold themselves into dependency.

Bread and circuses – or panem et circenses in the Latin original – were the means of bribing the masses in ancient Rome. Modern Europe is witnessing a similar phenomenon. …Unfortunately, it is often overlooked that government can only bribe the people with their own money. …Buying European citizens’ loyalty for their mixed economy welfare states has effectively enslaved them.

…we have to make sure we do not repeat Europe’s mistakes. …be watchful of the rise of the welfare state. In Europe, the welfare state was a means of buying political power. Of course, the bribed electorate always paid for its own bribes. However, the arrangement worked for as long as new spending commitments could be financed through higher taxes, more debt, or indeed a combination of both. As government spending has now reached around 50% of GDP, and as the debt load stands at worrying levels, the European welfare state model has reached its limits. … we have the luxury of being three or four decades behind Europe’s demography curve. But this does not have to mean that we will be experiencing Europe’s problems 30 or 40 years later. It should mean that we have 30 or 40 years of finding ways to prevent a European replay by finding different answers to the challenges facing Europe today.

Here’s a short video of Hartwich discussing his work and its implications.

Now let’s look at another source of information. And we’ll actually deal with an argument being peddled by Bernie Sanders. In an article for the Mises Institute, Ryan McMaken looks at the assertion that the United States has the highest poverty rate in the developed world.

Bernie Sanders claimed that the United States has the highest rate of childhood poverty. …UNICEF…is probably the source of Sanders’s factoid… Sanders probably doesn’t even know what he means by “major country”.

Though maybe the OECD is the source of Senator Sanders’ data. After all, as Ryan explains, some organizations are completely dishonest in that their supposed poverty data actually measures income distribution rather than poverty.

McMaken then crunches the data to see what actually happens if you compare the poverty level of income in the United States to overall income in other industrialized nations.

So what’s the bottom line from this data?

The answer is that it’s better to be a “poor” person in the United States than an average person in many European nations.

…a person at 60% of median  income in the US still has a larger income than the median household in Chile, Czech Rep., Greece, Hungary, Portugal, and several others. And the poverty income in the US is very close to matching the median income in Italy, Japan, Spain, and the UK.

In other words, Bernie Sanders is wrong, UNICEF is wrong, and the OECD is wrong.

Poverty in the United States is not high.

Indeed, experts who have looked at actual measures of deprivation have concluded that the real poverty rate in the United States is relatively low. Even when compared with the more market-oriented countries in Northern Europe.

Last but not least, let’s look at one more Europe-America comparison, just in case the aforementioned data wasn’t sufficiently compelling. Check out this map showing how many young adults still live with their parents (h/t: Paul Kirby). 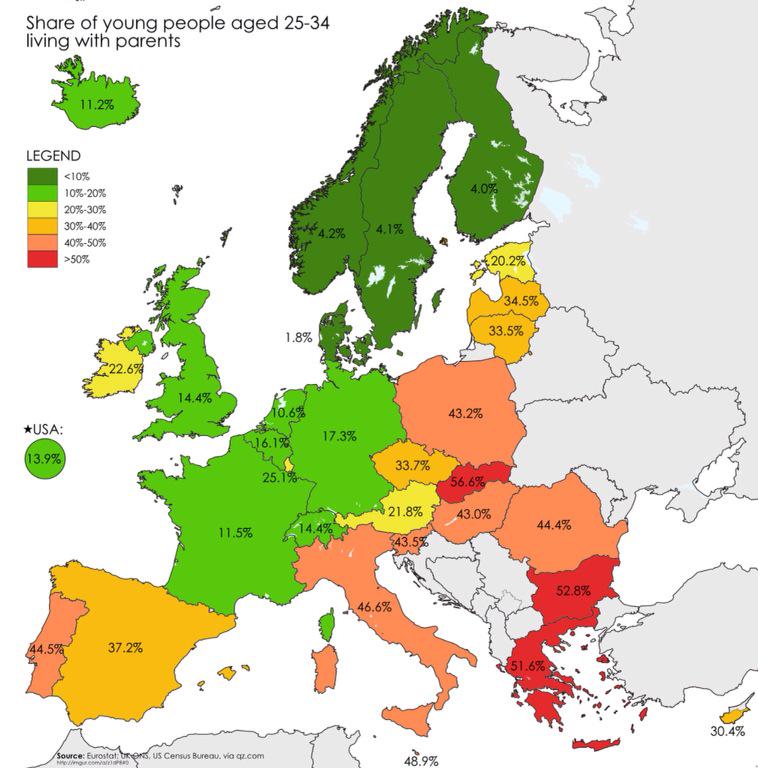 But for purposes of today’s analysis, our message is more basic. Simply stated, the United States should not be more like Europe. Instead, we should seek to be more like Hong Kong and Singapore.

Assuming, of course, that the goal is to have policies that promote prosperity.

Get the Federal Government, Michelle Obama Out of Our Stomachs

A Much-Needed Economics, Math, and Logic Lesson for the New York Times