In my speeches, I routinely argue that an aging population is one of the reasons why we need genuine entitlement reform. A modest-sized welfare state may be feasible if a country has a “population pyramid,” I explain, but it’s a recipe for fiscal chaos when changing demographics result in fewer and fewer people pulling the wagon and more and more people riding in the wagon.

And if you somehow doubt that’s what is happening in America, check out this very sobering image showing that America’s population pyramid is turning into a population cylinder. 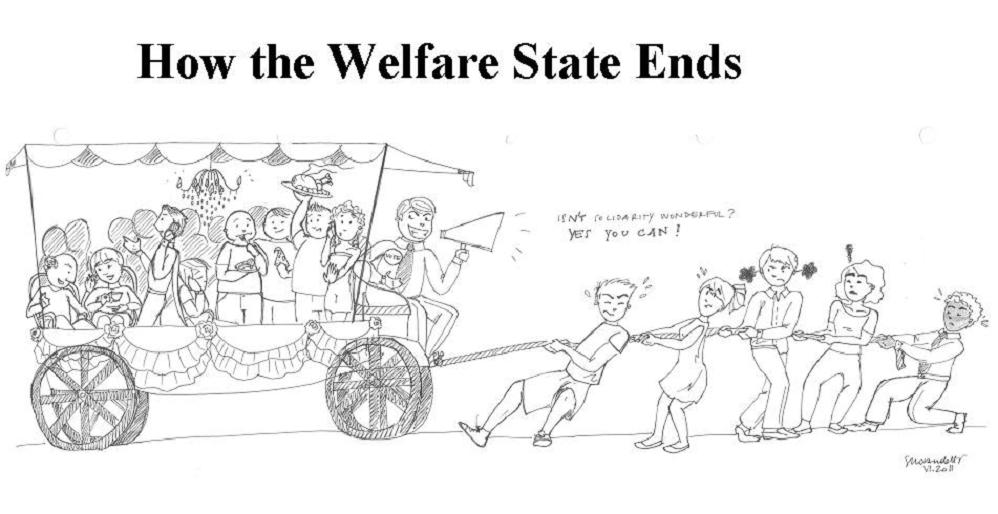 The bottom line is that demographics and entitlements will mean a Greek fiscal future for America and other nations. To bolster my case (particularly for folks who might be skeptical of a libertarian message), I frequently cite pessimistic long-run fiscal data from international bureaucracies such as the IMF, BIS, and OECD.

I’m not a big fan of these organizations because they routinely endorse statist policies, but I figure skeptics will be more likely to listen to me if I point out that even left-leaning international bureaucracies agree the public sector is getting too large.

And now I have more evidence to cite. A new report from the International Monetary Fund explores “The Fiscal Consequences of Shrinking Populations.” Here’s what you need to know.

Declining fertility and increasing longevity will lead to a slower-growing, older world population. …For the world, the share of the population older than age 65 could increase from 12 percent today to 38 percent by 2100. …These developments would place public finances of countries under pressure, through two channels. First, spending on age-related programs (pensions and health) would rise. Without further reforms, these outlays would increase by 9 percentage points of GDP and 11 percentage points of GDP in more and less developed countries, respectively, between now and 2100. The fiscal consequences are potentially dire…large tax increases that could stymie economic growth.

Let’s now look at a couple of charts from the study.

The one of the left shows that one-third of developed nations already have negative population growth, and that number will jump to about 60 percent by 2050. And because that means fewer workers to support more old people, the chart on the right shows how the dependency ratio will worsen over time.

So what do these demographic changes mean for fiscal policy?

Well, if you live in a sensible jurisdiction such as Hong Kong or Singapore, there’s not much impact, even though birthrates are very low, because government is small and people basically are responsible for setting aside income for their retirement years.

And if live in a semi-sensible jurisdiction such as Australia or Chile, the impact is modest because personal retirement accounts preclude Social Security-type fiscal challenges.

But if you live just about anywhere else, in places where government somehow is supposed to provide pensions and health care, the situation is very grim.

Here’s another chart from the new IMF report. If you look at developed nations, you can see a big increase in the projected burden of government spending, mostly because of rising expenditures for health care.

At this stage, I can’t resist pointing out that this is one reason why the enactment of Obamacare was a spectacularly irresponsible decision.

But let’s not get sidetracked.

They look at increased migration, but at best that’s a beggar-thy-neighbor approach. They look at increased labor force participation, which would be a very good development, but it’s hard to see that happening when nations have redistribution policies that discourage people from being in the workforce.

And the report is very skeptical about the prospects of government-induced increases in birthrates.

Boosting birth rates could slow down population aging and gradually reduce fiscal pressures. …However, a “birth rate” solution to aging is unlikely to work for most countries. The pronatalist policies seem to have only modest effects on the number of births, although they might affect the timing of births.

So that means the problem will need to be addressed through fiscal policy.

The IMF’s proposed solutions include some misguided policies, but I was surprisingly pleased by the recognition that steps were needed to limit the growth of government.

Regarding pensions, the IMF suggested higher retirement ages, which is a second-best option, while also suggesting private retirement savings, which is the ideal solution.

Reforming public pension systems can help offset the effects of aging. Raising retirement ages is an especially attractive option… For example, raising retirement ages over 2015–2100 by an additional five years (about 7 months per decade) beyond what is already legislated would reduce pension spending by about 2 percentage points of GDP by 2100 (relative to the baseline) in both the more and less developed countries. …increasing the role of private retirement saving schemes could be helpful in offsetting the potential decline in lifetime retirement income.

But if you recall from above, the biggest problem is rising health care costs.

And kudos to the IMF for supporting market-driven competition. Even more important, though, the international bureaucracy recognizes that the key is to limit the government’s health care spending to the growth of the private economy (sort of a a healthcare version of Mitchell’s Golden Rule).

…health care reform can be effective in containing the growth of public health spending. …There is past success in improving health outcomes without raising costs through promoting some degree of competition among insurers and service providers. …Containing the growing costs of health care would help reduce long-term fiscal risks. On average, health care costs are projected to increase faster than economic growth. …Assuming policies are able to keep the growth of health care costs per capita in line with GDP per capita, health care spending will increase at a slower rate, reflecting only demographics. Under this scenario, public health care spending pressures would be greatly subdued: by 2100, health spending would be reduced by 4½ percentage points of GDP in the more developed countries.

Interestingly, of all the options examined by the IMF, capping the growth of health care spending had the biggest positive impact on long-run government spending.

So what lessons can we learn?

Most important, the IMF study underscores the importance of the Medicaid reform and Medicare reform proposals that have been included in recent budgets on Capitol Hill.

In addition to making necessary structural changes, both of these reforms cap the annual growth of health care spending, which is precisely what the IMF report says will generate the largest savings.

So we’re actually in a very unusual situation. Some lawmakers want to do the right thing for the right reason at the right time.

But not all of them. Some politicians, either because of malice or ignorance, think we should do nothing, even though that will mean a very unpleasant future.

Ted Cruz Tax Plan: Inside the Pro-Growth Restructuring of the Internal Revenue Code