Three years ago, I shared a chart about the fiscal burden of the welfare state, calling it the picture that says a thousand word.

It’s astounding, after all, that taxpayers spend so much money on means-tested programs and get such miserable results. Indeed, if we took all the money spent on various welfare programs and added it up, it would amount to $60,000 for every poor household. 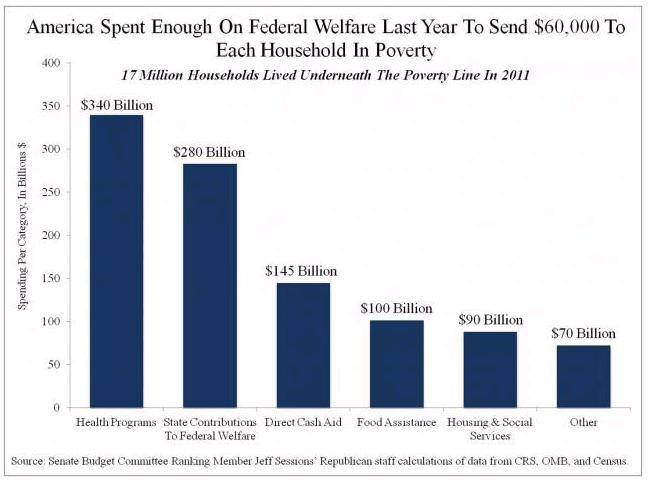 Yet the handouts for poor people generally (but not always) are way below that level, so where does all the money go?

Well, this eye-popping flowchart (click to enlarge) from the House Ways & Means Committee is one way of answering that question. As you can see, there are dozens of programs spread across several agencies and departments.

In other words, a huge chunk of anti-poverty spending gets absorbed by a bloated, jumbled, and overlapping bureaucracy (and this doesn’t even count the various bureaucracies in each state that also administer all these welfare programs).

This is akin to a spider web of dependency. No wonder people get trapped in poverty.

Fortunately, we have a very simple solution to this mess. Just get the federal government out of the business of redistributing income. We already got very good results by reforming one welfare program in the 1990s. So let’s build on that success.

P.S. Leftists generally will oppose good reforms, both because of their ideological belief in redistribution and also because overpaid bureaucrats (who would have to find honest work if we had real change) are a major part of their coalition. But there are some honest statists who admit the current system hurts poor people.

Instead of Fighting to Protect Taxpayers, Politicians Enable Medicare Fraud