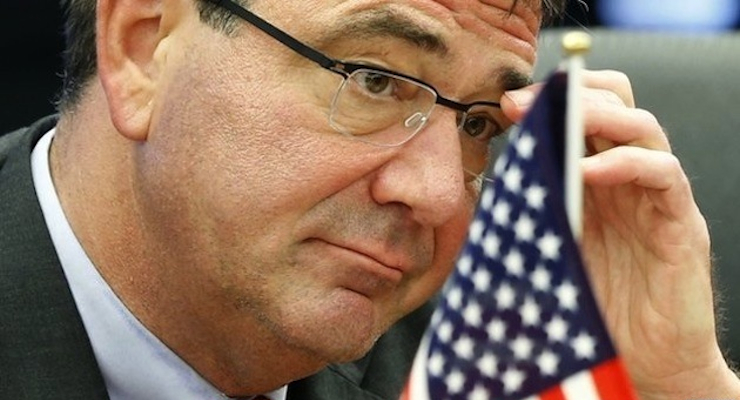 If you did a word-association test with people after describing jaw-dropping examples of government incompetence, you would probably get answers like “angry” or “wasteful.” Especially if you asked around April 15.

Though in some cases of spectacular and inexplicable ineptitude by government,

you reach a stage where the answers might even be “preposterous” or “comical.”

Unfortunately, today we’re going to look at an example of bone-headed government behavior that can only be described as “deadly.”

That’s because the New York Times just revealedthat there were very obvious red flags about one of the San Bernardino terrorists, yet federal bureaucrats apparently were too stupid, lazy, or incompetent to check sites such as Facebook and Twitter.

Tashfeen Malik, who with her husband carried out the massacre in San Bernardino, Calif., passed three background checks by American immigration officials as she moved to the United States from Pakistan. None uncovered what Ms. Malik had made little effort to hide — that she talked openly on social media about her views on violent jihad. She said she supported it. And she said she wanted to be a part of it. …The discovery of the old social media posts has exposed a significant — and perhaps inevitable — shortcoming in how foreigners are screened when they enter the United States, particularly as people everywhere disclose more about themselves online. …In an era when technology has given intelligence agencies seemingly limitless ability to collect information on people, it may seem surprising that a Facebook or Twitter post could go unnoticed in a background screening.

But you’ll be happy to know that the Keystone Cops in the bureaucracy are now contemplating whether to even look at the barn door now that we know the horses keep escaping.

…a debate is underway at United States Citizenship and Immigration Services, the agency that approves visas and green cards, over whether officers conducting interviews should be allowed to routinely use material gathered from social media for interviews where they assess whether foreigners are credible or pose any security risk.

What makes this story so aggravating is that national security is one of the few legitimate functions of the federal government.

Yet we get glaring examples of failure, perhaps because Washington has become so bloated that sensible management is increasingly difficult.

For another example of government incompetence in the area of national security, let’s go to the Middle East, where ABC News reported that a program to train supposedly moderate fighters in Syria achieved remarkable levels of inefficiency.

…only “four or five” of the first 54 U.S.trained moderate Syrian fighters remain in the fight against ISIS. …there are currently between 100 and 120 fighters in a program that was slated to have trained 5,400 fighters in its first 12 months. …So far, $42 million has been spent to develop the $500 million program which began training in April.

Wow. If my math is right, that’s about $10 million per fighter. I’m tempted to joke about getting fighters for a lot cheaper by placing an advertisement in Solider of Fortune.

But a more serious point is that  the fact that the program surely has been a huge success for the bureaucrats and contractors. After all, they got lots of taxpayer money, so who cares about actual results.

But the more serious point is why the US is involved in Syria in the first place? Writing for Reason, Steve Chapman argues for nonintervention and even makes the point that the U.S. should instead welcome Russia’s involvement.

Vladimir Putin…has sent Russian planes to bomb rebels in Syria. …he reaffirmed his commitment to Syrian President Bashar al-Assad. …Republicans regard this as a calamity. But what’s the downside? There are two main ways this gambit could go. …The first possibility is that he will inflict significant damage on Islamic State. In that case, one of our most vicious enemies would be weakened—at little cost or risk to Americans. The only thing better than defeating Islamic State is getting someone to do it for us. …The second possibility is that Putin will fail… He could find himself in a costly, bloody war. Or he might decide the prize is not worth the effort and pull back, which would dash his dreams of regional power and discredit him at home. Either way, he’s worse off, and we’re not.

Now let’s shift to a story that goes beyond routine government incompetence and deserves a special category.

Because when you read about military bureaucrats turning a blind eye to child rape in Afghanistan, words like “evil” and “soulless” are far more appropriate.

Rampant sexual abuse of children has long been a problem in Afghanistan, particularly among armed commanders who dominate much of the rural landscape and can bully the population. The practice is called bacha bazi, literally “boy play,” and American soldiers and Marines have been instructed not to intervene — in some cases, not even when their Afghan allies have abused boys on military bases, according to interviews and court records. …soldiers and Marines have been increasingly troubled that instead of weeding out pedophiles, the American military was arming them in some cases and placing them as the commanders of villages.

Unsurprisingly, as reported by the Washington Examiner, the Obama Administration is leading from behind.

Not exactly a proud moment for the United States.

To be sure, you have to make compromises with right and wrong during wartime. Heck, we were allies in World War II with one of the world’s most murderous and sinister regimes.

But surely we can disallow child rape on American military bases!

Let’s return to a more mundane example of bad policy, one that shows the U.S. government can waste money overseas just as effectively as it wastes money at home.

U.S. taxpayers footed the bill for a $43 million natural-gas filling station in Afghanistan, a boondoggle that should have cost $500,000 and has virtually no value to average Afghans… A Pentagon task force awarded a $3 million contract to build the station in Sheberghan, Afghanistan, but ended up spending $12 million in construction costs and $30 million in “overhead” between 2011 and 2014.

Wow. Reminds me of being in a meeting last decade and a representative of the Bush Administration was arguing that its nation-building exercise (I forget whether it was Iraq or Afghanistan) was going well because we had successfully built so many schools and sewer systems.

I was being a curmudgeonly libertarian and made myself unpopular by pointing out that I didn’t think it was the responsibility of the federal government to fund those projects in the United States, much less overseas.

Let’s end where we started, with an example of government incompetence that could have deadly consequences.

Hillary Clinton’s “reset” with Russia was a miserable failure and the United States increasingly is worried about Putin’s adventurism. Yet the federal government didn’t exercise sufficient oversight to make sure that citizens of a potential enemy didn’t get to work on classified computer code.

Doesn’t exactly leave one with a great feeling of confidence.

So there are two lessons from today.

First, politicians and bureaucrats and wasteful and incompetent, and that applies even in areas where there is a legitimate role for government.

Second, we’ll have a better chance of getting sensible and competent decisions if government is a lot smaller. After all, it will be a lot easier to have oversight when government is doing 100 things instead of 10,000 things.

There are some legitimate functions of government and I want those to be handled efficiently. But I worry that effective government is increasingly unlikely because politicians are so busy intervening in areas that should be left to families, civil society, and the private sector.

Mark Steyn made the same point in a much more amusing fashion. Which is why these cartoons are such a good depiction of government.

Evil, Knee-Jerk, Wingnut Libertarians and Conservatives Are Wrong to Say ObamaCare is a Total Job Killer

Politicians' Greed Once Again Thwarted by the Laffer Curve