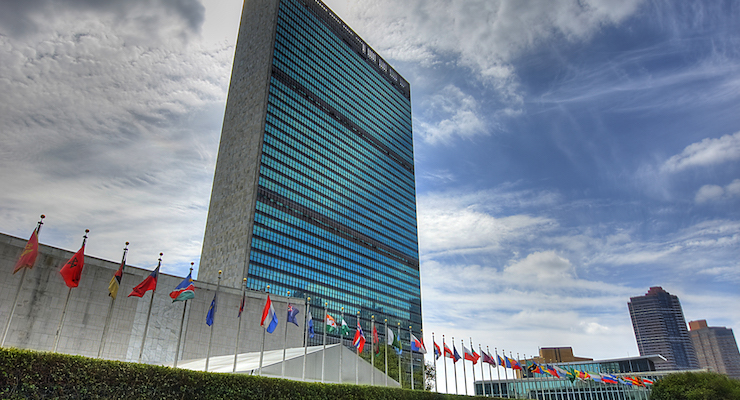 There are many reasons why I’m not a big fan of the United Nations. Like other international bureaucracies, it supports statist policies (higher taxes, gun control, regulation, etc) that hinder economic development and limit human liberty by increasing the burden of government

Some people tell me that I shouldn’t be too critical because the U.N. also helps poor people with foreign aid. Indeed, the U.N. has a very active project to encourage rich nations to contribute 0.7 percent of their economic output to developing nations.

I generally respond to these–in some cases–well-meaning folks by explaining that there’s a big difference between good intentions and good results. If you examine the evidence, it turns out that redistribution from rich nations to poor nations is just as counterproductive as redistribution within a society.

An article in The Economist succinctly summarizes the issue. It starts with the rationale for foreign aid.

After the second world war, a new “development economics” came to dominate policymaking…, often at the urging of international institutions such as the World Bank. It argued that poor countries were victims of a vicious circle of poverty… The answer? Rich countries should provide the capital, in the form of foreign aid. …poor-country governments should plan their economies and…competition should be restricted through monopoly rights and barriers to foreign trade.

It then describes the revolutionary thinking of the late Peter Thomas Bauer, a Hungarian-born British economist who said the developing world needed economic freedom rather than handouts.

Lord Bauer set out alternative theories that, from the 1950s to the 1970s, were heresy. …Opportunities for private profit, not government plans, held the key to development. Governments had the limited though crucial role of protecting property rights, enforcing contracts, treating everybody equally before the law, minimising inflation and keeping taxes low.

Moreover, Bauer explained that foreign aid generally had a negative effect because it put resources in the hands of government, thus leveraging more statism. Which is the last thing these nations needed.

Aid politicised economies, directing money into the hands of governments rather than towards profitable business. Interest groups then fought to control this money rather than engage in productive activity. Aid increased the patronage and power of the recipient governments, which often pursued policies that stifled entrepreneurship and market forces. Indeed, aid had proved “an excellent method for transferring money from poor people in rich countries to rich people in poor countries.”

Writing for the U.K.-based Spectator, Daron Acemoglu and James Robinson explain that foreign aid has a very poor track record.

The idea that large donations can remedy poverty has dominated the theory of economic development — and the thinking in many international aid agencies and governments — since the 1950s. And how have the results been? Not so good, actually. Millions have moved out of abject poverty around the world over the past six decades, but that has had little to do with foreign aid. Rather, it is due to economic growth in countries in Asia which received little aid.

Meanwhile, the nations getting the most handouts have remained mired in poverty.

In the meantime, more than a quarter of the countries in sub-Saharan Africa are poorer now than in 1960 — with no sign that foreign aid, however substantive, will end poverty there. …huge aid flows appear to have done little to change the development trajectories of poor countries… Why? …economic institutions that systematically block the incentives and opportunities of poor people to make things better for themselves, their neighbours and their country. …The problem is that their aspirations are blocked today…by extractive institutions. The poor don’t pull themselves out of poverty, because the basic ability to do so is denied them.

What exactly are “extractive institutions”?

At the top of the list would be bad government policy, which creates a system in which politicians, bureaucrats, and insiders get unearned wealth via corruption and cronyism.

The authors give some powerful examples.

To understand Syria’s enduring poverty, you could do worse than start with the richest man in Syria, Rami Makhlouf. He is the cousin of President Bashar al-Assad and controls a series of government-created monopolies. He is an example of what are known in Syria as ‘abna al-sulta’, ‘sons of power’. To understand Angola’s endemic poverty, consider its richest woman, Isabel dos Santos, billionaire daughter of the long-serving president. …every major Angolan investment held by dos Santos stems either from taking a chunk of a company that wants to do business in the country or from a stroke of the president’s pen that cut her into the action.

I’d also include the wealthy Venezuelans who have used socialism as a vehicle to enrich themselves while impoverishing ordinary people.

To be sure, we have examples of insider favoritism and undeserved wealth in rich nations, but it’s a matter of degree. Cronyism is an undesirable feature of our economy, but it’s a defining feature of nations in the developing world.

So what does all this mean?

When aid is given to governments that preside over extractive institutions, it can be at best irrelevant, at worst downright counter-productive. …Many kleptocratic dictators such as Congo’s Mobutu Sese Seko have been propped up by foreign aid.

Now let’s shift from looking at nations where failure has been subsidized by foreign aid and instead consider the success stories of economic development. Are there any lessons we can learn?

Well, if you look at the ranking from Economic Freedom of the World, you’ll see that the formerly poor East Asian jurisdictions that are now rich also have something else in common. They rank very high or somewhat high for economic freedom

In other words, there is a recipe for growth and prosperity. Nations that restrain the size of government and allow markets to flourish enjoy growth.

Which is exactly the message of this video.

By the way, you don’t need perfection to get climb out of poverty. China still doesn’t rank very high in Economic Freedom of the World, but it has improved its position over the past few decades and that has helped lift hundreds of millions of people out of abject poverty. Same with India.

Yes, both nations are capable of much stronger growth with further improvements in policy, but it’s nonetheless good news that there’s been considerable improvement.

Let’s address one more issue that arises in the debate about foreign aid.

Professor Noah Smith of Stony Brook University, in a column for Bloomberg, debunks the myth that poverty in the developing world is a legacy of colonialism.

…the stolen-wealth theory is wrong. Oh, it’s absolutely true that colonial powers stole natural resources from the lands they conquered. …the stolen-wealth theory is wrong…because the theory doesn’t explain the global distribution of income today. …The easiest way to see this is to observe all the rich countries that never had the chance to plunder colonies. Germany, Italy, Sweden, Denmark and Japan had colonial empires for only the very briefest of moments, and their greatest eras of development came before and after those colonial episodes. Switzerland, Finland, and Austria never had colonies. And South Korea, Taiwan, Singapore and Hong Kong were themselves colonies of other powers. Yet today they are very rich. They did it not by theft, but by working hard, being creative, and having good institutions.

Amen. And notice that he also mentions the tiger economies of East Asia.

P.S. Given what I wrote the other day about the statist proclivities of the OECD, here’s an item that shouldn’t surprise anyone.

Even though South Africa already has an excessive burden of government, the Paris-based bureaucracy wants that nation to impose even higher taxes to fund even bigger government.

I’m not joking. The OECD just put out a document entitled, “How can South Africa’s tax system meet revenue raising challenges?” and here are some blurbs from the abstract.

…considerable revenues will be needed in the years ahead to expand social spending and infrastructure in order to raise growth and well-being. …there is some scope to raise further revenue, particularly through broadening the base of these taxes further. …An important additional source of revenue is environmentally related taxes.

Yup, you read correctly. The bureaucrats at the OECD want people to believe that South Africa’s main challenge is that government isn’t big enough. Heck, they actually want readers to believe that a more bloated public sector will “raise growth and well-being”.

Huh, bigger government is associated with more growth?!? I guess that’s why Singapore is so poor and Cuba is so rich.

What’s especially remarkable about the OECD’s anti-empirical approach is that fiscal policy is where South Africa get its lowest score in Economic Freedom of the World. It’s almost as if the tax-loving bureaucrats at the OECD are trying to keep that country from prospering.

And we’re subsidizing this nonsense to the tune of about $100 million per year.