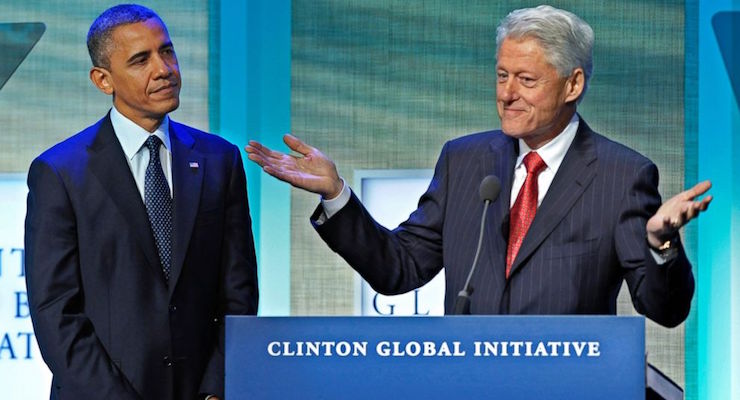 I wouldn’t be completely distraught to have Clinton in the White House in 2017. But before concluding that I’ve lost my mind, I’m thinking of Bill Clinton, not hisfar more statist (though similarly dodgy) spouse.

You’ll see what I mean below.

In a column for National Review, Deroy Murdock has some fun by pointing out that Bill Clinton just unintentionally attacked Barack Obama.

Why is this an attack against Obama?

For the simple reason that we haven’t had “broadly shared prosperity” during the Obama years.

…a far-left Democrat has been president for the past seven years. The economic stagnation that Clinton critiqued is Obama’s. In Obama’s first or second year, Clinton might have managed to blame Baby Bush’s massive spending, red tape, and nationalizations for America’s economic woes and middle-class anxieties. But in Obama’s seventh year, this excuse has rusted. Obamanomics has narrowed prosperity, dismantled the middle class, and snatched the American Dream from America’s kids.

In the 25 quarters since the Great Recession, Obama’s average, inflation-adjusted annual Gross Domestic Product growth has limped ahead at 2.2 percent. During Ronald Reagan’s equivalent interval, which began in the fourth quarter of 1982, such GDP growth galloped at 4.8 percent. …The total-output gap between Reagan and Obama is a whopping $10.6 trillion. …Under Reagan, private-sector jobs expanded 23.6 percent, versus the average recovery’s 17.0 percent, and 11.6 percent under Obama — less than half of Reagan’s performance. If Obama had equaled Reagan, America would enjoy some 12.9 million additional private-sector jobs. …Under Reagan, real after-tax income per person grew 3.1 percent, compared with 2.5 percent growth in an average recovery, and 1.2 percent under Obama. Had Obama delivered like Reagan, every American would have accumulated an extra $21,306 since June 2009.

All of this analysis is music to my ears and echoes some of the points I’ve made when comparing Reagan and Obama.

But I want to augment this analysis by adding Bill Clinton to the mix.

And I want to make this addition because there’s a very strong case to be made that we actually had fairly good policy during his tenure. Economic freedom increased because the one significantly bad piece of policy–the failed 1993 tax hike–was more than offset by lots of good policy.

Here’s a chart I put together showing the pro-market policies that were adopted during the Clinton years along with the one bad policy. Seems like a slam dunk.

At this point, I should acknowledge that none of this means that Bill Clinton deserves credit for the good policies. Most of the good reforms – such as 1990s spending restraint – were adopted in spite of what he wanted.

But at least he allowed those policies to go through. Unlike Obama, he was willing to be practical.

In any event, what matters is that we had better policy under Clinton than under Obama. And that’s why it’s useful to compare economic performance during those periods.

The Minneapolis Federal Reserve has a very interesting and useful webpage (at least to wonks) that allows users to compare various recoveries on the basis of GDP growth and job creation.

I’ve used this data to compare Reagan and Obama, so now let’s add the Clinton years to the mix. The following two charts from the Minneapolis Fed show the post-1981 recovery in blue, the post-1990 recovery in yellow, and the post-2007 recovery in red.

These numbers don’t match up exactly with when presidents took office, but it’s nonetheless apparent that we got the best performance under Reagan, and also that Clinton was much better than Obama.

Here’s the chart with the job numbers.

And here are the numbers for gross domestic product.

When the burden of government expands, like we saw with Jimmy Carter and Barack Obama on the Democrat side, but also with Richard Nixon, George H.W. Bush, and George W. Bush on the Republican side, the economy under-performs.

Similarly, when the burden of government is reduced, like we saw under Bill Clinton and Ronald Reagan, the economy enjoys relative prosperity.

More Poor-to-Rich Redistribution from the Wacky World of Washington