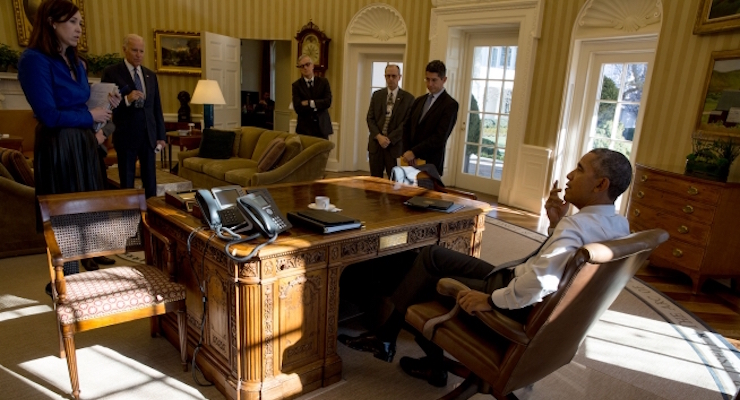 We have good news and bad news. The good news is that President Obama has unveiled his final budget. The bad news is that it’s a roadmap for an ever-growing burden of government spending. Here are the relevant details.

I guess the President doesn’t have any interest in complying with Mitchell’s Golden Rule, huh?

cliff?), the part of this budget that’s really galling is the enormous tax increase on oil.

As acknowledged in a report by USA Today, this means a big tax hike on ordinary Americans (for what it’s worth, remember that Obama promised never to raise their taxes).

Consumers will likely pay the price for President Obama’s proposed $10 tax per-barrel of oil, an administration official and a prominent analyst said Thursday. Energy companies will simply pass along the cost to consumers, Patrick DeHaan, senior petroleum analyst for GasBuddy.com, which tracks gas prices nationwide, said in an interview with USA TODAY. ….a 15-gallon fill-up would cost at least $2.76 more per day.  It would also affect people who use heating oil to warm their homes and diesel to fill their trucks.

Isn’t that wonderful. We’ll pay more to fill our tanks and heat our homes, and we’ll also pay more for everything that has oil as an input.

…the tax would raise about $65 billion a year when fully phased in. …The administration said it would devote $20 billion of the money raised to expand transit systems in cities, suburbs and rural areas; make high-speed rail a viable alternative to flying in major regional corridors and invest in new rail technologies like maglev; modernize the nation’s freight system; and expand the Transportation Investment Generating Economic Recovery program launched in the 2009 economic stimulus bill to support local projects. …The budget would also use roughly $10 billion per year in revenues for shifting how local and state governments design regional transportation projects. Obama would also propose investing just over $2 billion per year in “smart, clean vehicles” and aircraft.

By the way, the Administration is claiming that the big new energy tax won’t really hurt our pocketbooks because oil prices have been falling. Here are parts of a story by the Washington Examiner.

President Obama said the oil supply glut that has forced prices down to about $30 a barrel makes his proposal to levy a $10 per-barrel tax on crude oil timely. …the White House appears to be of the view that consumers would have an easier time paying it during record low prices.

Gee, how thoughtful of them.

But is anybody under the illusion that the politicians in Washington will repeal the tax when energy prices rise?

Here’s one last gem. As cited by the Los Angeles Times, the President offered this pithy statement.

“Rather than subsidize the past, we should invest in the future,” Obama said during his weekly Saturday address.

Now think about what he’s saying. Obama wants us to believe that the absence of a tax today and in the past is actually a subsidy!

Not that we should be surprised. Our friends on the left have a strange habit of arguing that we’re getting a subsidy when we’re allowed to keep our own money. Indeed, they even have a concept called “tax expenditures” that is based on that perverse notion.

P.S. The folks at Politico have a story about Obama’s plan, and there’s a bit of speculation about how it could become an issue for Hillary Clinton in the 2016 presidential race.

…the proposal could be particularly awkward for Hillary Clinton, who has embraced most of Obama’s policies but has also vowed to oppose any tax hikes on families earning less than $250,000 a year.

I think this analysis is absurd.

Hillary will promise all through the campaign that she opposes tax hikes on everyone other than the rich. But then, just like Obama, she’ll break that promise if she gets to the White House.

Accelerating on the Path to Greece with Bernie Sanders