HomePolicyAccelerating on the Path to Greece with Bernie Sanders

Accelerating on the Path to Greece with Bernie Sanders

Remember when I wrote about a week ago that I was somewhat optimistic about entitlement reform?

Well, given what just happened in New Hampshire, I must have been smoking crack. It would now be more accurate to say something will happen with entitlements, but it will be deform rather than reform.

That’s because a Bernie Sanders nomination victory followed by a win in November might pave the way for a massive expansion of government. Much of this would be a result of a single-payer healthcare scheme (oh, and don’t forget that the Republican victor in New Hampshire also has endorsed government-run healthcare).

Now that we have to take Senator Sanders seriously, let’s investigate his agenda.

Holman Jenkins of the Wall Street Journal is not a fan of the Vermont Senator’s statism.

His socialism is farcical in a country that can’t afford the entitlements it already has. …Mr. Sanders, far from being a radical departure, is merely a perfection of what Democrats have offered since the Clinton era, namely denial. Ignore the problem. If forced to acknowledge it, insist there’s no problem because the rich will pay. In the meantime, savage every reform proposal as an attack on “unmet needs.” Collect the political rents from serving as defender of every spending interest in our overcommitted republic. …Bernie…, for all his exotic pretenses, is just another machine Democrat.

I think Holman nails it. Sanders’ socialism is just a gimmick. He just a standard-issue redistributionist, and he doesn’t even have any idea of how to finance those empty promises.

Like many other leftists, Sanders presumably knows that “taxing the rich” doesn’t work because they can alter their behavior.

As Europe demonstrates, the only way to finance large government is to have big tax burdens on ordinary people.

Yes, Sanders endorses a few tax hikes on the middle class, but mostly he relies on unicorns and fairy dust.

Consider, for instance, his very prominent proposal for a single-payer health system. Avik Roy of Forbes digs into the details.

And what would all this cost?

That’s a huge expansion in the burden of government, even by Washington standards.

But Avik may be an optimist.

Also writing for Forbes, Professor Chris Conover of Duke thinks the spending increase would be even larger.

…the actual cost of the Sanders health plan will be at least 40% more than he claims. In the worst case, it will be 49% higher….In short, the Sanders health plan would require a 71% increase in federal spending over the next decade. …everyone with even a passing knowledge of economics knows that if you lower the cost of something, demand for it will increase.

Based on a RAND Corporation study, he looks at behavioral responses.

So the empirical question is how much of an increase in demand to expect from this expansion in coverage. …The HIE demonstrated convincingly that among those with “free” health of the sort being proposed by Senator Sanders–i.e., zero copays or deductibles–health spending was 32% higher compared to those who had been randomly assigned to a cost-sharing plan having no deductible but required patients to pay 25% of every bill up to a maximum out-of-pocket limit of $1,000 (about $1,972 in 2016 dollars. …the RAND study showed the actual figure will be more than 10 times that amount. Correcting this error adds $12 trillion to the cost of the Sanders plan (whoops!).

In effect, Conover is generating more accurate numbers based on dynamic analysis (in the same way advocates of dynamic scoring try to fix mistakes in revenue estimates that assume no behavioral responses).

He includes a pie chart is his column so readers can get a sense of proportion. 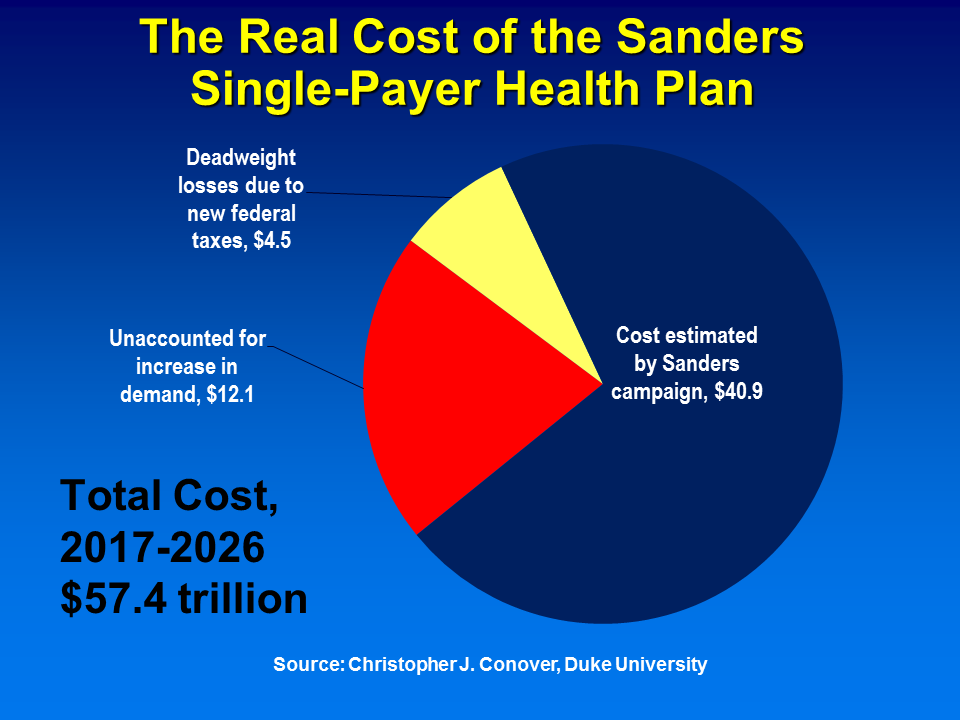 By the way, guess what? All the new spending will mean lots of new taxes.

…the actual increase in federal taxes required by the Sanders plan is $28 trillion over 10 years, not the $13.8 trillion originally estimated by Prof. Friedman. When we further adjust this figure to more realistically account for higher demand due to moral hazard, the figure comes to $36.3 trillion

Yet if you look at all the new taxes proposed by Senator Sanders (including those designed to finance other expansions of government), the total is nowhere near $28 trillion or $36 trillion.

So when you look at this horrifying list, which the Washington Examiner estimatesis a 47 percent increase in the tax burden, keep in mind that the actual increase would be larger and more pervasive.

And we shouldn’t forget that Senator Sanders wants lots of spending in other areas, not just government-run healthcare.

So everything you’ve already read is actually the best-case scenario.

P.S. These images (here, here, and here) tell you everything you need to know about socialism/statism vs markets/liberty.