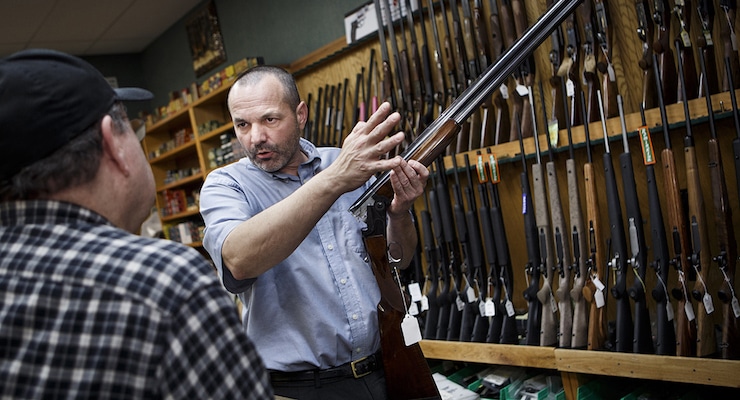 Redding Vice mayor and the owner of a gun shop Patrick Jones, right, shows a customer, John Robinson of Redding a shotgun in his store, February 19, 2013. Shasta County has the highest per-capita rate of gun background checks, indicating attempts to buy firearms, of any county in California, which has some of the nation’s strictest gun laws. (Photo: Dai Sugano/San Jose Mercury News/MCT)

For all his faults, you have to give President Obama credit for strong convictions. He’s generally misguided, but it’s perversely impressive to observe his relentless advocacy for higher taxes, bigger government, more intervention, and limits on constitutional freedoms.

That being said, his desire to “fundamentally transform” the United States leads him to decisions that run roughshod overcore principles of a civilized society such as the rule of law.

It doesn’t matter than these companies are engaged in legal activities. In pursuit of its ideological agenda, the White House is using regulatory bullying in hopes of getting banks to deny services to these businesses.

Well, there’s an international version of Operation Choke Point.It’s called “de-risking,” and it occurs when banks are pressured by regulators into cutting off banking services to certain regions.

The Wall Street Journal has a column on this topic by two adjunct professors from Fordham Law School.

…a widespread trend in banking called “de-risking.” Reacting to pressure by various government regulators…, banks are rejecting customers in risky regions and industries. Throughout 2014 J.P. Morgan Chase dropped more than 100,000 accounts because they were considered risky… Between 2013 and 2014, Standard Chartered closed 70,000 small and medium-size business accounts, and ended hundreds of relationships with banks in Latin America and Central Europe. …In yet another form of de-risking, the European Central Bank reports that banks have steadily cut their correspondent relationships—that is, the other banks they work with in sending money around the globe. HSBC alone closed more than 326 correspondent bank accounts between 2010 and 2012. …the banks’ actions are understandable. They face unprecedented regulatory penalties, unclear legal standards, high litigation costs and systemic risks to their business. In 2012 HSBC settled with the Justice Department, paying $1.9 billion in fines for such failings as “ignor[ing] the money laundering risks associated with doing business with certain Mexican customers.” …A bank with a single mistaken customer relationship could be put out of business. Banks have concluded that they will be punished anytime money reaches criminals, regardless of their own efforts. It’s better to drop all supposedly risky customers.

The authors explain that there should be “safe harbor” rules to protect both banks and their customers. That’s a very sensible suggestion.

And there are easy options to make this happen. I’m not a big fan of the Financial Action Task Force, which is an OECD-connected organization that ostensibly setsmoney-laundering rules for the world. Simply stated, the bureaucrats at FATF think there should be no human right to privacy. Moreover, FATF advocates harsh regulatory burdens that impose very high costs while producing miserly benefits.

That being said, if a nation is not on the FATF blacklist, that should be more than enough evidence that it imposes very onerous rules to guard against misbehavior.

Unfortunately, bureaucrats in the United States and Europe don’t actually seem interested in fighting money laundering. Or, to be more precise, it appears that their primary interest is to penalize places with low tax rates.

Many Caribbean jurisdictions, for instance, are being victimized by de-risking even though they comply with all the FATF rules. And this means they lose important correspondent relationships with larger banks.

To address this issue, the Organization of American States recently held a meeting to consider this topic. I was invited to address the delegations. And since other speakers dealt with the specific details of de-risking (you can watch the entire event by clicking here), I discussed the big-picture issue of how low-tax jurisdictions are being persecuted by harsh (and ever-changing) demands. Here are my remarks, with a few of my PowerPoint slides embedded in the video.

Now for the most remarkable (and disturbing) development from that meeting.

Many of the Caribbean nations offered a rather innocuous resolution in hopes of getting agreement that de-risking is a problem and that it would be a good idea if nations came up with clear rules to eliminate the problem.

Not exactly. The U.S. delegation actually scuttled the declaration by proposing alternative language that was based on the notion that other countries should put the blame on themselves – even though these nations already are complying with all the FATF rules! You can read the original declaration and proposed changes by the U.S. by clicking here, but this is the excerpt that really matters.

Wow, what arrogance and hypocrisy by the Obama appointees. These jurisdictions, most with black majorities, are suffering from ad hoc and discriminatory de-risking because the Administration doesn’t like the fact that they generally have low taxes.

But rather than openly state that they favor discrimination against low-tax nations, the political hacks put in place by the Obama White House proposed blame-the-victim language, thus ensuring that nothing would happen.

P.S. Perhaps the most surreal part of the experience is the strange bond I felt with the Venezuelan delegation. Regular readers know I’m not a fan of the statist and oppressive government in Caracas. But the Venezuelan delegation apparently takes great pleasure in opposing the position of the U.S. government, so we were sort of on the same side in the discussion. A very bizarre enemy-of-my-enemy-is-my-friend situation.