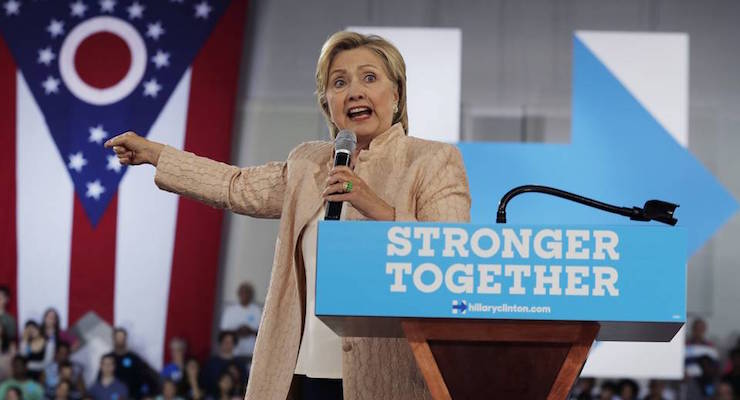 As part of her collection of class-warfare tax proposals, Hillary Clinton wants a big, destructive increase in the death tax.

This is very bad tax policy. In a good system, there shouldn’t be any double taxation of income that is saved and invested,

In a must-read column for the Wall Street Journal, Steven Entin of the Tax Foundation elaborates on why the death tax is pointlessly destructive. He starts by explaining that the tax is unfair.

…estate taxes are always double taxation. Estates are built with savings that have already been taxed as income, or soon will be. …The superrich can afford to give away assets during their lives or hire estate planners to help minimize the tax. …The main victims of the death tax are middle-income savers and small-business owners who die before transferring ownership to their children.

And because the tax reduces investment and wages, the revenue gained from imposing the tax is largely offset by lower income tax and payroll tax receipts.

The estate tax…produces so little revenue, only $19 billion last year. But because the tax has recoil effects, even this revenue is illusory. Because the tax reduces the stock of capital, it lowers the productivity of labor and reduces wages and employment. Much of the burden of the tax is shifted to working people. Research suggests that the estate tax depresses wages and employment enough to actually lowertotal federal revenue over time.

He then reports on some of the Tax Foundation’s analysis of the good things that happen if the tax is repealed.

…to eliminate the estate tax…would raise GDP by 0.7% over 10 years and create 142,000 full-time equivalent jobs. After-tax incomes for the bottom four-fifths of Americans would rise by 0.6% to 0.7%, mainly due to wage growth. …Revenue losses in the first six years would be almost entirely offset by gains later in the decade, with more gains thereafter. Both the public and the government would be net winners.

But he also warns of the bad things that will happen if Hillary’s class-warfare scheme is enacted.

Mrs. Clinton plans to lower the exempt amount to $3.5 million for estates and $1 million for gifts. She would raise the top rate to 45% for assets over $3.5 million, with further increases up to 65% for individual estates above $500 million. …Mrs. Clinton’s plan would lower GDP by 1% over 10 years and cost 194,000 full-time equivalent jobs. After-tax incomes for the bottom four-fifths of Americans would fall by 0.9% to 1%, due to slower wage growth. …the public and the government would be net losers.

The revenue numbers cited here also do not take into account increased efforts to avoid the tax. If these imaginative and highly productive people plan ahead to direct their assets to causes they deem worthy, rather than cede their wealth by default to the government, Washington will not see a dime from an estate-tax increase. …Mrs. Clinton’s plan would not so much redistribute wealth as destroy it. Everyone would lose except estate lawyers and life insurers.

Over the years, I’ve shared other research on the death tax, including a recent column on Hillary’s grave-robber plan, as well as my own modest efforts to impact the overall debate in print and on TV.

But my favorite bit of research on the death tax comes from Australia, where repeal of the tax created a natural experiment and scholars found that death rates were affected as successful people lived longer so they could protect family money from the tax collector.

An economist from the University of Chicago produced a study examining a policy change in Greece to determine what happens when taxes are reduced on the transfer of assets. Here’s a bit about her methodology.

And here are her results. As you can see, there’s a notable negative impact on investment.

…estimates reveal a negative effect of transfer taxes on post-succession investment for firms that are transferred within the family. In the presence of higher succession taxes, investment drops from 17.6% of property, plant, and equipment (PPE) the three years before succession to 9.7% of PPE the two years after. This impact of succession taxes on investment is economically large: the implied fall in the investment ratio (0.079) is approximately 40% of the pre-transition level of investment. For those firms, successions are also associated with a depletion of cash reserves, a decline in profitability, and slow sales growth. Note that to the extent that entrepreneurs can plan ahead for the succession and the related tax liability, the estimates I report in the paper provide an underestimate of the true effect of succession taxes.

Even academics who seem to support the death tax for ideological reasons admit that it undermines economic performance, as seen in this study published by the National Bureau of Economic Research.

…aggregate capital and income go up as the estate tax is lowered. When the labor income tax is used to balance the government budget constraints, for given prices, reducing estate taxation does not reduce the rate of return to savings for anyone in the population and still increases the return to leaving a bequest… As a result, aggregate capital goes up a bit more…and so does aggregate output.

By the way, the economists who produced this study constrained their analysis by assuming other taxes would have to be increased to compensate for any reduction in the death tax. To my knowledge, there’s not a single lawmaker who wants to raise other taxes while reducing or eliminating the tax. As such, the results in the above study almost certainly understate the economic benefits of reform.

If you don’t like reading academic studies and dealing with equations and jargon, here’s what you really need to know.

In other words, when politicians shoot at rich taxpayers, the rich taxpayers manage to dodge much of the incoming fire, but ordinary people like you and me suffer collateral damage.

Let’s close by shifting from economics to morality.

The death tax is odious in part because it is a pure (in a bad sense) form of double taxation, but it also is bad because the government shouldn’t be imposing double taxation simply because someone dies.

Actually, let’s add one more wrinkle to the discussion. If it’s immoral to impose tax simply because of a death, then it’s doubly immoral to impose such taxes while simultaneously (and hypocritically) taking steps to dodge the tax. 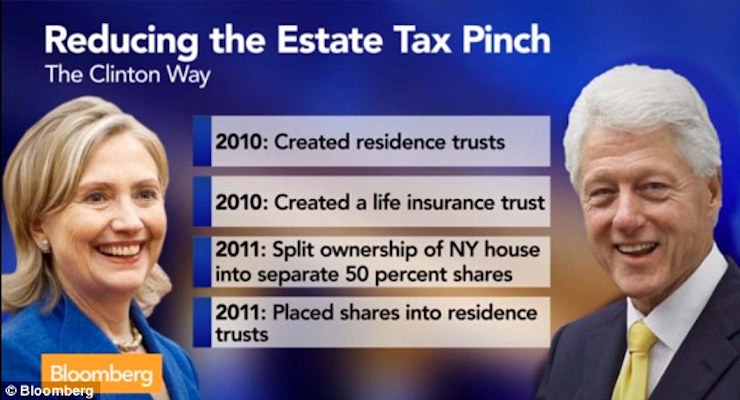 Hillary and Bill Clinton have done everything in their power to evade the death tax and wouldn’t be subjected to her new death tax plan.

Which is a good description of Hillary’s behavior, as reported by the Washington Examiner.

Bill and Hillary, like most millionaires whose wealth is mostly in housing and liquid assets, have engaged in sophisticated estate planning to avoid the death tax. …the Clintons placed their Chappaqua home — the one that housed the secret servers Hillary used to evade transparency laws — into two separate trusts. For complex reasons, this protects Chelsea from having to pay the estate tax when she inherits the house. …The Clintons also hold five life insurance policies, worth somewhere around $2 million. This is “designed to transfer assets outside of the estate,” one estate planner told Time. Life insurance payouts are generally exempt from death taxes.

Oh, and you probably won’t be surprised to learn that Hillary has close ties to the special interest cronyists who profit from the death tax.

The death tax brings in a paltry sum for Uncle Sam, but it provides a windfall for a couple of tiny segments of the economy: estate planners, and well-funded investors who buy out the family businesses threatened by the death tax. Jeff Ricchetti is a longtime Clinton confidant, a revolving-door corporate lobbyist on K Street, and a donor to all of Hillary Clinton’s campaigns. …Jeff has spent two decades lobbying to preserve and expand the death tax. In 1999, When Jeff cashed out of the Clinton administration, he joined the Podesta Group, co-founded by Clinton’s current campaign manager John Podesta. One client there: the American Council of Life Insurers, where Ricchetti lobbied in favor of taxing inheritances. …Life insurers, such as the members of ACLI and AALU, sell estate-planning products that could become worthless — or at least worth less — if parents were simply able to hand the fruits of their life’s work to their children. That’s why in April, TheTrustAdvisor.com ran a piece headlined “Estate Tax Repeal: Has Hillary Become the Estate Planner’s Best Friend?”

By the way, one of the main practitioners of cronyism is Hillary’s political ally, Warren Buffett.

Buffett advocates the death tax because it has been so very good to him over the years. To fully understand the depth of Buffett’s cynicism and self-interest, let’s take a look at how one might avoid paying the death tax. If you’re a wealthy person and want to steer clear of this tax, you have three options: Set up complicated trust arrangements, which mostly serve to enrich lawyers and merely delay and shift a tax that must eventually be paid; arrange for your estate to make tax-deductible contributions to charitable organizations; or plow your wealth into life insurance before you die. By law, when your heirs are paid the life-insurance disbursement, it’s tax-free. It doesn’t take a genius to see how certain industries could make a tidy profit off these death-tax escape hatches. In fact, some of the most ardent opponents of permanent death-tax repeal are (surprise, surprise) estate lawyers (who set up the trusts), charities (who fear their spigots of money turning off), and the life-insurance lobby (which does all it can to preserve its tax loopholes). Buffett has major investments in companies that sell life insurance. The death tax has helped make him rich while it has made other families poor. What’s sad and ironic is that it takes families with the resources of the Buffetts (and the Hiltons and the Kardashians) to set up the trusts and life-insurance schemes that are necessary to avoid paying the death tax.

P.S. Our death tax is even more punitive that the ones imposed by left-wing hell-holes such as Greece and Venezuela.