HomePolicyA Secret Glimpse at Life Inside a Bureaucracy

A Secret Glimpse at Life Inside a Bureaucracy 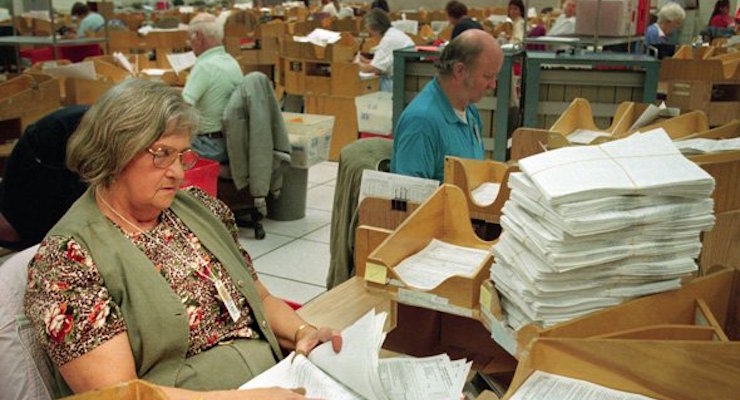 More than two years ago, I shared a couple of humorous images showing the languorous lifestyle of lazy bureaucrats. While those images were amusing, they didn’t really capture the true nature of bureaucracy.

For a more accurate look at life inside Leviathan, here’s a video showing an unfortunate woman trying to get a permit from a government agency.

It should probably be accompanied by a trigger warning lest it cause flashbacks for readers who have been in the same situation.

Very well done, I think you’ll agree. I especially like the subtle features of the video, such as the bureaucrat’s competitive desire to show his coworker that he won’t let a mere citizen prevail. And the part at the end showing the disappointment by all the bureaucrats also was a good touch.

Sadly, the story in the video isn’t just satire.

First, there are many absurd rules that require people to get permission from bureaucrats in order to work. All those laws and rules should be repealed. If consumers value certification and training, that can be handled by the private sector.

Second, it does seem as if bureaucrats relish the opportunity to torment taxpayers. I recall having to make four trips to the DMV when helping my oldest kid get his learner’s permit. Each time, I was told an additional bit of paperwork that was required, but at no point was I told all the forms and paperwork needed. Hence I had the pleasure of waiting in lines over and over again.

Though I did learn as time passed. By the time my last kid needed his permit, it only took two trips.

Since we’re on the topic of bureaucrat humor, regular readers know about the Bureaucrat Hall of Fame. Well, just as the Baseball Hall of Fame has a committee that looks back in time to find players who were overlooked and deserve membership, we need something to recognize deserving bureaucrats who somehow escaped my attention.

And if we travel back in time to 2013, John Beale of the Environmental Protection Agency (EPA) clearly can make a strong case that he belongs in the Hall of Fame.

The EPA’s highest-paid employee and a leading expert on climate change was sentenced to 32 months in federal prison Wednesday for lying to his bosses and saying he was a CIA spy working in Pakistan so he could avoid doing his real job. …Beale told the court…that he got a “rush” and a “sense of excitement” by telling people he was worked for the CIA. …He perpetrated his fraud largely by failing to show up at the EPA for months at a time, including one 18-month stretch starting in June 2011 when he did “absolutely no work,” as his lawyer acknowledged in a sentencing memo filed last week.

Though, in his defense, he wasn’t goofing off all the time.

He also spent time trying to learn about new ways to hinder the private sector.

…he used the time “trying to find ways to fine tune the capitalist system” to discourage companies from damaging the environment. “I spent a lot of time reading on that,” said Beale.

For what it’s worth, he probably spent most of his time figuring out how to bilk colleagues.

Nor was that Beale’s only deception, according to court documents. In 2008, Beale didn’t show up at the EPA for six months, telling his boss that he was part of a special multi-agency election-year project relating to “candidate security.” He billed the government $57,000 for five trips to California that were made purely “for personal reasons,” his lawyer acknowledged. (His parents lived there.) He also claimed to be suffering from malaria that he got while serving in Vietnam. According to his lawyer’s filing, he didn’t have malaria and never served in Vietnam. He told the story to EPA officials so he could get special handicap parking at a garage near EPA headquarters. …Beale took 33 airplane trips between 2003 and 2011, costing the government $266,190. On 70 percent of those, he traveled first class and stayed at high end hotels, charging more than twice the government’s allowed per diem limit. But his expense vouchers were routinely approved by another EPA official

Not surprisingly, the EPA took years to figure out something was amiss.

After all, why care about malfeasance when you’re spending other people’s money?

Beale was caught when he “retired” very publicly but kept drawing his large salary for another year and a half.

Heck, I’m surprised the EPA’s leadership didn’t award themselves bonuses for incompetence, like their counterparts at the Department of Veterans Affairs (VA) and the Internal Revenue Service (IRS).